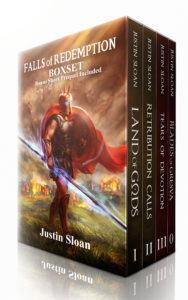 “Nonsense.” Semreh smiled up from a window ledge. He lowered himself over to an awning where he landed firmly and then slid down before jumping to another window ledge. “She’d probably be leading the adventure.” END_OF_DOCUMENT_TOKEN_TO_BE_REPLACED 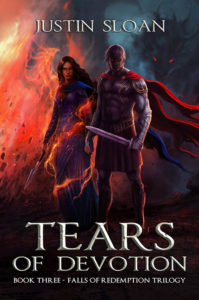 There it is, the complete trilogy! Oorah! It’s a bit dark, as you can see. I wanted to make sure that the readers of the first two books know what they’re getting into. While book 1 and 2 had dark moments, those were more about the journey of a young man who’s discovering who he is a man. Not any more – now it’s full on war, attempted assassinations, and yes, a bit of fantasy and magic.

Are you ready? You can buy it here.  END_OF_DOCUMENT_TOKEN_TO_BE_REPLACED

My Writing Process: Update on Tears of Devotion

The first book I ever wrote was what has now become two books — Land of Gods and Retribution Calls. These books came out to around 160,000 words combined, which isn’t massive in the world of fantasy books, but it was massive for me. So it makes sense that my largest endeavor yet would be to write the next book, TEARS OF DEVOTION.  END_OF_DOCUMENT_TOKEN_TO_BE_REPLACED