With a new zest for the fight, she charged into the cavern, her battle cry piercing the darkness. Now the creatures were falling left and right, but she noticed that the blue lights weren’t filling up quite as fast as before. When she came to a fork in the tunnels, a light appeared inches from her face and she nearly stumbled back, not expecting that. END_OF_DOCUMENT_TOKEN_TO_BE_REPLACED 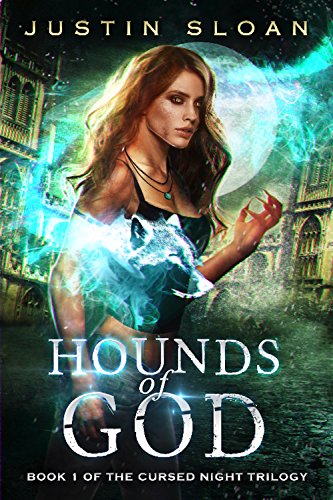 That’s right, Hounds of God released in Audiobook – the day before Hounds of Light comes out! That’s so exciting 🙂 I hope you’ll join me in doing a dance.

Or even better, check out the audiobook! You can hear a sample of it on Audio – Alicia Bade did an amazing job!

Oh, and you can get it free with a trial, or grab it with an Audible credit. Help it succeed, and show Alicia you appreciate her awesome narration.

Torn from her parents at a young age, Katherine is raised in a pack of werewolves like herself and brought into the ways of the Hounds of God, an army of werewolves that will bring justice to evildoers.

But when their leader is killed and everything Katherine has believed is thrown on its head, she sets off with a small group of friends in search of a cure to what she now believes is a curse.

This search for a cure leads her to a fight for survival where she’s challenged to embrace the beast within. Will she give up everything to stop the nefarious army of werewolves, betraying those she once considered family?