Hell, he was even a prince, and his sister was a princess! END_OF_DOCUMENT_TOKEN_TO_BE_REPLACED

She repeated herself, saying she had seen the remnant out there and come across a man who said he was with Laird Lokane. END_OF_DOCUMENT_TOKEN_TO_BE_REPLACED

Rhona strode forward, always pressing on, refusing to be the one to slow down the group. What had been a small group consisting of her brother and their companions plus the survivors they had found on Sair Talem had now grown to nearly one hundred.

They had the clan folk who had made it back to the main group, along with Laird Summers and his warriors. Plus, more warriors and clansfolk were likely out there still and just hadn’t found the main group…at least she hoped so.

Donnon walked beside her and his daughter Kia kept close to them. He still had that wild look in his eyes that he got every time his daughter was in danger. It didn’t matter that the girl was probably more powerful than he was, at least as far as her magic was concerned. Rhona had never had a child of her own, so she knew she couldn’t fully understand. The best she could do was think back to a small kitten that had wandered into the castle once when she was in her early teens. She had insisted it was hers, thought of it like another member of her family since her brother was always too busy training. END_OF_DOCUMENT_TOKEN_TO_BE_REPLACED 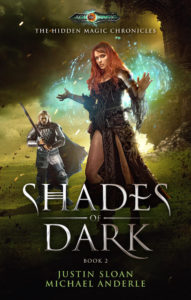 She finally gave up and, opening the door carefully to avoid waking her father, crept out into the early morning. The sun was still just a faint light beyond the clouds on the horizon, a distant glow that sent long shadows across the village. END_OF_DOCUMENT_TOKEN_TO_BE_REPLACED

The stars glittered in the night sky as the four riders left the village behind. Rhona rode next to Alastar, with Estair and Gordon single-file in back of them. Gordon had insisted he take the rear, to keep a lookout for anyone coming at them from behind. Estair was in the center so that she would be protected enough to shoot her arrows at attackers coming for their party from any direction.

While they all knew magic of one type or another, they figured it would take too long to cast and agreed that they should first use weapons if they were caught off-guard, both for speed of response and because magic was draining. They had to keep moving fast, since none of them knew when Master Irdin and his sorcerers might return.

Riding at night wasn’t easy on the horses, and more than once Rhona heard her brother mutter a curse as his horse nearly tripped. It was necessary, though, to leave at night, because they didn’t know who might be out there watching. They wanted to make as much progress as possible before sunrise, then rest and move on again around midday.

They rode in silence for some time, but when the moon was high overhead they paused to dismount and walk the horses to keep a low profile against the bright sky. Movement in the lands below them gave the impression of the ocean, but they hadn’t ridden nearly far enough yet for that.

Now that they were stationary and could focus their sight, it became clear it was an army moving on the ground below. Remnant, if Rhona had to guess. Even from here, the wind carried their stench—like moldy bread and mud. END_OF_DOCUMENT_TOKEN_TO_BE_REPLACED

Alastar laid on his back and closed his eyes for a moment, reveling in the speckled evening sunlight that made its way through the leaves above to warm his nude body.

Just yesterday he had been a paladin, chaste and pure. He would never have thought about lying with a clanswoman; he had considered all members of the clans his enemy.

But tonight, Estair was lying beside him, breasts exposed to the evening air, and he felt like he was the luckiest man in the world.

She opened her eyes with a moan, then turned to her side. She propped her head on one hand, moving the other to caress his chest.

She giggled. “You have dirt on your cheek.”

“I’m sure I have it in worse places than that,” he said with amusement.

She hit him playfully. “Don’t be dirty.”

He laughed out loud. “That’s a tough one, out here.”

For a moment he just laid there, enjoying the way her fingers played across his skin. When she stopped, he noticed the distant look in her eyes. “What is it?”

“You mean aside from us being about to ride off to our potential deaths?”

He smiled. “Aye, aside from that.”

“Isn’t that enough to worry you?”

“No,” he replied. “Because I’ve seen what we’re capable of when we all work together. You kicked butt back there, and my sister’s magic is unlike anything I’ve ever seen; anything any of us have seen.”

“And to think you used to be one of the people who would chop off a person’s head for using magic.” END_OF_DOCUMENT_TOKEN_TO_BE_REPLACED