Hell, he was even a prince, and his sister was a princess!

Somehow, all of that still didn’t make up for a lifetime of lies. A mother taken before her time, one he would never know.

But he knew what would make up what he had gone through so far. He thrust the sword into the ground and made a vow. He would stop this so-called goddess and reveal her for the fraud she was for all Roneland and beyond to see. She would never hurt another person. Never again tear a family apart. Not after he was done with her.

He glanced back at the sword and considered leaving it, but just then a door opened and a beam of light fell across him and the sword. It seemed to shine in that moment, to call out to him. As much as he wanted to leave his old superstitions and beliefs behind, he turned back the sword and wrapped his hand around the hilt with a glance at the person in the doorway. He recognized her by her shadow.

“You’re not with the others,” Estair noted, exiting and letting the door close behind her. “Why aren’t you training with them?”

“I had other matters to consider.”

She looked at the sword, pried his hand off the hilt, and held the hand to her lips. Her kiss was gentle, producing a smooth, tender sensation as those pouting lips brushed his skin.

“Playing with your sword all by yourself?” She smiled teasingly. “Have I neglected you so?”

He shook his head, appreciating her ability to always find humor in a moment, but it wasn’t the time for him.

Apparently catching onto this, she pulled his hand so that it wrapped around her waist, then leaned into him and put her head on his chest. “You have your father again. You should be happy.”

“For that and so many other reasons, I am,” he replied.

“As long as She is still out there, my thoughts will be troubled.” He held her tightly, watching as men passed the window in an upstairs corridor, visible for a moment as they laughed in merriment. “Laird Summers promised to be part of the march north to find Her, but he keeps stalling.”

“Stalling…” She pulled back, looking into his eyes. “We’re marching to war, essentially. Whether it’s war with the north or a larger force, we don’t know. You can’t expect that to happen without preparation, planning.”

“I expect to move on her before she has a chance to hurt more innocents,” he replied. “Before she can pull some more magical forces out of her arse and escape this unscathed.”

“Well, if we have to fight magical forces from her arse we’ll do so, dammit.” Estair couldn’t help but laugh at that. “Will they stink? You can bet all the saints and spirits in the world they will! But we’ll persevere, cram those evil magic forces so far back up her arse that—”

“Will you stop messing around?” he demanded. “I’m serious. Father said we would leave the next morning, and here we are still! We can’t’ sit around here waiting, not with what she’s capable of.”

“Let’s go kill that bitch.” She stepped past him, pulled the sword from the ground, and handed it over. “Don’t forget your sword, my prince.”

He couldn’t help but smile at that, but mostly because of the way she bowed when passing him the sword.

“Stop it,” he said as he took the sword and sheathed it. “If I become King someday, you realize what that will make you?”

She frowned. “Your mistress? Concubine? Don’t forget, we’re not…” Her voice caught as he pulled her in for a kiss.

“Not yet,” he said, laying a finger to her lips as they pulled apart. “But when this is all over, maybe that’s a discussion we should have?”

Her cheeks reddened and she shrugged. “Maybe it is.”

They turned, heading off hand in hand to find Laird Summers. No more waiting around—whether the troops were coming or not, Alastar meant to see this completed.

FROM JUSTIN >>> Again I have reached the end of a series, and it is both sad and exhilarating. I always feel like just curling up into a ball on the couch and watching some 80’s or 90’s movie after finishing a book, but especially a series. Maybe Point Break, Terminator, Back to the Future, or Die Hard? Some good ones right there! It is just draining, you know? All of the emotional involvement that goes into these stories, and all of a sudden…it’s over.

At any rate, this is book four in the series and completes the arch. It’s funny that a few people contacted me saying that the Sword of Light doesn’t glow green on the covers of the books like it’s described to do by legend… since it was pretty clear in the books that what he found may have been the legendary sword, but it didn’t have all of the magic legends say it did. So I play with that here, and (spoiler) later in the book. Ohhh, you’ll just have to read the book to see what I mean 🙂 I know, it’s evil, right? Mwahahah.

This book has some very fun crossover with PT Hylton’s books in the Age of Magic series, which I LOVE. And since today is release day for his fourth book, I believe, I want to take a moment to point everyone back to his series. If you haven’t read it and you’re waiting for my book, GO READ HIS NOW. That way you’ll see the crossover and enjoy it. Otherwise, go read his as soon as you’re done with mine (coming out on the 25th, by the way). Either way it should be a lot of fun.

So here’s PT’s fourth book in his series: 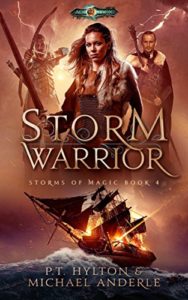 The greatest threat to the future comes from the secrets of the past.

Abbey and her friends return home after their long journey west to find Holdgate threatened by both an enemy to the south and a hidden Barskall army to the east.

Lucky for Holdgate, Abbey and the crew of The Foggy Day are more than ready to defend their home.

But there’s an even greater threat to the city… one nobody sees coming.

A man with a mysterious connection to Abbey’s past has arrived, and he wants to see the stormships burn.

He’s about to learn why it’s never a good idea to mess with Abbey’s friends.

Storm Warrior is a fun, swashbuckling romp filled with twists, adventure, and plenty of banter.

And don’t forget to grab the first three books in the Hidden Magic Chronicles (and review, if you feel like it. THANKS!)