The stars glittered in the night sky as the four riders left the village behind. Rhona rode next to Alastar, with Estair and Gordon single-file in back of them. Gordon had insisted he take the rear, to keep a lookout for anyone coming at them from behind. Estair was in the center so that she would be protected enough to shoot her arrows at attackers coming for their party from any direction.

While they all knew magic of one type or another, they figured it would take too long to cast and agreed that they should first use weapons if they were caught off-guard, both for speed of response and because magic was draining. They had to keep moving fast, since none of them knew when Master Irdin and his sorcerers might return.

Riding at night wasn’t easy on the horses, and more than once Rhona heard her brother mutter a curse as his horse nearly tripped. It was necessary, though, to leave at night, because they didn’t know who might be out there watching. They wanted to make as much progress as possible before sunrise, then rest and move on again around midday.

They rode in silence for some time, but when the moon was high overhead they paused to dismount and walk the horses to keep a low profile against the bright sky. Movement in the lands below them gave the impression of the ocean, but they hadn’t ridden nearly far enough yet for that.

Now that they were stationary and could focus their sight, it became clear it was an army moving on the ground below. Remnant, if Rhona had to guess. Even from here, the wind carried their stench—like moldy bread and mud.

“At least they’re headed north,” Gordon stated, “and not east.”

“If they’re headed in any actual direction,” Estair replied, pointing to a few that were starting to meander more to the northwest. As they watched, more and more started breaking off in that direction, then the rest of the group followed. “They seem to be moving at random, all going with the larger group, until a bunch split off in some other direction.”

“Point is, this group likely won’t block our path.”

She grunted. “That’s a plus, for us anyway. Not so much for any clans they might stumble across.”

“When it comes time, we’ll put together an army and push them back into hiding,” Alastar vowed. “They’re too dangerous to have walking about like this.”

A glow appeared from the far side of the group, then another, followed by the sound of someone shouting.

“What in the…?” Alastar craned his neck to see.

Rhona put a hand on her horse to keep her calm, straining her eyes. She knew what the glow was before she confirmed it.

“Paladins. They have the same idea as you, brother, but it seems they think they can do it on their own.”

Alastar grunted, but she could see in his eyes that he had a nascent longing to be out there with them, swinging his sword among his brothers-in-arms.

“You’ll be back with them when this is all over,” she reassured him, “if that’s what you want.”

Rhona glanced at Estair, who wore the same frown she imagined on her own face.

“There are good men among them,” Alastar declared. “Men who fight for what’s right, who stand for something.”

“I literally have no idea how to interpret that,” Alastar spat, his voice full of annoyance. “Are you telling me I should sit down to pee? Is that what clansmen do? The kilt helps with that, or—”

“No, you daft man.” Gordon pulled his horse back from the edge of the hill, and Rhona did the same so they could ride out of there before the scuffle below ended.

“He’s saying you can do good without the label,” Rhona offered. “I think.”

“By the Saint, can you all—” Alastar stopped abruptly, then took a step back.

Rhona wasn’t sure why until she glanced ahead and saw what he had seen—two dozen paladins, gold cloaks flapping in the night wind, white, polished armor bright as the moon in the night.

FROM JUSTIN >>> Some of you (if you follow me on my author Facebook page) might have seen that I was pretty out of it today. Woke up with my hip going crazy and had to walk around with a cane (if you see a pic of me, you’ll see I’m not nearly old enough for that to make sense. I have a weird story about that, actually. Once, a couple years ago, when this pain was acting up and I was using my cane to walk, I passed an old woman on the street who was using the same cane. I’m not sure why we noticed, but we both stood there, took note, and smiled. She pointed at my cane, nodded, and walked off. Okay, not much of a story, haha. But a funny occurrence – I think I was… early thirties? So, yeah…

The point of this? I’m glad I finished this and the other book in advance, because my mind was WAY not in productive mode today. (the other book being Reclaiming Honor 5 – Born into Flames).

And for my recommendation, I thought I’d mention Joe Jackson’s — 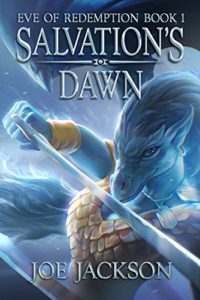 The War was over, the Devil Queen cast down…

In the wake of the Apocalypse, veteran demonhunter Karian Vanador understands that the vigilance of her Order leaves little time for leisure. Even as one paragon of darkness is cast down, Kari knows it won’t be long before another rears its head.

For the Order, after all, the War never ends.

With demons threatening invasion once more, Kari soon finds herself lunging headfirst into danger again. It is the life she’s chosen, the only path she really knows. She fights with savage passion, defending her convictions despite the varied trials awaiting her there in the dark. Tests of friendship. The fires of love. The heat of battle. Even the limits of her own faith. Through these, though, Kari will seek the answer to a question that has ripped at her mind for eight long years:

“Why was I resurrected?”