She repeated herself, saying she had seen the remnant out there and come across a man who said he was with Laird Lokane.

Donnon rubbed his temple and shook his head. “Remind me to scold you later for being out there without one of us.”

“You’re gonna hold my hand whenever I have to pee?” she asked, glaring.

“Something tells me that was not what you were doing,” Rhona replied, and the girl’s frown vanished, quickly replaced with a sheepish grin.

“Fine. Point is, they’re in trouble.”

Alastar turned to the spot where he’d laid down to sleep and grabbed his sword and armor. As he readied himself, he said, “Let’s get to it then.” Turning to address the rest of them, he continued, “You all heard her. There’re remnant out there that mean to do harm to humans. We won’t stand by and let that happen.

Summers was there a moment later, Estair at his side.

“Lair Lokane is no friend of mine,” Summers said, folding his arms.

“Well, he is of mine,” Estair argued, earning her a truly annoyed glare from the man. “And I’ll go to his defense.”

“We’re in no condition to run off to a fight right now,” Summers replied. “Let them fend for themselves, while we—”

“Dear,” Donnon said, holding her arm. “We mustn’t speak to a laird so. But…” He looked for his weapon and then found it. As he picked it up, he continued, “She’s right, sir.”

Summers’ face went beet-red and he grumbled something under his breath. With a wave of his hand, he said, “Forget our safety when there’s glory and honor to be had.”

Alastar laughed, but quickly hid the amusement. He knew going to the defense of the others was without question the right thing to do here, but he didn’t want to get on the laird’s bad side.

Instead, he turned to Kia. “Lead the way.”

“I think you mean ‘point the way,’” Donnon corrected him.

Kia shook her head. “I’m part of this battle whether you like it or not, Dad.”

Donnon’s mouth fell open and he looked to the others for support, but Alastar just shrugged.

“She’s one of our most powerful magic users,” he noted.

“You’re all out to send me to an early grave,” Donnon said, wiping his brow before turning to his daughter and nodding. “Fine, but you stay in the rear. If you were to get hurt, I’d never forgive myself.”

“Trust me, Dad, I’m not a huge fan of pain.” She smiled and turned back the way she had come, shouting, “Try to keep up, old man.”

“She really is going to give me a heart attack,” Donnon remarked as he ran after her, battle ax in hand and the others close behind.

As Alastar sprinted, doing his best to hold his long sword at his side so it didn’t bounce around too much, he noted the hint of a smile on his sister’s face.

“I’m not allowed to smile when running into a fight?”

He laughed. “Is that who you are now?”

“Not exactly, no,” she admitted, “but it’s a relief to be going up against remnant instead of an army of sorcerers, wouldn’t you say?”

He had to agree with that, especially since the two of them were still figuring out how their magic worked. Maybe if they’d had more time to train or someone to show them how to use their magic, they wouldn’t have had to retreat after defeating the High Paladin.

Part of him still didn’t believe that was over, that he had slain the man he had looked up to for so long. Sir Gildon had been the closest thing Alastar had to a father; the only one who knew how to really use the power of light. And he’d been a liar, a murderer, and a traitor to his people.

Alastar would have been happy to go up against the paladins to teach them a lesson about loyalty and what was right in this world. Dealing with an army of remnant would have to do—for now.

A shout and then a burst of flame came from ahead.

More shouts, and then a flaming remnant stumbled toward him.

FROM JUSTIN >>> I thought I’d end as the action starts this time, since I rarely do that. The book launches tomorrow, so… let’s see what happens then! Of course it’s in KU, so if you’re a KU subscriber, please grab it essentially free. Otherwise, it will be $0.99 for one day only. That’s another great way to get it.

I’ve been reading a lot lately, and am very excited for PT’s third book in his series. Go grab that one if you haven’t, because certain aspects carry over to my books and vice-versa (including some Valerie things in his that you might find fun if you read my Reclaiming Honor books — a warning though: They’re subtle, so pay close attention).

In other news, I have a screenplay that’s been moving forward, and I hear that Telltale is doing GoT season 2 (the game)! This is huge, because one reason I didn’t want to stick around there was season 1 was done and it didn’t seem like there would be a season 2. Glad to hear they’re smart enough to do it!

As for other books to read, have you seen Michael-Scott Earle’s new collaboration with Samuel E. Green? It’s got fantasy and scifi, and if you’re anything like me, you’re a sucker for that combination. Check it out! 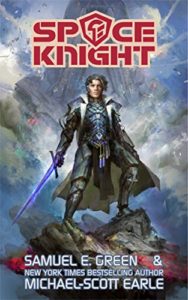 In a universe where technology and magic co-exist, Nicholas Lyons desires one thing: to serve his queen as a Space Knight in the Royal Trident Forces. But when his final mission as an Academy cadet goes horribly wrong, Nicholas discovers he possesses illegal magical abilities that grant him power far beyond that of a normal man, knight, or mage.

When a clandestine assignment lands Nicholas on the worst starship in the kingdom’s fleet, he finds a motley crew of warriors hiding their own terrible secret. Death and betrayal lurk around every corner, and Nicholas finds himself torn between his loyalties to his new crew, or the oath he swore to his queen.

And death no matter which choice he makes.