Gara Grayhewn stepped out her front door at the same time she did every morning. She stood on her porch for a moment observing the house-like structures around her, many of whose residents also stood outside. Most were Skulla or Pallicons, though some had been genetically modified so drastically that it was difficult to identify their races.

A casual observer might think this was a normal neighborhood instead of a cellblock in the star system’s most secure prison.

Gara had been incarcerated on SEDE for nearly thirty years, and sometimes she forgot it was a prison too—but those moments didn’t last long. And they hadn’t come at all since her son Kalan been brought back a little over a month before.

Since then her every waking thought had been dedicated to one thing: getting Kalan out of SEDE…again. END_OF_DOCUMENT_TOKEN_TO_BE_REPLACED

SNIPPET 1 of Valerie’s Elites 2 – DEATH DEFIED
We put it over on PT’s site this time, so head over and check out my coauthor while you’re at it!
http://www.pthylton.com/death-defied-valeries-elites-book-2/
Check it out 🙂

The passengers were mostly Skulla, but there were a few Pallicons too. He’d always envied Pallicons a little. They were shapeshifters, and Kalan would have given anything to be able to do that. END_OF_DOCUMENT_TOKEN_TO_BE_REPLACED

At the name, the aliens’ postures instantly got less aggressive and they looked at her with wide, intrigued eyes.

“You… You think you can compete in the Damu Michezo?” the lead one asked.

Valerie had to laugh. “I’m pretty sure I’ll be fine.”

The alien cracked his neck, pounded on his stone carapace, and said, “Show me.”

“You beat me, I’ll point you in the right direction. In fact, there was a shuttle headed for the planet it’s held on not long ago. You might still be able to catch it, or at least chase it down and follow. Are you up to it?”

Robin smiled at Valerie, then shrugged and took a step back.

He scoffed. “I’ll tell you a little secret…no one has ever hurt me. You? I won’t worry. Come.”

Valerie tossed her rifle to Robin, and then her sword. She heard pounding and she turned back to see Qwaza charging damn fast. Valerie had fought her fair share of vampires and Weres on Earth, so she was used to speed. With a quick sidestep, she brought around her leg to sweep him. What she hadn’t counted on was his next move, which involved a fast sideways roll to compensate for her new location. He came up like a boulder, unraveling as he regained his footing, and slammed his forehead right into hers. END_OF_DOCUMENT_TOKEN_TO_BE_REPLACED

The Singlaxian Grandeur touched down on the first planet in the Vurugu system, an uncharted habitable sector at the edge of the known universe. All atmospheric tests were nominal, and with only the slightest trepidation Valerie hit the button to open the ship’s doors.

Her first breath of air on this planet brought back memories of the mountains around the fjords back on Earth—cleaner than anything she had experienced until that point, and this had it beat. It carried an interesting scent, like cinnamon.

Not that she was from the fjords. No, she had been born in Old France, before moving to what had once been America and helping to reestablish New York. She had worked hard to bring peace to her corner of Earth, and now the universe called to her. END_OF_DOCUMENT_TOKEN_TO_BE_REPLACED

GATEWAY TO THE UNIVERSE – SNIPPET 1 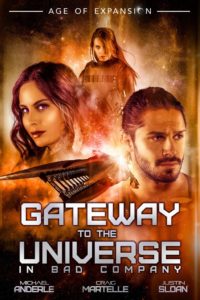 Valerie and Robin emerged from the transport ship, following closely behind Michael as he led them into the ArchAngel II, the large ship they had seen from the ground when Michael had picked them up.

It was still almost unbelievable that she had left her friends behind, all but Robin.

The woman at her side, barely a woman at all, if you counted her actual age instead of looking at her through the lens of all she had done.

Now it was the two of them leaving the comfort of their homes behind to go off and join Michael in the fight for humanity’s survival from a different angle—from space.

Only, as Michael had just explained to them, they had signed up for more than anything than they could have fathomed before his explanation. END_OF_DOCUMENT_TOKEN_TO_BE_REPLACED