The Singlaxian Grandeur touched down on the first planet in the Vurugu system, an uncharted habitable sector at the edge of the known universe. All atmospheric tests were nominal, and with only the slightest trepidation Valerie hit the button to open the ship’s doors.

Her first breath of air on this planet brought back memories of the mountains around the fjords back on Earth—cleaner than anything she had experienced until that point, and this had it beat. It carried an interesting scent, like cinnamon.

Not that she was from the fjords. No, she had been born in Old France, before moving to what had once been America and helping to reestablish New York. She had worked hard to bring peace to her corner of Earth, and now the universe called to her.

This was the first planet she had been on out here, her first step toward accomplishing her mission for the Etheric Federation. The legendary vampire Michael had made her a Justice Enforcer on Earth, one of his own, and when the time came he had asked her to join Colonel Terry Henry Walton and Bad Company. Her first assignment was to take a small team to this system and collect intel, the ultimate goal being to ensure that the inhabitants of this system joined the Etheric Federation in its war against any race that would see the people of Earth or other innocent races harmed.

They had landed in a secluded area under the cover of trees unlike anything she had ever seen. In a sense the leaves reminded her of umbrellas, spreading in every direction from upturned branches covered in blood-red bark. Since the leaves dripped a sap-like substance she decided to call this the “Bleeding Woods,” an all-too-appropriate name for the landing spot of two former vampires and their team.

Former vampires, in her mind, because it was hard to think of them as such anymore. There was a time when both Valerie and Robin would have avoided the sun and drunk blood to stay energized, but such requirements had vanished.

Michael had changed Valerie with his blood, and Robin had been given fancy Etheric Federation Pod-doc upgrades.

When Valerie stepped onto the alien soil she couldn’t help but feel overwhelmed. Her whole life had been spent on Earth, but she’d left it behind to join the fight. To ensure Earth was safe.

Only problem was, she didn’t know where to start. They had the intel file Colonel Walton had given her and she could call him whenever she wanted—in theory—but that wasn’t exactly her style. She didn’t want to be the one who started the first mission of her new job by calling the boss to ask for direction.

Valerie resolved to get this done on her own. Her team may not have had fancy Jean Duke Specials, and their ship may not have been the most advanced in the Etheric Federation, but the team had grit. And with the types of jobs they’d be tackling, grit was the most important thing.

“Is it safe?” A head popped out of the doorway, a man with a flat nose and beady eyes. Bob. She still wasn’t sure what to think about him. “I mean, for us…non-vampires.

“I’ve explained this. I’m not technically a—”

“Yeah, yeah, not really a vampire. Except that you have drunk blood using your fangs before to sustain your lifeforce, correct? And you weren’t able to go into the sun.”

“Shut up,” she replied, turning again to analyze their surroundings. She heard a shuffling noise among the trees.

She severely wanted to punch Bob right now, but he’d been modified in the Pod-doc too. While on Earth only vampires and Weres could use the power she now understood to be Etheric energy, but up here she had to get used to other people being enhanced.

If she punched him it probably wouldn’t hurt nearly as much as she would want it to, so she opted to just ignore the man. It was her fault, after all—his being here. He had been released from his service as the Pod technician on the other ship, so when Valerie picked her team—dubbed “Valerie’s Elites”—she figured she’d give him a second chance. The idea made sense if she ignored what a dick he was, focusing instead on his technical knowhow.

But he was still talking, even though she kept ignoring him.

That was the problem with dicks. They just keep pounding relentlessly away. Would he ever give up? Finally she turned and pushed fear, one of the talents she possessed but he lacked. It was enough to make his eyes go wide and his jaw clench shut.

Not enough to make him shit himself, though she would have to consider that next time. This, along with being able to read emotions like an aura, separated her from the rest of them. Even Robin, who had received many modifications, didn’t have any abilities like that yet.

The timing was perfect too, because just then the shuffling in the trees came again, along with a stronger scent of incense as red dust flew past. Her best guess was it came from the trees, and could be rubbed off.

She held up a hand for the others to stay put and be quiet. A yelp came from the direction where she guessed her enemy was—if it was an enemy.

Valerie crouched as she ran, then unslung her rifle and knelt next to one of the thicker trees. Instantly a puff of grey spores flew up around her, and she cursed under her breath. It was too late—whatever had made the noise spotted her and charged.

It appeared at first to be a rhino, but then she saw it was a large bipedal figure covered in thick slabs of rock.

She braced herself. As it collided, she rolled back and kicked upward, sending it over her shoulder. Normally that would have sent a full-grown man sailing, but given his weight this male just kind of flopped over and landed with a thud.

Two more of them appeared and charged her, and Robin leaped through the air to tackle one. It braced itself, and she hit it with an oomph before falling onto her butt.

Damn. She knew that Robin was stronger than most vampires—or former vampires. That meant these aliens were tough.

“What are they?” one of the aliens said to another.

“Monsters, or maybe demons,” the third said, doing his best to stand but flailing like a turtle.

Valerie and the rest of her team had had a chip implanted that translated most languages, and apparently this one was included.

“More like emissaries,” Valerie stated, glad to find her chip translating. “We’re not here to fight you.”

One of them turned to her with a look of defiance, then positioned himself like a bull about to charge.

She lifted her rifle and aimed at him—it had to be a male with that attitude. “I don’t think I made myself clear. We’ve just arrived, and we’re looking for a contest of champions. Perhaps you’ve heard of it? I’m told it’s called the—correct me if I say this wrong—Damu Michezo.”

FROM JUSTIN >>> This is it, at long last – Valerie is in space! I’m loving it, and have had a blast writing with PT Hylton so far. We had a chance to meet up in Vegas recently for the 20Books conference (and no, I didn’t go to the strip aside from our big networking dinner – which was amazing!). It was really cool brainstorming this story with him in person, as well as meeting Michael and being able to finally chat face to face.

We have big plans for the first four books in this series, and it’s going to get CRAZY. You’ll see 🙂 But to get you primed, here’s a little taste. More to follow shortly!

And since I like to promote other books, I want to make sure you haven’t missed the Bring the Thunder snippets. You can check it out on Amazon (and it’s in KU, of course).

Because the universe can’t save itself.

When others run from danger, Riot runs toward it.

When others throw up, she throws down.

And when there’s a brawl in a bar, well … she’s probably the one who caused it.

But now, the person voted least likely not to blow stuff up by her unit has been given another mission: explore the universe and forge bonds with new alien races in order to save Earth from another invasion.

Backed by her ride or die crew – the only guys she’d trust on a mission such as this – and a scientist, because, well, science, Riot blasts off in a spaceship headed to distant galaxies, the fate of the planet resting on her shoulders.

Bring the thunder is a fantastical space marine adventure with rollercoaster-like action and the kind of snarky humor you’ve come to love in movies like guardians of the galaxy.

If you like the whiplash action of The Ember War and the ridiculousness of We Are Legion (We Are Bob), then you’ll be obsessed with the War Wolves series.

Get your copy today to blast off to non-stop fun and war-games.

And if you’ve never read the first 8 Valerie books, check them out too! 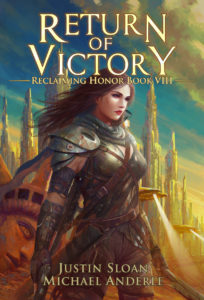