You are the Hounds of God. Through your deeds, all sins will be corrected, all wrongs righted, and the evildoers of the world will cower in fear at your feet.

Katherine pulled at her dusty leather jacket to fend off the cold wind’s bite, mind racing at the possibilities of what they’d find in these mountains. A cure? More clues? As long as it wasn’t simply another dead end, she’d accept anything.

With each leap over rocks and along the mountain path, she became increasingly annoyed at the bounce of her ponytail. One of these days, she’d just shave it all off and be done with it. She liked to tell herself it didn’t matter what Danny would think if she did, but she often found herself taking the extra minute each morning to look her best, even if she knew they’d be searching freezing mountains for hidden caverns—as they were this day.

Searching, and probably ending up disappointed—again.

The years had been a mixture of hope and defeat. Nine years of looking for answers as to why she’d become a werewolf. Nine years of hoping to find a cure, but always coming up empty-handed.

She had only two companions left at this point—Babur and Danny. During their search, they’d found myths of wolf spirits taking over one’s body, and of Native Americans who had called upon these spirits for help. So far, they’d dismissed the European stories of villagers transforming in the night to fight off the evil witches, or going into Hell to keep the demons at bay—they had to draw the line somewhere between plausible and ridiculous.

In these days of the internet, there was no shortage of stories and theories. Yet, in all their searches, they hadn’t come across anything regarding the cure she longed for. The myths were their best bet, and they had led them to the mountains of Washington State.

She slowed at a fallen tree she’d noted earlier as a marker, smiling to see Danny crouching nearby and inspecting the area. His tan leather jacket was covered with dust, and a layer of sweat shone from his forehead.

When he turned to grin up at her, his white teeth gleamed in the dim light of dusk.

She motioned for him to keep up as she led him back to the small cave she had discovered. This could be it, she thought, as he knelt down and kicked at the clods of dirt that blocked the entrance. They broke apart to reveal stone steps leading down, chipped and worn.

“You think it’s down there?” he asked. She could tell he was trying to keep the hope out of his voice. Like her, he’d been disappointed many times, too.

“There’s only one way to find out.”

She tested the first step, gingerly putting her weight on it until she was sure it wouldn’t give way. The steps were sturdy, carved directly into the large rock surface below them. They each pulled flashlights from their packs, and she led the way as they descended.

At the bottom of the stairs, they found a large room. Shelves were carved into the walls, holding clay pots and dried herbs.

“Nice work,” Danny said, looking up at a faded mural on the wall.

Katherine came over, shining her light to better see the mural. It appeared to be a man cowering before a giant wolf. Her hands felt suddenly clammy, her heart thumping so loudly it seemed to echo off the walls.

“Don’t get your hopes up,” Danny said with a glance her way. “You always do.”

“And one of these days, it’ll be for the right reason,” she said, her finger brushing the stone wall of the mural. “There’s got to be something here.”

The rest of the room held more stone walls and murals in a small circle. The familiar frustration of this being only one more dead end of many was rising, and she began wondering if she would ever find the answers she needed.

Danny’s voice broke through her dismal thoughts. “Over here.”

He was kneeling next to one of the ledges. At its base, he had moved aside a large stone to reveal a tunnel just wide enough for a person to crawl through.

“You’ve gotta be kidding,” Katherine said. “I’m not crawling through that.”

“Well, I’ll holler back when I’ve found the cure, then,” Danny said as he dropped to his belly. He pushed his pack ahead of him and scooted forward, soon disappearing into the tunnel.

Katherine stood there, thinking how stupid she would have to be to go in there, but also how much she’d regret not going. With a silent curse, she dropped to her belly and scooted in after him. Darkness surrounded her, except for the dim light of his flashlight bobbing ahead. She held hers in front of her, and the sight of the stone tunnel so close around her was almost worse than the darkness. It reminded her of an MRI machine, or maybe a casket.

She pushed that thought aside as quickly as possible.

Darkness didn’t usually make her uneasy. When the sun set, she could see better than others, move faster, and have an advantage on any opponent out there—man or werewolf. Trapped in the dark of the tunnel, her memories came rushing back: horrible images flashing across her mind of that morning long ago when she’d found her parents dead. That had been her first transformation. She’d wanted to throw her life away, but then Danny had come along with the rest of Aldrick’s pack, and Aldrick had taught her that her curse could be a blessing. She had a duty, as they all did, to use their powers to stop evil in the world.

And then a man they called “Hunter” had attacked Aldrick and shattered everything Katherine had begun to believe in. The house had caught fire during the fight, and Aldrick had died in the flames. Aldrick’s werewolves had parted ways that wet, cold morning, and she was glad Danny had sided with her instead of the traitor, Gregor, and his pack.

“You’re almost there,” he said, his face appearing not far off, the light aimed at himself. “Come on, you got it.”

She reached him, and he helped her down the small drop-off. When she was back on her feet, she gathered her nerves and breathed deeply, reminding herself she wasn’t trapped, she was going to find the cure. She hoped.

It appeared they were now in some sort of inner chamber. They walked its perimeter, the circle of wall reaching up to form a dome over their heads. Immense marble columns loomed at six points along the walls.

Danny was at a large, crumbled rock that may have once been a throne. He dropped his pack and looked at her with a raised eyebrow. “It’s like the New Mexico caverns, the crypts of Louisiana….”

“Don’t say it,” she said, desperately searching for any sign that they were in the right place.

“It’s all dead ends, Kat.” He approached the center of the room, holding his light up to better see the dome above, and nearly tripped on something at his feet.

“What’s that?” she asked, walking over to take a look. She knelt beside a low circle of rocks. It was shaped like a well, but the stone surface of its floor wasn’t far down. Curious, she traced it with her fingers, then noticed a layer of dust covering an engraving beneath. She brushed aside the dust with the palm of her hand, and her heart skipped a beat. “The star.”

“It could be any star,” Danny said, but his voice betrayed his hope.

He knelt next to her, putting a hand on hers. She felt a chill run up her arm. “And if it’s not?”

She put her hand on the star in the center of the stone well, then pushed. It wasn’t solid, not completely. She knocked—hollow.

Even Danny’s eyes were shining with excitement now.

“Should we get back to Babur?” he asked.

“Not until we know it’s actually something.”

She stood and kicked at the star. It broke away, nearly taking her with it, but Danny caught her. They looked into the darkness below, hearing the rocks clatter at the bottom.

“The rope,” Danny said, going to his pack.

He secured the rope to one of the marble pillars, and they lowered themselves through the hole. Below, the hole expanded into a room of darkness that, when they shone their flashlights around, appeared to be a vast chamber.

“The natives worshiped here?” she said, thinking how horrible it would be to come down into this darkness more than once.

Danny reached the bottom and held the rope steady for her to dismount, then turned with his light to take a look around. Something ahead glistened in its beam. As they approached, they saw a glow, rippling and reflecting on the cave ceiling. An underground pool of water.

For a moment they stood, staring at the water.

“So much for your cure,” Danny said. “Sometimes, you have to know when to quit.”

He turned to head back, but stopped. She glanced over her shoulder to see something moving in the darkness. She held up her light, and then froze at the sight.

They wore Special Forces gear, all black, with pistols strapped to their thighs and rifles in their hands. One stood before them on the ground, and two more were climbing down the rope.

FROM JUSTIN >>> At long last I bring you a snippet from HOUNDS OF GOD. This novel started as a screenplay six years ago, and many of my screenwriting buddies thought it was my best. So I’m super excited to finally be releasing the novel. At one point I saw it as my Dark Knight (Batman) but as a female werwolf – so kind of a dark superhero coming of age story. Wonder how you’ll see it!

And because we always promote someone else after these things, how about I tell you about my good buddy Michael Scott Earle? He has a new Urban Fantasy coming out, and you can also get that for $0.99 on preorder! 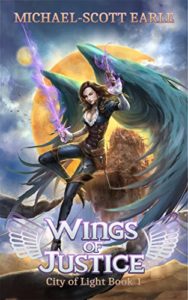 Welcome to Petrasada. The City of Light. The City of Clouds. The City of Joy. It is the last bastion of human life floating miles above an endless desert world.

And a string of serial murders are threatening to tear the city apart.

Anelia Orba is the newest rookie in the magical winged police force of Petrasada. She is inexperienced, naive, paired with a resentful partner, and fully expected to fail. But when a strange clue takes Anelia off the procedural path, she’ll have to overcome the odds before the City of Light falls to darkness, and she loses everything she cares about.

Michael is awesome, and so is his writing. I love his book The Destroyer, and am sure he’s going to bring it with this one as well.

So there you have it! Pick up Michael-Scott Earle’s new book, or my fun werewolf novel HOUNDS OF GOD, each for $0.99!