Danny ignored the burning in his leg, pushing on through the woods. The bullet had merely grazed him, tearing a line in his pants and drawing a sliver of blood. Nothing worth whining over.

The soldiers or whatever they were—Gregor’s men, most likely—were drawing close, he could tell by the flutter of a bird one moment, a not-so-distant curse the next. They might have been wearing special operations gear, but they certainly weren’t military trained, that much was clear.

Still, if they caught him or Kat, who knows what would happen.

At a clearing, Danny side-stepped and changed direction. If he continued straight, they wouldn’t even have to track him, but just keep running. This way, he’d be able to test his theory about them being untrained.

He found a rocky ledge and darted around to a slope that led him up, then at the top threw himself flat on the ground and watched, waiting.

Sure enough, a couple of soldiers kept on moving the direction he’d been heading.

One stopped, then sniffed the air.

Danny leaped up and turned to run, noticing the jerk of the man’s head as he did so. They weren’t just ordinary people, or at least not this one.

Running in this part of the woods was difficult, considering there were no paths and most of the ground was overgrown with berry patches and ferns. Danny threw himself over a fallen tree, using a hand to push off so as not to waste time climbing. A barely-visible stream nearly caused him to trip, but he recovered and was at the other side before a heavy force collided with his side and threw him to the ground.

The soldier landed an elbow across Danny’s jaw, causing stars to dance across the forest. When he raised himself for a second blow, Danny was ready—a slight shift of his body to the right gave him enough room to dodge the strike and gain enough leverage to throw his forearm against the man’s elbow while his other hand pulled. With a loud CRACK the soldier’s arm was bent backwards, he was grunting in pain.

To his credit, the soldier didn’t give up there. Even as Danny was scrambling to his feet, the soldier tackled him and, with his good arm reached for his gun.

This was the part Danny hated. When the guns came out, it meant someone had to die. Danny made sure it wasn’t him by spinning to kick the gun aside and then tossing the man into the small stream, where he held him, arms burning with the effort of fighting against the man’s last attempts to breathe, until the body was limp.

When it was over, Danny rolled aside and stared up at the blue sky barely visible through the tree branches overhead. A soft, billowing cloud moved slowly across the sky, and Danny focused on pushing the negative out, the positive in. He was that cloud, floating to its destiny. He closed his eyes and was almost at peace, remembering the days of their youth when he, Katherine, Babur, and the others had trained through the nights and spent days reciting passages from Aldrick’s A Way of Light manifesto.

Even though he’d lost faith in Aldrick long ago, after the man’s death, he had to admit that bits of his teachings still lingered. He had been there longer than Katherine, after all. A couple of years longer, even.

Did he buy into the idea that they were sent by god to fend off “evil?” At first, he might have… but not after their first kill. Not after the first night he’d blacked out and woke up with the taste of iron in his mouth and blood splattered on his bare feet.

Aldrick had assured him that he’d done nothing wrong, that every life he’d taken had been for the cause. No matter how hard he tried to convince himself that was the truth, it didn’t sit right.

But he had to believe there was some reason for their curse, or blessing, or whatever the hell it was that transformed them to wolves. Especially so with Kat, who changed every night. She was different, and there had to be a reason for that.

He’d never told her, but this was the real reason he was out here, searching. He wanted clues, yes, but clues to understand their purpose, not necessarily for the cure she longed for.

Enough time had passed with him lying there like that, so he pushed himself up, glanced around to make sure he was safe, and then ran off toward the mountain village.

The jog through the woods was almost peaceful, if not for the nagging worry about Babur in the village. Part of him worried Kat would get caught as well, but another part of him knew she could handle herself. He’d seen her in action—he’d felt the pain of that action when they’d sparred together. Babur, however, seemed to need help in everything he did.

Even today, when Danny found the young man, he was sitting at a restaurant, out in the open like an idiot. Danny marched right in under the red and white striped awning, up to Babur’s table, and then took a bite of his sandwich. He was famished, and GOD, the combination of rye bread, sauerkraut, thousand island dressing, and pastrami that melted in his mouth was to die for. But there wasn’t time to enjoy the rest of it, but today.

“What’s happened?” Babur said, staring wide eyed as Danny pulled him up and toward the door. They ignored the curious glances from the other customers.

“Sir, you have to pay for that—” a waitress started, but a couple of twenties shut her up.

A quick glance around once they were outside, and Danny brushed off Babur’s coat, smoothing the points he’d ruffled in his haste.

“What the hell, Danny?” Babur said, confusion turning to worry.

“Now’s not a good time to be seen about,” Danny said.

“Come on, we’re in the middle of butt-crack nowhere. It’s such a big deal that I treat myself to a damn Reuben?”

“Your choice of sandwich means nothing when you’re dead,” Danny said. A thought hit him when he said that, a realization that the soldiers hadn’t seemed out for blood. “Or captured….”

“No….” Babur’s eyes glistened. “They have Katherine?”

“God, no. She’s supposed to find you, meet back at the room. Looks like I found you first.”

“Exactly,” Danny said. “And if it had been him, we’d likely be dead right now. Though, if they found us, I would be surprised if Hunter’s not far behind.”

A movement caught Danny’s eyes—a van with two men exiting, soldiers like the others. Danny pushed Babur farther down the alley, but before he could run, one of the soldiers made eye contact.

“Run!” he hissed at Babur. “Find Kat while I shake these clowns.”

FROM JUSTIN >>> Okay, if you read the sample chapters in the back of JUSTICE IS CALLING, this material here is new! It’s also the first time we go into Danny’s point of view (POV) – which is fun for me, because I ended up doing that throughout the book in an alternate POV style. I hadn’t done that since my Falls of Redemption books, so to return to it was nice (now I’m doing a lot of it in Justice is Calling books and follow-ons. So enjoy, have fun, and then let me know what you think!

As always, I want to promote a book. So today let’s go with T.S. Paul’s… 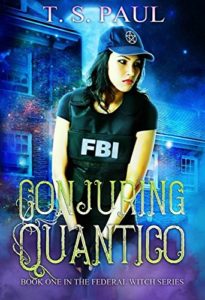 How do you cope with magic that goes its own way?

As a second year FBI academy witch, Agatha Blackmore has a certain reputation. After nearly blowing up the school, an untended mid-air incident involving the FBI Director, and declaring war with the US Marines, she has to wonder if she will even see graduation.

But when a rash of mysterious disappearances catches the attention of local authorities Agatha finds herself asked to lend a hand to the investigation. Determined to offer protection where it is needed the most, Agatha and her quirky roommate Cat along with her mini- unicorn familiar Fergus, attempt to unravel the mysteries of the four distinctly magical disappearances before time runs out.

Does Agatha have what it takes to be an agent? Or will everyone that crosses her end up eating chicken feed for the rest of their lives?

Conjuring Quantico is the first book in a brand new Urban Fantasy by T. S. Paul.
As a direct sequel to Born a Witch… Drafted by the FBI, T. S. Paul returns with the first book of the Federal Witch Series!

So there you have it! Pick up Conjuring Quantico or my fun werewolf novel HOUNDS OF GOD, each for $0.99!