The closer soldier lunged for Katherine, but Danny kicked him off as the other two rushed forward to join in the struggle. His flashlight clanked against the rocks, casting bursts of light through the room as it was jostled about during the scuffle.

Katherine hesitated, then ran and leaped for the rope. She pulled herself up as fast as she could, grateful for that aspect of Aldrick’s training, and was glad to see Danny following.

She was up and out when Danny yelped, barely hanging onto the rope as one of the soldiers pulled at his leg. Danny kicked and was free, but his hand came off the rope, and for a moment he was hanging in open air. Moving almost on instinct, Katherine reached out and caught him. With a great heave, she had him up and in the chamber, then slammed her boot hard into the face of a soldier about to climb up after them.

Danny was already pulling the rope free as he yelled, “Go!”

Throwing herself forward, she made for the small passage they’d crawled through to get here. A shout from behind told her Danny had met more trouble, and a quick glance showed two soldiers, one putting him in a chokehold, the other coming towards her.

Rage flared, fueling her with the strength needed to tackle the soldier and slam his head into one of the stone pillars. Without hesitation, she spun and kicked out the legs of the soldier holding Danny, freeing Danny to attack a third that had partially emerged from the well.

A bullet shattered the stone wall beside Katherine’s head. She turned to see a soldier holding a pistol up, aimed at her. He shook his head in a don’t do it way. Whether he had missed her on purpose, or by accident, it was a mistake.

Danny appeared behind him, knife at the man’s throat, and ended it. He picked up the pistol and aimed it at the one remaining soldier, motioning back to Katherine.

“I said go!” he said. With a clunk, he pistol-whipped the soldier, knocking him out cold, and then was following her into the passage.

They shimmied through the darkness and then sprinted up the stairs, adrenaline rushing.

A bright light welcomed them as they burst into the woods, even though it was near dusk. Out here felt peaceful compared to the cramped chaos they’d just escaped from, but they weren’t yet in the clear.

Danny held a finger to his mouth for silence, and the two ran at a crouch, eyes searching for signs of any more soldiers. The direction they had chosen led to a descent, allowing them to better stay out of sight. A river raged beside them, and Katherine was glad for it—whatever noise they might make would be drowned out.

They ducked around a point where the rapids were especially wild, to hide behind the roots of an overturned tree.

With a quick glance back, Danny finally relaxed and squatted next to the river, washing his hands of the blood.

“They found us,” he said as he looked her over for wounds. “So they might’ve found Babur.”

“He stays out of sight,” Katherine said. “And when they’re gone, we can continue searching, we—”

“Are you kidding me right now?” He ducked down into their hiding spot, drying his hands on his jeans. “Not with them on our trail.”

They stared at each other, a look of determination on his face that she wondered if she could push back against. She’d tried in the past, and almost always failed. Finally, she squatted down beside him and wrapped her arms around her knees.

“They couldn’t have tracked us,” she said. “Not without Hunter.”

Danny shook his head. “No, he works alone. This… it’s the pack.” He spat in disgust. “Gregor’d be the type to send others to do his dirty work.”

“Give them the curse?” Danny looked at her with wide, hopeless eyes. “I’ve wondered if he would do it… if he has it in him. Imagine, an army of werewolves.”

“Aldrick’s Hounds of God.” She shuddered at the thought.

“They were just normal soldiers, back there,” Danny said, sounding like he was trying to convince himself. “No bite marks or anything.”

He considered her, and his eyes betrayed his doubt. With a jolt, he turned, then stood straight, eyes moving to tree branches that shook not far off. The two moved deeper into the shadows, but Katherine turned her attention to the setting sun past the waterfall. If Gregor was raising an army of werewolves, searching for a cure would be the least of her worries. For now.

“No, we stick together.”

He pulled her in close enough to make her blush, but his attention was on the distant trees. A moment, and then he had turned to the river and the trees beyond. The sun glistened on the water before disappearing past the hills, leaving behind a sky streaked in blood-red clouds.

“Maybe you’re right,” Danny said, catching her off guard. “This ends now. Every dead end we find here tells me our answers might lie in Europe.”

“I thought you said those were pure myths,” she said. “Legends only the foolish give any credence to?”

“I did,” he admitted. “But here we’re out of options. And getting away from the pack would be a nice bonus.”

A nearby branch moved, and then a voice said, “Over here!”

Danny put a hand on her shoulder, the other against her cheek. “Head to the town, find Babur, and tell him to get ready. I’ll get the supplies to the car.”

And with that he was gone, skipping across the stones in the river until he reached the other side. A gunshot blasted through the air, and Danny slipped. For a moment, Katherine thought they’d gotten him, but he recovered and made it to the far side, disappearing into the trees.

She forced herself to breathe. He’d be okay. After a moment, she darted into the trees opposite the direction of the river. A glance back showed her that the soldiers were making their way into the river in pursuit of Danny.

FROM JUSTIN >>> Here’s chunk two! Thoughts? The book launches soon (less than two weeks), but I’ll make sure to put another snippet or two up here before then. I love writing this stuff, and am having a blast with Michael Anderle writing in a related (but different) world – it has vampires and werewolves and all that.

And on that note, I haven’t really promoted Death Becomes Her or the Kurtherian Gambit series (aside from writing in the world and promoting that – JUSTICE IS CALLING).

So, allow me to present… 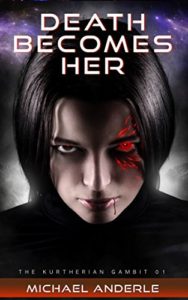 What you thought you knew about Vampires and Werewolves is wrong…so very, very, wrong.

A thousand years of effort to keep the UnknownWorld hidden is unraveling and the Patriarch is tired.  He needs to find someone to take over.

Unknown, untested and untried she sets out to accomplish the impossible while forging a new future.  One that no one knew was in danger.

And she does it with an attitude that will make you stand up and cheer!

They say a dress can make a women, but in this case, the dress is Death, and Death Becomes Her very well indeed.

Read the series one Amazon Reviewer MistyDawn says: “I’m surprised. I thought when I read the first book in this series, that it couldn’t get better…. I was wrong. I read almost continuously, and for the past year and a half, I haven’t read a series (or even one) book that I’ve loved as much. With such loyal characters, friendship, and badassery… just don’t wait to start reading these. So just, just wow.”

So there you have it! Pick up DEATH BECOMES HER or my fun werewolf novel HOUNDS OF GOD, each for $0.99!