Sandra glanced over her shoulder through a window, wondering if she’d really just seen Valerie running across a rooftop and then disappearing over its side.

No, she had to have imagined it.

“What is it?” Diego said, moving to the window beside her and gazing out. He shrugged and smiled back at her. “Looking to see shapes in the clouds? That one looks kind of like a snake, right?”

“Huh?” she glanced back out and saw what he was talking about. Though, if you considered the sunlight at its tip, she could almost see it as something more humorous, and laughed.

Then he saw it too, and rolled his eyes. “Let’s stick with snake.”

“Call them whatever you want,” she said. “That one’s pissing sunlight all over us.”

“You know, you’ve gotten weirder lately.” He made his move by sliding a little wooden play piece across the board, and smiled. “Usually I like it.”

“Just not when it involves clouds that look like man-parts?”

She looked down at the board before them. Diego had brought her here saying it was this great find, a dark bar high up in one of the few tall buildings remaining, where you could play vintage games like this one while sharing a beer. With a shrug, she took a sip of her beer and cringed.

She smiled, then moved one of the game pieces, still not exactly sure what she was doing.

“You didn’t really listen when I explained how this works, did you?” he asked.

“Sorry. I don’t know.” She bit her lip, feeling bad. She wanted to give him her full attention, she really did. “It’s Valerie. I’m worried about her. Maybe it’s nothing, but she’s been off with Jackson so much this last week, I feel like I’m losing her.”

“You do realize it’s only been a week though?” Diego took a long swig of his beer, with only a slight shudder. “Not the best stuff in the world,” he said, assessing it. “But considering they supposedly don’t even have beer in most of the remaining world, I think I can handle it. Oh, yeah, Valerie will be fine.”

“Sandra, this is Valerie we’re talking about here. Did you not see her in action? She’s taken down a badass vampire, her brother no less, and Commander Strake. She saved half the vampires in this city from being drained of their blood so that the CEOs could stay youthful and rich, and as far as I’m concerned, she’s a damn Goddess.”

“Is that so?” Sandra frowned.

“Oh, not like that.” He laughed and finished his beer. “Maybe that’s the wrong word. What is it the stories used to talk about? There were those old ones you still hear people mention, about mutants who fought for those who couldn’t fight for themselves. Superheroes, I think they called them? Yeah, that’s Valerie. She’s like a superhero.”

Sandra nodded, getting what he was saying. Of course, she wished the rest of the city saw it that way. Reports came in often of the word on the street, and it seemed pretty split between half of the city seeing her as a liberator and, maybe, even potential leader, while the other half thought of her as a monster. Ella was out there spreading her rumors about Valerie, along with some of the vampires that had come with Donovan and possibly even some of Strake’s Enforcers that had escaped the recent fights.

She glanced back at the beer, contemplating another sip. Did any of that matter right now, when she was supposed to be sitting here having a great time with Diego? She tried to tell herself no, that it didn’t.

Maybe if she had something other than beer to take the edge off, it’d be a different story.

“You know what I’d love?” she asked. “Aside from kicking your butt at this game that I totally don’t understand. Wine. Wine, and cheese, mostly.”

“Oh, and a good bakery!” Her stomach rumbled.

“I told you we should’ve gone out to eat with Valerie and Jackson,” he said. “You’re hungry for more than bar nuts. Come on, let’s go get you something good.”

“I haven’t noticed any, but we can see what we can find.”

He motioned to the bartender for the bill, and then chugged the rest of his beer, with a grimace.

“You don’t like it either, admit it.” She laughed. “See? If we had wine, like they have in France, maybe this city wouldn’t be so glum.”

“People in France are happier?” Diego gave her a doubtful look. “They’ve made barley whiskey in Spain, and that hasn’t helped much.”

“Good point.” She frowned, then smiled again. “But imagine how much less happy they’d be without it, right?”

The memory of a glass of wine with Valerie brought back the sweet taste in her mouth that night when they’d sat on the rooftop. That night when Valerie had kissed her. She found herself blushing, but when Diego asked where her thoughts were, she stood, pushed her shoulders back, and said, “It’s decided. Let’s do it.”

“Sure, great. But… what is it?” He looked at the board again, frowning. “And does this mean I win?”

She laughed and took the little piece that had a crown on top, then placed it on its side. “We both win. You at this silly game, me at life. Because I’m going to get the best bakery in the world going in this city, and I’m going to see to it that we have wine.”

“We have bread,” he said with a shrug. “Valerie told me about a place with these sausages served in bread.”

“The man selling them calls them hotdogs,” Sandra said with a dismissive laugh. “But if you call that bread, you’ve never had real bread. Come on.”

She pulled him up by the hand and led him out.

“What, we’re doing this now?” he asked, slapping a few coins on the counter on their way out. The heavyset man gave him a nod and blew smoke from a long pipe, leaving them with a sweet cherry scent on their way out.

“You ever found a better time to start something than now?”

“Where would we even begin?” he asked, following her up the stairs to the roof, where they’d been able to park the police pod she’d piloted over. The wind was blowing strong up here, clouds passing by now, bringing with them a wall of grey in the distance.

She slid her palm across the door so that it clicked and then slid open, up and out of the way. “I’ll figure it out. I always do, right?” A giggle escaped her as she slid into her seat.

“Wow, you’re worked up,” he said, going to the other side to climb in.

“Hell yes I am.” She looked at him, and then said, “You’re right though. What’s the rush?”

He looked at her with confusion, but when her hand was at his zipper and her lips pressed against his, she was pretty sure he got her meaning. It was like the excitement was boiling up in her. This wasn’t about defending the city or fighting for their lives, it was about having fun and enjoying themselves. So a little rooftop foreplay wouldn’t hurt in the meantime.

She undid his pants as he popped open her shirt, and then a voice sounded, “Sandra, it’s—oh God, seriously?”

Retracting her hand Sandra spun to see that the display showed Cammie’s face, scrunched up like she’d just eaten a rotten apple.

A quick glance at where Sandra guessed the camera was gave her a pretty good guess as to why Cammie was making that face, so she placed a hand over Diego’s crotch and said, “Might want to zip up.”

“Thank you,” Cammie said, glaring. “Not that I haven’t seen it before, but—”

“Is there a reason you’re calling?” Sandra interrupted, annoyed at the thought that Cammie and Diego had seen each other nude on more than one occasion. She got that it was all part of the way Weres operated—they generally would be naked when transforming, or tear their clothes and be mostly naked when they transformed back to their human forms. That didn’t mean she wasn’t allowed a little jealousy.

“It’s certainly not to catch you two about to tarnish a police pod’s purity,” Cammie said with a grin. “So… maybe find a hotel next time?”

“Laugh it up, bitch.” Sandra playfully flipped her off. “At least I’m getting some.”

Cammie laughed. “I could walk into any room here at Enforcer HQ and have ten cops, and another ten Weres or vamps tearing their clothes off with the snap of my fingers. Shit.”

“Ladies?” Diego said, finally presentable again, aside from the deep red of his cheeks. “The point?”

“Ah, yes.” Cammie’s expression became serious again. “Valerie just got here and called a meeting. Seems she’s got some big announcement and wants everyone there, pronto.”

“Maybe… give us fifteen?” Sandra said, with a hopeful glance Diego’s direction.

“Girl, do what you gotta do,” Cammie said with a scoff. “You know Valerie better than I do, but if it were me, I wouldn’t want to piss her off.”

“Fine, see you ASAP.” Sandra turned off the screen and then frowned at Diego.

“They don’t actually turn blue, do they?” she asked as she started up the pod.

“Damn, that’s cold. You’re going to turn me down like that and mock me in the same sentence?”

“It’s a genuine question.” She swiped her fingers across the controls so that the pod’s anti-gravity kicked in, and then glanced his way. “And think of it more as prolonging the pleasure. You know I’m good for it, and you know this girl’s going to get hers.”

He laughed and adjusted his pants. “I’ll be fine, but if this meeting lasts longer than five minutes, I might fake a seizure to get us out of there.”

“Deal,” she said with a laugh, and then aimed the pod for the tall building half-way across town, with its blue stripe that made it hard to miss.

FROM JUSTIN >>> I wanted to show both sides, so in snippet one you get the date with Valerie and Jackson, and here Sandra and Diego. Everyone’s trying to see if they can live normal lives. Can they? Someday, I certainly hope so! These two at least seem to have a better shot. Man, I’m rooting for all of them. I want them to win back the city,  inside and out, and so much more… but it won’t be super easy, will it? Maybe it will and it will just be a lot of fun along the way. Only one way to find out – stay tuned! 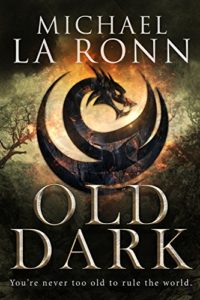 Old Dark is a viperous dragon lord who rules the world with an iron fist. For two hundred years he and his dragons have terrorized humans and elves, forcing them to pay tribute or die.

There’s a deadly conspiracy brewing. And if he doesn’t contain it, it will destroy him and everything he’s built.

But Dark was born to fight. There’s a reason the ancients called him Dark the Wicked…

Old Dark is the first book in the dark fantasy series The Last Dragon Lord. Readers who like the Age of Fire series and Smaug from the Lord of the Rings will enjoy this series.