UNEDITED (This is book 2, grab Hounds of God here. This contains SPOILERS if you haven’t read book 1)

Katherine sat at the table, chewing on cauliflower baked in curry powder, doing her best to ignore the grunts and smothered shouting of the two men downstairs. They’d questioned them and found that word had spread and there was a hunt for Katherine. That wasn’t anything new as far as she was concerned.

“We can’t let them live!” Matthew said, pacing across the living room of the house Mauro’s contact set them up with in North Berkeley. “Isn’t our point here to see justice delivered, to stop the evil of….” He stopped, looking at each of them, and then bit his lip.

“Evil of our kind, is that it?” Mauro said, hands behind his back. He stood tall, the ever regal man and werewolf. His eyes glowed yellow for a moment, and then he smiled. “While I appreciate the fervor in which you hunt, I must remind you that Katherine is right, we must offer help to those who will accept it.”

Matthew turned to her, nostrils flaring and eyes wide. “They were sent to kill you. You do realize this, right?”

“I see the value in keeping them alive,” she said, dropping her cauliflower for a sip of white wine. It was a tad dryer than she’d prefer, but it complimented the snack nicely.

“You see the value,” he laughed. “I’m sorry, I’m still not following the reasoning for us all listening to everything you say.”

“She was foretold,” Mauro said, looking at her like a proud father. She liked those looks, and the feeling of having a family again but all this talk of being destined for greatness and whatnot felt like a bit much.

“Yeah, I’m still not following that myself, really,” she said.

“We’ve heard all that bru-ha about the alignment of the stars,” Matthew said, and he looked to Triston for help, but he just shrugged. “But what makes you think that means anything.”

Mauro shook his head, smiling contentedly. “Ye of little faith. I studied the stars on the date I was bitten, and the date she was bitten—”

“But… didn’t you bite her?” Triston asked, now leaning forward.

“Yes, but only because I knew it was her… I sensed the aura about her.”

After a moment of silence, Matthew said, “You sir, are a nutjob.”

“Hey,” Katherine said, pointing at Matthew. “You’re one to talk? Did you help us kill Aldrick? Yes. Does that mean I trust you completely? Hell no. Does it mean I like you? Even less than I trust you.”

Matthew glared. “In the past… it’s true that I may have killed a werewolf or two who didn’t deserve it.”

Katherine stood, slamming her hands on the table. “You killed Babur. You nearly killed almost everyone in this room, at one point or another!”

“And he has apologized,” Mauro said, holding up his hands for peace. “His sins might not be forgotten, but we can do our best to forgive.”

“Can we not talk about sins?” Katherine said, lowering herself to the chair again. Her mind flashed to images of Aldrick pacing before her and the other kids of her youth, talking about how they were chosen by God to bring a stop to sinners of the world. Only problem with that was that Aldrick was the one to decide who the sinners were. “It brings back unwanted memories.”

“Yes, well…” Matthew stood and motioned to the door. “While we figure out how to work together for the good of humanity, we have those two down there that need to be dealt with. So do you have a plan?”

“Frankly, I’m done being hunted. It’s time I turned this around on them, and these two can lead us to them.”

She shook her head, then waited, listening. A moment later a crash of breaking glass sounded downstairs and she smiled.

“If they think they escaped on their own,” she said, and then leaped up, downed her wine, and said, “Who’s coming with me?”

Triston groaned. “You two couldn’t have let us all in the plan?”

Mauro stood, handing Triston his shoes and opening the door. “We could’ve, but this way it seemed more natural when you were questioning them. And we did learn some valuable information.” He turned to Matthew and said, “So, Hunter, will you be going with them?”

Katherine felt her joy vanish, and shot Mauro a glare.

“You can use his skills at tracking our kind,” Mauro said.

Matthew looked at the three of them, grunted, and headed for the door. “You couldn’t stop me if you tried.”

“Keep telling yourself that,” Katherine mumbled as she ran after him, Triston in the rear.

Matthew focused on the silver mist that formed when there had been werewolves nearby, the mist that only he could see. Rather, all of his kind, for all he knew. Aside from the old man in the mountains of Central Asia, somewhere in the area between Uzbekistan and Kyrgyzstan, he had become this half-monster that he was today.

He still hadn’t gotten used to the idea of working with werewolves, especially not Katherine, who he had spent so many years trying to kill. And he felt guilt over the ones who maybe shouldn’t have died, but it was war, humanity against the supernatural.

While he’d taken on the supernatural to fight, he still chose the side of humanity every time.

The mist led through the residential area and past a park, and then he spotted the two men darting past a house half way down the next block.

“Slow,” he said as he reached the corner, and held up a hand to make sure the other two knew to proceed with caution. He poked his head around and saw a man standing in the shadows, head bowed with a cowboy hat.

The stranger said something, and the two men turned around, eyes shining with a purple light. With each step they grew, hair sprouting from their bodies and claws and teeth growing sharp. Then the two were in full werewolf mode, charging right for them, and Katherine just barely managed to change before the first one attacked.

Katherine used her enhanced speed to side-step and throw one of them head-first into a nearby wall, then turned just in time to see the other one claw at Triston’s chest. He held up both arms to block, but that just meant he took he attack in the arms. Blood flew and Triston grunted in pain.

“They were just running from us,” Katherine said as she kicked that one back, then saw silver flash from the corner of her eye.

Matthew had his knee in the other werewolf’s back, silver blade to its throat.

“NO!” she said, but it was too late. He’d already pulled the blade across, slitting the beasts throat from ear to ear. Silver meant that wound wouldn’t be healing itself anytime soon.

She charged Matthew and pinned him to the wall, anger flaring in her enhanced arms.

“You don’t know if he was under his own control!” she shouted. A growl behind her showed the werewolf who still lived was circling Triston and then went for the pounce. But Triston wasn’t experienced enough yet to face these beasts, so Katherine released Matthew with a growl of frustration, and then turned to pull the wolf from Triston and throw him to the ground.

“The man!” Triston shouted, pointing up to the rooftop where his silhouette was still visible.

They ran forward, but the man was already up and onto the next rooftop, then, when he paused to look back and saw them pursuing, he reached out, moved his arms in a big circle, and then brought his hands together. A burst of light purple light shot out from his hands and when it faded, he was gone.

Matthew stumbled back. He stared, mouth open at the spot the man had just been, then turned to Katherine and Triston.

“Tell me you know what just happened,” he said.

Triston pursed his lips in thought then said, “This is all a dream, I hope?”

“This isn’t the time for jokes,” Katherine said, elbowing him in the side. “I certainly hope Mauro has some idea what that was, but it looked to me like that man just used magic.”

“This isn’t over!” Katherine said, pointing to the body of the other werewolf, but she dragged the other one up and pinned him to the gate. “Who was that? TALK?!”

He at first stared back defiantly, but then the purple light faded from his eyes, and he slumped down in her arms, conscious, but drained of energy.

Damn, this just got more complicated.

FROM JUSTIN >>> Chapter 2 gets us into the actual story, or new complications anyway, of what book 2 is all about. Unlike book 1, where it was all about Katherine on the run and being hunted, book 2 is about HER doing the hunting (and Matthew and Mauro’s journeys).

Oh, and guess what? The Audiobook for book 1 will be here in MARCH!  Get on my mailing list to ensure you don’t miss it (I might even have a couple ARC copies). 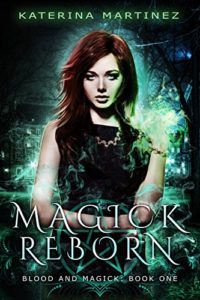 A powerful witch. A house of secrets. A deadly war.

When Madison traded up for a gorgeous Victorian house in the New Orleans French Quarter, she thought she was getting away from her toxic life. Sure, the house was old and run-down, but it was hers, and it was exactly the fresh start she wanted.

But then she meets Remy, a mysterious, sexy witch with power, class, and charm to spare, and everything changes.

Unknown to Madison, her arrival in New Orleans sets in motion a chain of events that throws everyone’s life into disarray—not just hers. Now, pushed into the middle of an ancient war between vampires and witches, she must unravel the secrets of the house she’s inhabiting before the forces awakened by her very presence rise from their centuries-old slumber, hungry and eager to feed on everything they can find.

Grab Book 1 and Book 2 on Amazon, if you don’t have them yet!