Katherine stumbled into the square of the small town of Bakerville. It wasn’t more than several streets and rows of houses, but it felt great to be back in relative civilization. The square was crowded with farmer’s market goers, and she bumped into a man with long blonde hair who eyed her suspiciously as he passed.

She had to remember that any one of these people could be with the soldiers that had attacked her. If her theory was correct, they could even be working with Gregor and the other werewolves. They had been running from them for far too long, but the last thing she wanted was a fight. Perhaps that was a silly hope, in light of recent circumstances. If he had sent those men, he wasn’t just following her anymore—he was declaring war.

A figure appeared behind her, too close for comfort, and she jumped. It was only Babur, one of the few who had come with her and Danny when they’d parted ways with the pack. He was nineteen now, and walked with a slight limp.

“Lose someone?” he asked out of the corner of his mouth, walking among the crowd.

“You scared the crap out of me,” she said, turning to see if anyone was paying attention to them. No one seemed to be.

“Last I saw, distracting a bunch of armed guys so I could get away,” she said.

“Yeah, me too.” He lowered his voice. “I didn’t have the chance to tell him, but… rumor has it another person went missing, blood trail the only clue.”

“Damnit.” She glanced around, then nodded toward the far end of the town. “Come on, keep moving. Danny was headed here?”

They walked briskly, in hopes of reuniting at the rendezvous point as quickly as possible so they could get out of there. Whatever had been in that hidden chamber, if anything, didn’t seem worth dying over.

“All this running when we should be fighting,” Babur said. “We—”

“How long do you think it’ll be before one of us slips? Something will point to us, even if it wasn’t our doing.”

Katherine held up a hand, but kept walking, eyes straight. “We’re going to Europe, to search out the Benandanti werewolves.”

“You mean Italy,” he said, eyes wide with confusion. “But you always said—”

“We’re getting desperate,” she said, and then added, “It’s worth a try.”

He pulled her around to face him. “We’re on a hopeless treasure hunt here.”

“You believe that,” she said, “then you should have gone with the pack nine years ago.”

He looked hurt, then resolute. “No, Kat. Not gone with them, stopped them. We all should’ve!”

She opened her mouth to respond when—BANG!

A red blossom of blood formed on Babur’s shirt, and he clutched at her jacket for support before falling to the ground, choking on his own blood.

Then she saw him—Hunter, the man who had attacked their house all those years ago. Even after killing the pack’s leader, Aldrick, he hunted the rest and had never given up. He always wore a weathered suit and carried a silver pistol that glimmered in the waning light.

“Like a family reunion,” he said, voice full of malice.

The crowd filled with screams as people ran for cover. Katherine used the chaos to her advantage, ducking behind a stall and sprinting down the sidewalk. A wooden beam splintered with a shot, and then she was gone, down a small alley.

She glanced back to see Hunter appear at the end of the alley, pistol aimed, but she kicked off the side wall and propelled herself through an open window with a crash. She rolled to stand up, pushed through a hanging bead curtain, and kicked open the door as it splintered with a gunshot. Ducking, she hurried down the narrow street.

Her foot splashed in the bloodied water from a butcher shop, and a moment later she was at an almost empty parking lot with a fountain in the middle. Tall evergreens surrounded the area, blocking out any sign of the sinking sun.

A long shadow fell across the pavement as Hunter entered from the alley.

After a moment’s hesitation, she charged. Hunter aimed. The bullet rang out with another bang, narrowly missing. As night took over, she transformed mid-run, not to full werewolf, but with wolf-like features as she often did on these nights—claws, yellow eyes, sharp teeth, and incredible strength.

The pistol rose again and a bullet hit her in the shoulder, throwing her back. She tried to stand, but collapsed. Silver. He had used silver, her one real weakness.

Hunter stood over her, smoking pistol aimed for the kill, and slowly her body transformed back to normal. He hesitated at the sight of her human form, then steeled himself and aimed for her heart.

“This part’s never easy,” he said, then squeezed the trigger.

A large shape appeared, tackling Hunter to the ground and knocking the pistol aside. Two soldiers held him down as the shape, who Katherine now knew to be Gregor, lifted her in his arms and ran.

Hunter roared in anger, far off now. Katherine felt herself being carried through the trees, all of it a blur, and then she was in the passenger seat of a truck, Gregor driving as they sped away. He held out a cloth and said, “Strong pressure. Do it.”

He glanced over at her with a worried frown.

“You were trying to kill me before,” she said. “Why rescue me now?”

Again, no answer. She took the cloth, and held it to the wound. If she could at least stop the bleeding, maybe she’d find a way to get the silver out of her body.

“It’s time you returned to the cause. Admit what you are.” Gregor swerved down a side street.

“And you… you can still go back for Danny.” She leaned against the door, hand ready. “Give up on Aldrick’s insane cause.”

“The cause is all we have in life,” Gregor said, voice rising in agitation. “Our only path to redemption!”

“Aldrick was a mad man!”

Gregor snarled and turned, hand raised, but she was ready. With a deep breath to muster courage, she threw the door open and slumped out of the moving truck.

The ground hit hard, but she rolled with it as best she could.

Not far ahead, the truck screeched to a halt while Katherine recovered. She broke into a staggering run and hurried down a hill into the trees, hoping the darkness would keep her concealed.

FROM JUSTIN >>> Moving forward — the book comes out this week (in 3 days! Dec 22) so I’m thinking this will be the last snippet I post. I hope you’re as excited as I am! We’ve now been introduced to Katherine and Danny, our protagonists, and seen a return of Gregor and the guy they call “Hunter.” He has a name, but you’ll learn that later. There’s a lot packed in here that you might not notice, and a lot of things that come into play later. Set them up and knock them down, right?

But now I must return to writing the sequel to Justice is Calling, titled Claimed by Honor!

As always, I want to promote a book. So today’s is Craig Martelle’s…

THE FREE TRADER OF WARREN DEEP 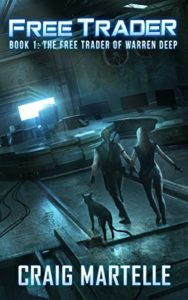 FREE Dec 19 and 20, and Craig is also doing some books in the Kur

In a recovering world, can one man and his bonded Hillcat save the people from themselves?

A Cat and his human minions fight to bring peace to humanity. Compared to Andre Norton, David Gemmell, and Larry Niven, the Free Trader series takes you to a colonized world across the galaxy where engineered animals help the people survive and become masters of the planet. After a devastating civil war, humanity and its creations rise again. The Free Trader finds himself at a crossroads – can he and his Cat prevent a repeat of past mistakes as they rebuild civilization?

In the spirit of Anne McCaffrey’s Dragonriders of Pern, Martelle builds a world where humans and intelligent animals interact in an ongoing fight against the enemies of civilization. Allow your imagination to run free through this book and you’ll see humanity at its best. 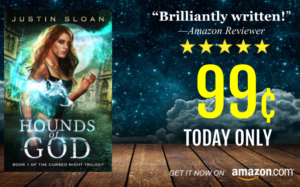