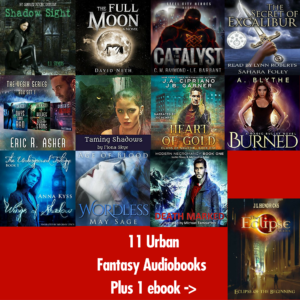 He wanted to bring his fiancée back from the dead. If he’s not careful, he’ll join her. Evans’s world was turned upside down when he lost his fiancée Senna in a tragic accident. He misses her so desperately that he’s resorted to the dark arts to bring her back.

Frank Altemus is a doctor with strange connections to the occult who promises to revive Senna from the afterlife in exchange for Rohan’s help on a “special” expedition. To Russia. To rob an ancient temple with a dangerous secret.

Rohan had no idea what he was truly signing up for. But if he wants Senna back, he’ll have to make a deadly sacrifice.

Death Marked is the first book in the urban fantasy Modern Necromancy series. It’s a fast-paced chase around the world that will keep you on the edge of your seat and fear the dead.

(Check it out on Audible)

Here’s some more information on the 11 urban fantasy audiobooks and a free ebook!

Check out the Audiobook Giveaway at AudiobookAccess.com, and go over to Audible to get DEATH MARKED. By the way, you can get it #FREE too with a free trial.