A loud chirping sound came through the open cockpit door, and Kalan had piloted enough ships to recognize it. That was the proximity alert.

The Pallicon who had been shouting orders smiled.
“That’s their friends, isn’t it?” the old Skulla next to Kalan asked.
Kalan didn’t have time to wonder how the old female recognized the sound of a proximity alert from forty feet away. Instead, he focused on the fact that she was right. Likely it was a large ship that would take the small transport shuttle aboard, effectively making it impossible to locate once they’d stripped it.
If the larger ship had arrived, they were lost. The thing that got Kalan out of his seat was the thought of these Pallicons’ bosses boarding the transport to find the hijackers beaten silly and Kalan’s smiling face looking down on them.
As he was getting out of his seat, the Pallicon in the cockpit called to the others, “Uh, we’ve got a problem. There’s not one ship outside, there’s two. And the other one seems to be attacking ours.”

Kalan didn’t consider himself much of a strategist when it came to fighting, but he did know this much: if your enemy’s looking the other way, it’s a good time to hit him.

As the Pallicons reacted to the mysterious appearance of another ship, Kalan turned to the old female next to him and nodded toward the oversized bag at her feet. “You wouldn’t happen to have a handgun in there, would you?”
“Sorry, I left it in my nightstand.”
The response was so deadpan that Kalan didn’t know if she was joking.
“Okay, guess I’ll do this the other way then.” He winked once more, then stalked down the aisle.
The guy closest to Kalan, the one whose job was almost certainly to watch the passengers on this end of the shuttle, was so distracted by the news from the cockpit that he didn’t notice Kalan coming. Kalan shook his head at the gross dereliction of duty as he approached. You had to be really bad at your job to miss a six-foot-five gray-skinned brute coming at you. Maybe the kid would learn a valuable lesson from this—assuming he survived.
Kalan knew he would have to move quickly once the fighting started. There were fifty-odd passengers aboard this shuttle, all cramped into a space designed to allow for maximum profit. If even one of those six well-armed Pallicons got spooked and started shooting wildly, things would go badly for the passengers very fast.
He eyed the hatch that led to the cargo hold. If he could get down there, any shots they fired at him would be aimed away from the passengers. That became his goal, but first he had to deal with this distracted hijacker.
Kalan waited until he’d almost reached him, then gently cleared his throat.
The hijacker turned just in time to see Kalan’s massive fist rushing toward his face. When it connected, he collapsed in a heap.
Pallicons were easy enough to take down if you caught them unaware—and if you could punch with the force of a small handgun—but Kalan knew he wouldn’t have that luxury with the other five. When their friend hit the ground, the four in the aisle were already turning toward him.
He reached down and grabbed the fallen man’s weapon, then sprinted toward the hatch to the cargo hold, arms pumping as he dashed past the rows of passengers. They stared at him with their tattooed faces, clearly unsure whether he was their savior or just another threat.
Kalan wasn’t so sure himself. If the hijackers got their Tralen-14s up and started shooting before he reached the cargo area, every passenger on the transport better hope the Pallicons’ marksmanship was better than their ability to secure a hostage situation. A single stray shot could blow a hole in any of the passengers.
When he reached the cargo hatch, he glanced back. The old Skulla female who’d been sitting next to him was watching wide-eyed, so he gave her one last wink before ducking through the doorframe and down the ladder to the hold below.
There wasn’t a lot of room to maneuver down there, which Kalan took as a positive. Close quarters meant they wouldn’t be able to surround him.
He wove through the crates and cases, and found an advantageous spot between two larger ones. It allowed him a bit of darkness to hide in, but it also didn’t pin him down too much.
The first head peeked into Kalan’s line of sight and Kalan immediately fired, dropping the Pallicon. Two down, four to go.
No second head appeared. Instead, Kalan heard the click of feet on the metal floor scurrying past his location.
This one was using his shape-changing ability, which was going to make things a bit more difficult.
Kalan thought, These Pallicon sonsabitches could be tricky.

He waited until he was sure the male had passed his hiding place, then he drew a deep breath and stepped into the aisle. He kept his handgun trained on the deck.

Sure enough, the Pallicon was waiting. He’d changed his shape to make four short legs grow underneath him so he could lay on his back as he walked.
He spotted Kalan a split second after Kalan spotted him. Thankfully for Kalan he was faster than the Pallicon, and he blasted a hole in his chest.
Kalan shook his head, almost feeling sorry for the poor bastard. When he’d reshaped himself into a monstrosity with four legs coming out of his back, he’d probably never figured he’d stay like that for eternity.
The communicator on the Pallicon’s belt flashed, and a voice came through. “Everything all right down there, Uunard?”
Kalan paused for a moment, then reminded himself he was probably going to die on this shuttle anyway. Might as well have a little fun first.
He grabbed the communicator and held it to his mouth. “Everything’s good. We could use a little help, though. We took him down, but he got me in the leg. Hurts like a son of a bitch. This gray guy’s as big as a yanecat.”
The reply was instantaneous, and it didn’t sound happy. “Suck it up, shape yourself a new leg, and get over here. We’ve got fifty passengers to corral and there’s a damn battle going on outside, so we don’t have time for you to cry into your soup.”
Kalan paused for another moment, then decided to give it one more try. “Okay, I get it. Could you at least toss me down a medkit? I’m bleeding all over the place.”

The reply sounded both disgusted and resigned. “Hang on.”

FROM JUSTIN >>> More of Kalan! Valerie will come back for snippet 5 (probably the last snippet). But we wanted to show you how Kalan handles himself 🙂 Fun, right?

Okay, one more time of self promotion with my other stuff, because – in case you missed it – I’m giving away some audiobooks!

GET A FREE AUDIOBOOK

If you want to win a copy (US or UK), head over to the Facebook Page, like it/ follow, and comment in the pinned post. That’s all 🙂 Alternatively, the book is only $0.99 (boxset – so first 3 books for that cheap!) and the audiobook is less than $8 if you have the ebook. Whispersync enables.
ENJOY!
ENTER HERE.
And if you are new to all this…
Have you read Craig Martelle’s THE BAD COMPANY books yet? They’re the other side of all this – same universe and all 🙂
THE BAD COMPANY 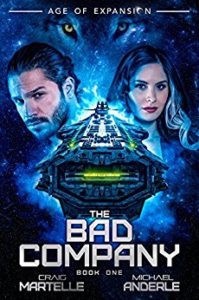 Space is a dangerous place, even for the wary, especially for the unprepared. The aliens have no idea.

Colonel Terry Henry Walton takes his warriors into battle, for a price, in this first installment of The Bad Company. He believes in the moral high ground and is happy getting paid for his role in securing it.

Set in the Kurtherian Gambit Universe, Terry, Char, and their people—humans, Werewolves, Weretigers, and Vampires—form the core of the Bad Company’s Direct Action Branch, a private conflict solution enterprise.

Join them as they fight their way across Tissikinnon Four where none of the warring parties were what they expected.