UNEDITED (Get the 3rd book in our Space Marine Time Travel series, already up on preorder)

Samantha crept like a thief through a forgotten munitions warehouse, one of eighteen outer buildings (including several launch control support buildings), that ringed Shiloh, the former Francis E. Warren Air Force base.

She moved forward, a battered AK-47 in her hands as she removed a fresh magazine from her tactical vest and gently placed it into the gun’s mag-well before rocking it rearward. The weapon’s ammunition latch clicked and Samantha nodded to herself. The magazine had been seated properly, so she flipped off the gun’s safety. She was surrounded by a dozen Syndicate soldiers who were outside, readying to spring an ambush. She’d been foolish enough to venture beyond the watch of her mother, Quinn, and a small group of aliens, a hit squad of some kind she reckoned, had found her.

It was only a matter of time before they kicked down the doors to the warehouse, but she wouldn’t go quietly. She had thirty little friends who’d be willing to greet them if they did, she thought, running her fingers down the edge of the gun’s magazine.

Her tiny frame pressed against a wall, Samantha sucked in a few breaths, then counted several Mississippis. She kept the stock of the AK-47 up near her shoulder and the muzzle depressed, locked and loaded, ready to surge forward through a faraway door and open up on the aliens.

Taking to her heels, Samantha darted across the expansive warehouse. There were sounds on the other side of the door and she kicked it open, bursting outside, expecting hell and bringing her gun up and around in a sweeping motion.

She fired a burst from her gun, the recoil thrumming her shoulder as she obliterated a Syndicate soldier, blasting his battle helmet to pieces. The other aliens wheeled on her, surprised that such a small creature could be so ferocious. Before the invaders knew what had happened, Samantha was upon them. She swiveled at the hips, the gun bouncing against her shoulder, blasting through the remaining rounds in an instant. The enemy fell before her, the ground stained with the red and yellow fluids that poured from their stricken bodies in great abundance.

Samantha lowered her gun to the sound of somebody clapping.

Blinking, she looked down to see that the Syndicate soldiers were actually a collection of old engines and electronic equipment that she’d set atop a pair of plastic saw-horses. And the Syndicate battle helmet was little more than an aged computer monitor. Looking over her shoulder, she spotted Quinn moving toward her.

Quinn took the still-smoking gun from Samantha and studied it. “So how long has this been a thing?”

Samantha traded a long look with her mother. “Ever since the beetles started trying to kill me.”

Quinn looked up from the gun. “The what?”

“It’s a nickname on account of the aliens looking like bugs and all. Some of my friends came up with it.”

Quinn popped out the spent magazine on the AK-47 and pocketed it. “You mean like the older guy back there?”

Samantha nodded. “Eli’s a righteous dude. He risked his life to help me. He was there when I needed him,” she continued, a little heat in her voice.

Quinn held up the gun and peered down over its barrel at the electronic parts that Samantha had just blown to bits. “Do you know what the hardest thing in the world is?”

“Taking down one of those mechanized drones has got to be right up at the top of the list,” Samantha replied.

Quinn lowered the gun and peered into Samantha’s pale blue eyes. “Being a parent takes the cake, kiddo, because you’ve only got one job to do, but it’s the most important one there is: keep your child safe at all costs. That’s it, and God help you if you do like I did…”

Quinn trailed off. She lowered the gun and knelt before her daughter. “I’m sorry, Sam. You took off before I could say anything in the silo, but I’m sorry for letting you down. I should never have left.”

Samantha took back the gun and waved a hand. “That was a long time ago, mom.”

“Four months! Besides, you’re twelve! You don’t have any long time agos!”

Samantha removed another magazine from her tactical vest and expertly slipped it into the receiver and readied the AK-47 to fire. “You don’t have to apologize. I mean, you did what you did to prepare me.”

“For what?” Quinn asked. “Years of therapy?”

“For the day when you’re no longer here.”

“Possibly a tad on the morbid side,” Samantha replied.

“I’m pretty sure it’s against the law to be morbid at your age.”

“The world we live in, mom,” Samantha said, with a shrug.

Quinn sighed. Mother and daughter stared at each other like strangers for a few awkward seconds. “So … are we cool or what?” Quinn asked.

Quinn smiled. “So what do we do now?”

“How about some mother-daughter stuff?”

Quinn beamed. “Awesome. Like what? Maybe go inside and play with some dolls or paint our nails and braid our hair?”

A playful smile tugged at the corners of Samantha’s mouth. “Mother. Seriously?”

Quinn returned the smile, but then her eyes narrowed. “So how ‘bout sending some lead down range with momster?”

Quinn stood over Samantha’s shoulder as she aimed at a cluster of bottles and rusted cans they’d salvaged from a base dumpster. Everything was lined up in ragged rows atop a clutch of wooden pallets. Samantha lowered the weapon and looked back at Quinn.

“Do you ever wish you had another kid, mom? Specifically, a boy?”

“How could you even ask that?”

“Because the world has basically ended and we’ve got to cram as much heavy conversation in as we can. I mean, we could die at any moment so I’m thinking we’ve got to live, like, all of my teenage years in the next few weeks at most.”

“So that’s your answer?”

“No, my answer is it’s a really weird thing to say to your mother. And that’s saying something coming from you.”

Samantha did a slow-burn.

“Yeah, and I’m the one saying the weird things …”

“Listen, young lady. What I meant is, have you ever wondered why, when you see images of war torn countries there are always wild dogs running around?”

“Not something I typically think about, no.”

“It’s because canines can get by on almost nothing. Women are a lot like that. Men, on the other hand, are definitely feline. They put up a front, acting like they don’t need people and that works for awhile, but eventually you find them lying behind the couch.”

“Nice visual. So in your little analogy there I’m what? A stray dog?”

“That’s right, pumpkin,” Quinn replied, squeezing Sam’s cheeks. “You’re my little pitbull. A scrapper. Somebody who can get by on very little. You’re everything I hoped you’d be. Now let’s talk about that rifle of yours, because I noticed before that you’ve got a serious problem with your muzzle climb when you go fully automatic. You lost your ability to stay on target.”

“So what’s a girl to do?” Samantha asked.

Quinn fished in the pockets of her cargo pants and removed a three-inch piece of metal, a threaded muzzle brake for the rifle that could be screwed on. She tossed it to Samantha. “Screw that onto the end of your weapon. It inhibits recoil and rise.”

Samantha screwed on the muzzle brake and took aim at the collection of electronic parts. The weapon looked immense in her tiny little hands. “I’m going hot, mom.”

Quinn stood back, watching her daughter fire into the debris, a number of disordered thoughts competing for her attention. For starters, what kind of mother would stand idly by watching their pre-teen daughter fire out a friggin’ assault rifle? It was simultaneously the most absurd thing she’d ever seen and the most natural. The world had been turned upside down after all, and the old rules and norms had been taken away with it. The country had been robbed of many of its adults and in their places had been left children.

She tried not to think about how many others were out there fighting like her Samantha. Just trying to stay alive. There was nothing wrong with Samantha. She was perfectly normal. The whole, wanting to be a pint-sized warrior was just a phase she was going through because of the invasion.

Once the enemy was defeated, things would return to the way they used to be. Quinn hoped. She kept thinking this thought over and over, as if repeating it, mantra-like, might make it so.

FROM JUSTIN >>> As I said at the top, the book’s already up for preorder! It comes out in just 2 weeks, so be ready. This is the book where a lot of the answers start coming out, and you find out what the big baddy is really up to.

Stay tuned for more! I’ll keep bringing the snippets, if you keep reading them. Of course, it is 4th of July weekend, so we’ll see. I might be too busy barbecuing hot dogs and making things go boom. 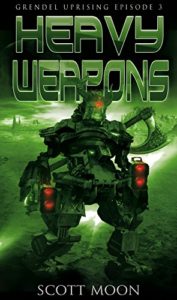 Hundreds of years have passed on Grendel since they last saw a modern army. That is about to change.

Three centuries ago, the planet of Grendel was purchased and terraformed into an imitation of 9th Century England and Scandinavia. Galactic civil wars, a cycle of financial recessions, and corporate raiding forced bankruptcy. The project, like many others, was abandoned.

Check out his book and all the other amazing space opera and space marine books available to you!