A base liaison officer led the Marines from the armory down a short set of stairs and through various anterooms until they hit a catwalk bolted onto the far side of the mountain. The catwalk extended behind an armored bulwark called “Block Thirteen,” which was notched with cubbies where Marines could sleep or shoot through firing holes.

Here and there were missile batteries and robotic chain-gun cannons pointed at the sky that could fire one thousand thirty-millimeter rounds per minute. Next to the weapons were phalanxes of anti-missile devices hooked to their own targeting systems—close-in cannons on swivel bases that fired chaff and tungsten penetrator rounds, designed to destroy any incoming alien missiles and artillery.

The Marines stopped and Hayden went down the line, assigning each a cubby. Quinn humped her gear down toward the end of Block Thirteen and dropped it in a cubby next to Renner’s.

Quinn stashed her rucksack at the back of the cubby and peered through a gun slot. Everything was green, the immense jungle below spreading out in every direction. She made sure the others weren’t looking, then withdrew her cellphone, a battered iPhone that had seen better days. She opened her photo album and started at the beginning, flipping through photos of her daughter from the moment she was born up to the present, her eighth birthday. Sammy aged right before her eyes and Quinn fought to suppress the tightness in her throat, the burning at the edges of her nose. She wanted badly to call her up, to check on her folks, but she knew that was forbidden. Intel had briefed the Marines and warned them that the use of cellular devices might be used by the enemy to track movements and positions. Knowing SouthCom like she did, bastards who cared about nothing more than winning, she figured they probably had cellphone suppression around the base anyway.

Music echoed, and Quinn set down her phone and peered around the side of the cubby. Renner was on his stomach, listening to some classical music while staring at a collection of religious figurines.

Renner looked back. “This here ain’t tunes. This is music.”

“Difference without a distinction,” she replied.

“Not to me. See, Quinn, I did three years in college ‘fore I joined up with you snake-eaters. I was a music major, and this is partially what I was immersed in.”

“Get the hell out,” she said, surprised.

“That’s a helluva tough transition, Renner. Building things up and now burning them down.”

He shook his head.

“Believe it or not there’s some overlap between the rhythm and meter of songs and poems and the sensitivity of initiation in explosions. That is especially so when yours truly tears it up.”

“What happened to the pen being mightier than the sword?”

“The pen is,” Renner said. “But it can’t compare to one of these,” he continued, smiling and holding up a forty-millimeter grenade from his launcher.

“Just keep it down, then, okay?” Quinn asked, smiling back.

Quinn shimmied back into her cubby and stared at the photos of her daughter again, waiting for her eyes to grow heavy. She drifted off against the clatter of the other Marines and the white noise from the base’s mighty air handlers, and then…

Back at the family’s farm in rural Ohio, where she was young and carefree, running through the woods. There was a path, little more than a depression on the ground, that she remembered so well she could traverse it blindfolded. She galloped over the path as it curled beside a small creek where she and her brothers used to corral tadpoles.

She stopped to catch her breath. Glancing down, she was surprised to see how skinny she was, her legs long and spindly. How old was she? Twelve? Thirteen?

The light spangled down through the canopy, and Quinn heard laughter. She turned to see figures racing toward a faraway field. She called out, but the figures didn’t stop. Giving chase, Quinn exited the woods to see three figures maneuvering toward a cornfield. She could tell by the contours of their heads that it was her brothers, Eric and Mike and John Junior. All of them together again. All of them alive. She yelled and they stopped but didn’t turn around.

Their attention was riveted on the field before them.

And the skies over the field.

The air was filled with shadowy objects.

One of Quinn’s brothers raised his hand and—

A fireball landed and smeared across the field. Then another and another, and in seconds an ocean of red was spreading across the corn like a tsunami.

The fire swept over her brothers. One of them, her older brother Eric, turned and stared at Quinn as the fire licked the flesh from his body. His husk-like corpse turned to charcoal as Quinn screamed and—

She rocketed back into real time, covered in sweat, glancing around. Quinn startled, her eyes wild. It was a nightmare, and she was back on Block Thirteen. Renner’s head was visible. He was peering around the edge of the cubby, a single finger to his lips.

Renner pointed up, but Quinn didn’t have to look.

She could sense it.

Something was wrong. Something was very fucking wrong. The hairs on her arms stood at attention and her teeth rattled.

Sweat roped Quinn’s forehead as she reached for her Fusion rifle. She crawled out of the cubby and saw everyone was looking up. She was terrified, yet comforted by the sight of her fellow Marines tense, waiting, weapons at the ready. There was reassurance in their numbers and training. If anyone stood a chance of repelling the invasion, it was them.

Quinn gathered her thoughts and followed their lines of sight up to the skies.

FROM JUSTIN >>> Here’s the third snippet of our new Space Marines / Time Travel series. We’ve got some amazing covers already lined up, and are working on the third book – exciting! Sleepless nights… but exciting.

We like to share other books that relate in these snippets, so how about this one by Michael-Scott Earle:

EYE OF THE TIGER 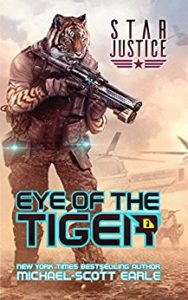 Imprisoned and subjected to brutal genetic experiments, space marine Adam has been changed into a perfect predator. A super soldier that is part man, part tiger, and all killing machine.

When his latest mission has an unexpected outcome, Adam finds himself free of his explosive control collar and honor bound to protect a mysterious woman. Now he is on an alien planet, and they are both being hunted by the most powerful mega corporation in the solar system. Their only escape lays at the helm of an experimental starship hidden beyond countless layers of military security.

All Adam has is his military training, sense of honor, and a beautiful woman who needs to drink blood to live.

It is time to let the tiger out.

For our new Space Marines series, stay up to date on www.Facebook.com/SyndicateWars or head over to Amazon to grab it now.