The fighter turned and Samantha admired the angle of the fighter’s chin, or the starkness of his blue eyes, almost like ice. She hadn’t thought about boys very much, but there was something different about this one. Unlike the other fighters, for instance, he was staring at the videos of the jackasses yet wasn’t braying like some barnyard animal. In fact, he seemed disgusted by the whole thing. Samantha admired that a lot.

“I’m not a soldier,” the guy replied without turning from the screen.

The fighter looked back at Samantha.

“I don’t mean to be a dick, but I’m supposed to tell you that it’s not going to be like this.”

“You saying things and me answering—”

The fighter turned back to the TV.

No response from the fighter.

“I mean it’s just common courtesy to give a name when you’re holding someone against their will,” Samantha said.

“If I tell you that, will you be quiet?”

“There’s a strong possibility,” she answered.

“It’s nothing … your name … it’s just … studies have shown that Daniel is a name associated with the least trustworthy people in society.”

“The people who conduct such studies.”

He stared at her for several seconds. “Y’know what I think? I think you’ve just got a serious case of Danimosity.”

Samantha smirked. “Do not.”

“You totally do,” Dan replied. “You’re a raving Dan-ti-semetic.”

Samantha nodded. “Good one.” She smiled, realizing she’d been right about this guy. Not only was he cute, but he was completely different than the other schlubs who’d been guarding her. The moment passed and Dan turned back to the TV.

“So what did you do?” Dan asked, eyes still locked on the TV. “I mean nobody told me, but there’s got to be a reason why you’re down here.”

“Oh, it was no biggie at all. I was just accosted by this supernatural being who showed me the end of the world and then taught me how to trigger the stored energy in inanimate objects.”

Dan nodded, evidently not believing a word of this. “Oh, is that all.”

“Exactly,” Samantha replied. “I mean, who hasn’t experienced that.”

A few seconds of silence stretched between them.

“How old are you, Samantha?”

“I thought we weren’t conversing.”

He smiled. She lied and said, “Almost sixteen. You?”

Coolness, she thought. An older guy.

“So where are you from?” she asked.

“What’s in Delaware?” she asked.

“A bridge and … there didn’t used to be any sales tax.”

Samantha nodded. “What’s the opposite of a bucket list?”

“Because based on what you just said, I’m putting Delaware on that.”

“You got any family there?” Samantha asked.

Dan pointed to his shotgun. “Nope. Don’t have any at all other than Mary Beth here.”

Dan looked at her, the levity vanishing from his face.

“I can’t let you go by the way,” he said. “I know your mom was like, a Marine and whatnot, but I can’t help you out if that’s what you’re thinking.”

“I’ve been given orders.”

Dan quirked an eyebrow. “They didn’t mention whether they were strict.”

“So there you go,” Samantha said, flashing the widest smile possible. “Orders aren’t meant to be followed unless they’re super strict.”

Samantha was sorry too. She spotted the lone cookie left by one of her prior guards on the floor and she was sorry about what might happen to Dan and all the others if she ever freed her hands. But her hands weren’t free, which meant that she was righteously screwed.

Her mind wandered to something she’d read in a resistance hideout in the weeks after the invasion. An article in a magazine about athletes who were able to control their immune response and autonomous nervous system primarily via a series of breathing exercises. The idea was through repeated deep, rhythmic inhales and exhales, followed by breath holding, a person could increase oxygen saturation in the muscles and body, thereby helping to focus their mind’s eye. The whole thing sounded a little loopy, but she figured she’d give it a whirl. She had time.

Leaning back, Samantha commenced inhaling and exhaling. She made sure to do it quietly, so as not to alert Dan. Then she held her breath and released it and repeated the exercise. She did this over and over and on the fifth try, something happened. It was as if she’d been rubbing two sticks together and suddenly she had a spark. Not only did her body warm, but some sensation welled up inside her that she’d only been aware of in the presence of Hadrian.

The feeling was profound and raw and somehow uncontrollable. For a moment she felt as if she had such a deep understanding of the universe that it might stretch her mind past what her body could tolerate. She’d heard of people who tripped on various drugs, and she assumed what she was experiencing had to be similar. She could see sounds with her eyes shut and hear smells and knew then that the moment of her purpose had arrived.

The ground, the room, even Dan fell away and Samantha found herself raptured up, suspended in the air, staring into a roiling void that was blacker than the bottom of a well at midnight. Her hands were still bound, but merely by focusing her thoughts was she able to birth a disturbance in the form of waves that fanned out, undulating out over the void and through the vast expanses of space and time, like a million dollops of creamer dropped in the galaxy’s biggest pot of coffee. And the power, whatever force was inside her, allowed her to influence the physical without physical interaction. She was a weapon, a human IED, an ambulatory trigger.

Her body grew warm and she found herself back in the room and her eyes hopped from the walls to Dan, to the cookie that began to thrum. Reacting to the sound of the cookie, Dan turned and time froze like a snapshot.

“GET DOWN!” Samantha screamed.

Dan did, covering his head as the cookie disintegrated with a cacophonous BOOM!

FROM JUSTIN >>> So this is skipping forward a BIT from our last snippet, but I wanted to do that for a couple reasons. One was that I’m working on a Sam spinoff, and this ‘magic’ or whatever you want to call it plays into that. The second reason is just because I think Sam’s so damn cool. There are the Hadrian parts in book 3 that just knocked my socks off (George wrote a lot of that, so I got to read first draft stuff, and it was fun!)

This week I wanted to make sure I’ve shared Glynn Stewart’s books – because they are scifi with magic too. I might have shared them before, but that’s fine 🙂

So here is Glynn Stewart’s … 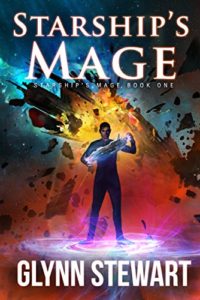 In a galaxy tied together by the magic of the elite Jump Mages, Damien Montgomery graduates into their numbers—only to discover that without connections, he can’t find a ship and is stuck in the Sherwood system.

Pirates attacked David White’s jump freighter, leaving him with a dead Mage and a damaged ship—stuck in Sherwood, where a grieving father has blacklisted him from hiring a replacement Jump Mage.

When their desperate needs meet, Damien Montgomery is drawn into a conflict with the most powerful criminal organization in the galaxy—and to the attention of the Mage-King of Mars himself!