Xan marched down through the main hallway in the bottom of the silo. She was accompanied by a bear of a man in grime-splotched clothing, a resistance fighter from Colorado in his forties named Quarrels, who’d lost most of his right hand during a Syndicate bombing run in the days after the initial invasion. Quarrels had just come in from a long-range patrol and had some rather startling intelligence that Xan wanted to share with Comerford.

They found Comerford in the silo’s command center, seated in a chair, a faraway look in his eye as he peered at war footage on a bank of monitors. When he glanced up to see this raggedy man accompanying Xan, his eyes narrowed.

“This him?” Comerford asked.

“Joe Quarrels,” Xan replied with a nod and a smile. “Fresh in from the world.”

“I heard you were out in the field for the better part of three weeks.”

“More like four, sir.” Quarrels smiled, revealing that most of his teeth were missing. He smacked his thigh and dust flew into the air.

Quarrels extended his hand and the men shook. Comerford glanced down at Quarrels hand, eyes going wide to see that he was missing all of the digits on his right hand except for his middle finger.

“You came at the wrong time, Mister Quarrels,” Comerford said, sighing as he returned to his chair. “We got us a little predicament here.”

“So I hear. Xan said something about a fifth column nosing around.” Quarrels traded a glance with Xan. “Somebody who maybe ain’t what they appear to be.”

“We don’t know that yet,” Comerford replied. “We’ve yet to do a proper investigation.”

Quarrels sucked on his teeth. “That don’t surprise me in the least, given all the activity out in the country.” He gestured at Comerford. “May I show you something, sir?”

Comerford nodded and Xan moved over to lower the lights in the room. Quarrels snapped a tiny nano-projection device that resembled an oldschool Fitbit exercise tracker around his wrist. He powered the device up, opening several windows and subwindows on the device’s minute screen. With a tap on a subwindow, it beamed a pool of yellowish light into the air. One more subwindow caused forms to dance in the light.

The images were of varying quality and shot from different distances, but they all showed one thing:  a vast contingent of Syndicate personnel and equipment engaged in some kind of preternaturally large engineering operation near a river that crashed down through an impressive, rust-colored set of canyonlands. Quarrels was able to manipulate the images by wiping and cross-cutting the images with the swipe of a finger. He sifted through the material as if fast-forwarding scenes in a movie. Comerford and Xan watched as the engineering work progressed at a mindblowing pace.

Comerford looked from the images to Quarrels. “The hell are we watching here?”

“The bastards are building a base,” Quarrels said. A huge, goddamn base.”

Quarrels pointed to various scenes, including images of a gigantic metal device that looked like a drillbit on steroids. The drone was positioned over the desert floor, dangling at the end of metal ropes that were tethered to four enormous, airborne Syndicate drones that resembled construction cranes.

“We estimated that thing at six-hundred feet long with a weight that’s likely ten times that of the Statute of Liberty,” Quarrels said. “It’s a piece of engineering divinity.”

Comerford squinted. “What is it?”

“The world’s largest mechanical worm,” Quarrels said, pointing to the end, the mouth of the drillbit as it was lowered by the four airborne drones. “It’s got a cutterhead that’s fifty feet across and studded with what scraper bits and cutting wheels.”

Comerford watched the drill disappear down into the ground, burrowing at a rapid clip. Then, an immense metallic screw curled through the middle of the drill, the action spewing the muck dug from the hole back into the air until the sky was black.

“That thing can carve a tunnel that’s thirty feet across in minutes,” Quarrels whispered. “We watched it dig out several thousand cubic yards of muck every minute, boring down hundreds of feet into the ground.”

“For what purpose?” Comerford asked, looking up.

Quarrels smiled and pointed a final time. Comerford watched as water began pouring out of the hole, spewing up, covering everything in sight.

Quarrels’s finger traced the outline of the spreading water. “They tapped into the Snake River in order to flood the canyonlands.”

The images changed to show a fleet of drones soaring through the air. The machines had wings on either side from which dangled titanic, curved slabs of what appeared to be concrete and metal. The drones hovered over a section of canyon that had once housed the river, the water having been diverted by the hole dug by the large drill. The airborne drones maintained a position not unlike a tiltrotor military aircraft readying to land, and then rocketed up only to drop down again, pistoning the curved slabs into the ground. Once the slabs were stacked in place, smaller drones piloted by Syndicate personnel buzzed over and moved down the stack, using what looked like epoxy, rivets and spotwelding to create one seamless wall that easily stood one-hundred feet in the air.

“They’re building a wall,” Comerford said, his mouth adroop, awestruck by what he was watching.

“To hold the water back,” Xan said. “They flooded the desert and then damned it up again over the horizon. They’ve created their own mini-ocean.”

More images appeared in the air. A vast, newly formed body of water dotted with what looked like islets that were being rapidly expanded. Comerford watched Syndicate workers and drones dredging up sand and aggregate, sucking up material through hoses and tubes that was then dumped onto the islets, expanding their surfaces. Next came machines that resembled colossal dump trucks that laid down additional layers of material, Quarrels flipping through the images, allowing Comerford to watch, in seconds, the islet evolve into a towering Syndicate base made of stone and metal and alien alloys.

Quarrels spread the fingers on his good hand and the POV pulled back to reveal that there were a dozen such bases in the new “ocean” the aliens had built after damming up the Snake River. Several of the bases appeared like spires, tall and thin, sticking out of the water like needles. The others were larger, and Comerford did a double take when he saw that they were suspended in the air, kept aloft by massive plumes of water that were sucked from the “ocean” and blasted through a series of jets that wreathed the bottom of the bases.

“Holy Mother of God,” Comerford whispered to himself.

“It’s like what the Chinese did in the South China Sea with them reefs back in the day,” Quarrels said, the images disappearing.

She moved over and flipped the lights back on and the trio sat in silence for several seconds.

“Some of our spies said they’re running the place with modular fusion reactors,” Quarrels said.

“I don’t know what that is,” Comerford replied.

“Basically, they got the power of the sun trapped inside a nuclear reactor. They’re using plasma to power to base. For what purpose, I do not know.”

Comerford massaged his face. It was clear that he was having difficulty grasping the enormity of everything.

“What the hell am I supposed to do about all this?” he finally asked.

Quarrels smiled warmly. “I have heard that you were once a military man, before the world turned over.”

“If I say the name General Edward Braddock, does that mean anything to you?” Quarrels asked.

“I seem to remember the name, but can’t place it.”

“Best leader of men the British Army had in the years before the American Revolution. The old gent was a straight-up kicker of ass and taker of names. You know what he did? He decided to march an army of over eleven-hundred men up through the Allegheny Mountains.”

“Pride goeth before a fucking fall,” Quarrels said with a chuckle. “French and Indians were there waiting. They were outnumbered and outgunned, but they kicked the bitter piss out of him. Killed two-thirds of Braddock’s men and nearly three-quarters of his officers, along with Braddock himself. Do you know why that battle was important?”

“I’m sure there are a number of reasons,” Comerford replied.

“It showed that the greatest army in the world could be defeated by a bunch of guerrillas. It gave people hope that the British could be beaten.”

“We need that,” Xan said, looking up. “We need to strike the alien base. Send in a team to blow up the reactors and send a message to those fuckers.”

“Christ, Alexandra,” Comerford said, shaking his head. “We do that and we’ve got a bigger bullseye on our back.”

“I’m not scared of the scuds.”

Comerford grimaced. “We got children down here, several families…”

“So send them away then. The time for running and hiding is over, Abe.” Xan looked over to Quarrels, who nodded, before she added, “It’s time to take the fight to the invaders.”

Comerford ran a hand through his hair. His brow furrowed and finally he shook his head. “How the hell would you even get close enough to that place to strike a blow? They’ve got guards, drones, machines that watch day and night, and—”

“But we’ve got something they might want,” Xan said, cutting Comerford off.

There was a strained look on Comerford’s face. He couldn’t meet their eyes as he asked, “And what might that be?”

FROM JUSTIN >>> In this second snippet (not in order) from Syndicate Wars 4, we have a glimpse of what the Syndicate is up to, an more reason to hate Xan (as if you needed more of that! haha). The fourth book will be the best and longest yet, so be prepared!

In the meantime, want another sweet book to read? If you like SW, you might enjoy Isaac Hooke’s… 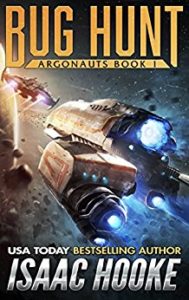 Starting an interstellar security consulting company was supposed to be easy.

Rade got his ex-military teammates together and they pooled their savings to buy a ship and six mechs. The Argonauts were born.

But it wasn’t easy.

Ruthless bankers breathing down their necks, vengeful warlords promising to pursue them across the galaxy, and now a mysterious new client who wants Rade and his Argonauts to escort her to a frontier planet.

Problem is, the new client won’t reveal her cargo. It’s probably something illegal.

They arrive to find the frontier colony strangely deserted. When the shit hits the fan and the Argonauts face a possible alien infestation, it’s time to pull out the big guns. Because if there’s one thing Rade and his Argonauts really love, it’s a good bug hunt.

And this one looks to be the hunt of a lifetime.