As far back as Giovanni could remember, the monsters had come for him in the blue light of pre-dawn. There was the one he was convinced lived between floors in his house, for instance, the slithering monstrosity with ten, whippet-thin arms that lurked in the ductwork, emerging in the wee hours to harvest the “crusties” that lay at the corner of his eyes. And then there was the spider-like thing that hid in the piping, reeking of sewage, crafty enough to crawl up out of the sink after dark to nibble on his toenails.

Giovanni hadn’t thought about these things for years, but as he sat in the back of a tactical vehicle, watching the gruesome Syndicate drones fall from the sky, it all came rushing back to him with the suddenness of a punch to the face.

Luke and Calee were at his side, the three of them gazing up into the early-morning sky, heavy with hovering gliders. They could see the mechanized killing machines dropping out of the open ports on the vessels’ bellies like demons jettisoned from some terrible birth canal, riding metal leaders called ‘ratlines’ to the ground, ready to conduct a sweep of the northern part of the city of Las Vegas.

“Same thing’s happening at most other major cities,” Luke said. “We’ve got reports coming in that major offensive operations are over. They’re not really attacking in full force anymore.”

Giovanni took this in. “Surgical strikes?”

“More like snatch and grab operations,” Calee replied. “They come down, raise some hell, and suck up anyone over the age of eighteen. Lately, they’ve been targeting some of our operators. LRP units coming in from the field.”

“Which is why we need to reach Detwyler and the others before they do,” Giovanni said. He leaned back, worried that the Syndicate might reach a long-range patrol, a group of resistance fighters led by a warrior named Detwyler. They’d communicated with Detwyler two days before, and he’d said they’d taken casualties out in the heartland. They’d gathered intelligence, confronted the enemy, and made contact with other resistance groups spread out across the Midwest. Giovanni was shocked when Detwyler mentioned meeting up with a young girl, one who’d helped them ambush several Syndicate patrols. The girl had gone off with another group, but Giovanni was eager to talk with Detwyler to determine whether the girl might be Quinn’s daughter.

Luke tapped Giovanni on the shoulder. “So, how come we’re risking our necks to talk up some grunt who’s come in from the wilderness?”

Giovanni looked over at Luke. “We’re risking our asses because he’s likely got some information on the daughter of a friend, that’s why.”

Giovanni watched ribbons of black smoke billow in the distance.

“HEAD EAST!” Giovanni shouted as the driver of the tac vehicle swerved down a side street, rumbling across a pockmarked ribbon of cement.

He looked to the back of the tac vehicle, the machine’s extended bed packed to the gills with heavily-armed resistance fighters.

Giovanni’s head jerked to the west where he watched the drones continue to descend to Earth, dozens of them, fanning out, heading toward their position.

“We’re gonna make it,” Luke said, reaching out a hand to Giovani. “Relax, okay? We’re platinum. We are going to do this, and then we’ll—”

A missile detonated out in front of the tac vehicle, a blast that carved a divot ten feet deep in the road. The driver sawed the wheel, and the tac vehicle careened sideways, smashing into several parked cars, yet miraculously avoiding flipping over.

The vehicle came to a stop, and Giovanni thought back to a time during one of the last wars, the first of two conflicts in Yemen, when he and his team had been hit by an IED, their vehicle disabled on the lip of a desert verge. Some of the men had foolishly stayed in the bed of the truck and had been gunned down by snipers, which is why he turned and screamed, “Out! Everyone out.”

The resistance fighters spilled out of the tac vehicle and took up positions around a one-story ranch house. There was a smattering of debris in the front yard, several additional cars, and hillocks of material that had likely been stripped from the house during the post-invasion looting. All of it could serve as a crude bulwark. The fighters watched the Syndicate drones grinding down the streets toward them followed by a small delegation of Syndicate soldiers that were bringing up the rear.

Several of the smaller drones buzzed through the air, circling overhead, presumably beaming back information for the larger machines, the ones that looked like bull elephants with tank turrets grafted onto their upper bodies.

Giovanni closed his eyes and listened to the pneumatic hiss of the machines’ leg joints and the thumping sound the drones made when they expelled green gas from rear vents, the end product of what he believed was the source of their power.

While the Syndicate had spared most of downtown Las Vegas, it was not unusual for them to operate in the far-flung suburbs. Giovanni had seen intelligence footage of Syndicate teams sweeping entire neighborhoods, searching for people and information. Some of the people, mainly the able-bodied, would be taken away and sucked up into space, the others were gunned down or blown up where they huddled in their houses. Anger gripped him, and he squinted at the street where the drones, perhaps fifteen in all, had turned their attention to the stricken tactical vehicle.

“Hold your fire,” he whispered to the others while checking the firing bolt on his fusion rifle.

“Don’t fire until you see the reds of their eyes,” Calee said, sharing a look with him, smiling darkly.

Luke handed out ballistic grenades like a school teacher dispensing cupcakes as Giovanni consulted with a bull-necked resistance fighter who held a ruggedized hand-tablet. The tablet, a palm-sized device, showed a map of the area, including their current position and the location of the safe house. The drones were positioned directly between them and their objective.

“I say those things maneuver best on solid ground.”

Luke nodded. “What have you got in mind?”

“How ‘bout we level the playing field?”

Giovanni motioned to the other fighters, and they huddled. He explained the necessity of planting some of the grenades in strategic positions in the lawn at the front of the house. The other fighters backtracked to the side of the structure as Giovanni and Luke wedged the grenades at various locations and jogged back. The fighters took cover as the grenades exploded, trenching the ground, making it uneven, and drawing the attention of the drones.

The machines rumbled forward and then hesitated near the holes and the attendant debris. While the things could certainly take flight for short periods of time, the area was so chocked with trash and the other material that there was likely not enough space for them to land. Giovanni counted on the drones being tentative, at least for a few seconds. That’s all he needed. Just enough time for him and the others to spring the trap.

Giovanni sighted his rifle, focusing on the first of two bubble-tops that crowned the turret of the first drone. By every measure, the bubble-top was the weakest spot on the drone, an area where a well-placed shot could inflict a significant blow to the drone’s operational capacity. A Syndicate operator was visible inside, consulting computer equipment while piloting the machine. Whether the operator was a machine, an alien, or some horrible combination of the two mattered little. He was the enemy and hellbent on killing the resistance fighters, so Giovanni sucked in a breath and fired a shot.

The first sabot from his gun split the bubble-top, and the second bisected the operator, blowing him in half in a spray of yellow and green liquid. The other resistance fighters witnessed this and cheered, then letting loose with their weapons.

Without its primary operator, the lead drone groaned and bucked and wildly loosed fire from its two front-mounted chain guns. Balls of plasma shrieked past Giovanni and the others as Luke grabbed a ballistic grenade and hurled it like a fastball.

The grenade air-burst near the drone’s ankle joints, shredding the hydraulic conduits. The machine toppled backward onto three other advancing drones, and writhed like a toppled turtle.

Another grenade landed in the middle of the beached drone, obliterating it in a fireball that provided cover for the resistance fighters who charged en masse across the lawn.

Giovanni was with them, firing on the run, watching return fire from the drones’ laser past him like tracer rounds.

Slammed into the fighter, catapulting his body forty feet into the air and through the front windows of the one-story ranch.

FROM JUSTIN >>> I had to jump forward to Giovanni here, because I missed this guy! More action, of course – hope you love action, because this book is FULL of it. The book comes out in less than two weeks, so stay tuned for at least one more snippet!

Today’s share is risky, because… it’s the #2 in our category right now! Make sure you buy our book before buying this one, haha. 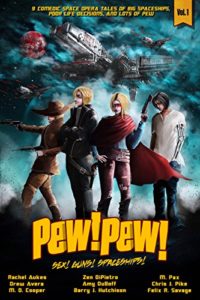 Delta-Team – by M. D. Cooper
In 8913, a crack military unit was court-martialed and sent to a maximum security prison for stealing the general’s cookie recipes. Colonel Ramsey and his team promptly escaped and fled the core systems.

Today they serve as soldiers of fortune, or whatever else will make them a buck.

If you have a problem, if no one else can help, and if you can find, then maybe, you can hire the Delta Team.

So there you go, our third snippet of our second SYNDICATE WARS book! Don’t forget to get book 1 if you haven’t yet, and book 2 is up for preorder. Thanks!

(We also have a series page now on Amazon and a Facebook page.) 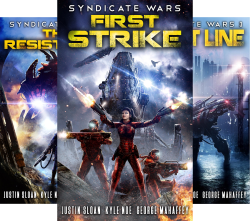