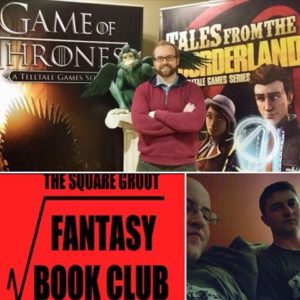 I’m pretty excited to share that The Square Groot podcast reviewed my book, Land of Gods. Was it perfect? No, they didn’t just blow smoke up my butt, so that was nice. Haha. But overall it was positive and I look forward to their thoughts about book two (but really book three, because it is freaken amazing).

So yeah, if you want to check out the review, listen here:

In the meantime, some “owning.”

I’ll own that the book isn’t super dense, and the language simplistic at times. Heck yes I’ll own that – it was one of my goals in writing this series. I wanted to write something that even my 16 year old brother (who never reads) could pick up and enjoy, without getting bogged down by the fancy language/ world building/ info dumps.

I can see how some of the more well-versed fantasy authors might want more ‘fantasy-ish’ language. Eh.

Basically I wanted to write my version of Game of Thrones or Way of Kings, but easily digestible. Let me know if I accomplished it (whether you prefer one style or the other).

What else… Oh, Narcel being not as intriguing as the other characters.

Yeah, that’s something some books have issues with. It’s the question of “How much do you want your reader to BE the main POV character.” In the case of Narcel, 100%. So, you run the risk of making that character less interesting than the others (I’ve heard this discussion around Harry Potter vs. Ron and Hermione too, so if I can be in the same company as them, I’ll own it).

Hope that provides more context – I’m happy to discuss anything else you might be curious about.

Go listen to the podcast!

Check out the podcast, it’s amazing. They also interviewed me about my writing and working on Game of Thrones at Telltale, not long ago – on a different episode.

I really enjoyed this review and look forward to their other reviews (I hope they do PT Hylton’s Zane Halloway series next).

The book: LAND OF GODS