This is the first snippet from my new story in SHIFTING DIMENSIONS – only $0.99 and on KU!

Kaylin braced her hands against the walls of the tiny escape pod, struggling to choke back her claustrophobia. The pod hurtled forward, heading straight for the swirling smoke of the time-travel portal.

Then it was gone. The Syndicate ship, the escape pod, the portal–all of it. In its place was a black abyss that swallowed all light and matter. Weightlessness consumed her body, but somehow, she could still sense motion tugging her through the nothingness.

The first time she’d experienced this, she’d thought for sure she was dead. But now she knew better–she wasn’t travelling to an afterlife; she was travelling through time. Although there was no way of knowing where or when she’d end up this time. In their desperate escape from the doomed ship, no one had been able to program in a destination.

The weightlessness ended as abruptly as it’d started. Light blinded her, and gravity yanked at her stomach. The abyss vanished, and she materialized back in reality, sitting on a bed in the corner of a room.

No. Not just any room. It was her room, in her old apartment, back at her childhood home in Cleveland. Kaylin hardly dared to breathe, terrified that the slightest movement would send her wheeling back into the abyss of the time-travel portal. She moved only her eyes as she took in her surroundings.

Her tiny bedroom looked exactly the same as it had the last time she’d slept there, before the invasion began and the bombing incinerated her home. She still had the same frayed blue quilt on her bed, the same grey paint on her walls, the same battered dresser in the corner.

Disbelief filled her as she swept her gaze over the colorful posters covering the ceiling above her bed. London, Paris, Berlin, Tokyo, Seoul–all the cities she’d spent her childhood dreaming of visiting. And all of them crushed to ruins by the Syndicate army.

Or maybe not. If the device had taken her to an alternate time frame, maybe none of that had happened yet.

Which left the question: what time had she landed in?

She glanced at the window. The blinds were closed, but hazy grey light crept through the slats, telling of a foggy morning outside. That didn’t help much, considering most mornings were foggy in this city.

Below the window, her beat-up laptop perched on her nightstand, its fan whining as it struggled to keep the old computer cool. A local news website was popped up on the screen, and the entire front page was covered in emergency warnings and pictures of Syndicate ships hovering in the sky over nearby cities.

A chill flooded her veins. This was it. This was the day the invasion began in Cleveland.

She vividly remembered reading that headline and scrambling to run the four miles to St. Matthew’s, hoping to get her hands on an extra pack of survival materials. At the time, the authorities had said the Syndicate attack on Cleveland wouldn’t begin for at least another two days. They had been accurate in predicting the times of the attacks that had happened the day before, when the invasion first began in other cities. So Kaylin had assumed they’d be able to accurately predict when the invasion would reach Cleveland, and she’d thought it was safe to leave her little brother alone in the apartment.

She’d been wrong. Just as she’d left the church, Syndicate ships had descended from the clouds, dropping deployment pods into the streets. Kaylin had sprinted back toward her home, but it had been too late. The Syndicate had already dropped bombs on the freeway intersection right next to her apartment, obliterating everything within half a mile.

The shockwave had thrown her to the ground, and she’d lain there helplessly in the street, screaming as she watched her apartment complex tumble to the ground. As its ruins were engulfed in flames, a fire had also ignited within her: she wanted to fight. The Syndicate had stolen her brother from her, the most precious thing she had. And she wasn’t going to rest until she got revenge.

She’d been fighting for the Resistance ever since, making it her mission to slaughter as many of the Syndicate invaders as possible.

But none of that had happened yet, at least not in this timeline. Ever since the day she’d lost her brother, she’d desperately wished for a chance to re-do the events of the invasion. And this was it. This was the miracle she’d dreamed of.

She finally had a chance to save her brother’s life.

FROM JUSTIN >>> Here’s another snippet from the new anthology! Short and sweet, because you can get it online now, but I wanted to give you a taste of the direction this story is going. Pretty good stuff! We’re super thrilled to have L.O. Addison and the others in this anthology.

We’ve gotten some great feedback so far, and love hearing your takeaways! Here’s a review that nails it:

5 out of 5 starsfun, interesting and in the case of some creepy

What an ingenious and creative way to introduce readers to these authors and the spin off series that are to follow! While yes, they are spin off’s from Syndicate Wars, they can stand alone. Although… you are missing out on some really goods books if you have not read SW. Each short story here follows one main character after a time shift. They are fast, fun, interesting and in the case of some creepy. But don’t let that put you off. You will be intrigued – I promise. I look forward to reading more.

I hope that tells you what it is 🙂  Also, I always like to promote other books in this section of snippets, so today wanted to share one by Richard Fox (DragonCon award winner):
THE IBARRA SANCTION 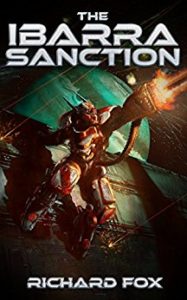 Once, the Ibarras saved Earth and all of humanity from utter destruction. Now they are fugitives and traitors hunted by the Terran Union’s mightiest warriors.

After fleeing with a stolen armada, the Ibarra family have finally emerged from hiding and are scouring the galaxy for an ancient alien legacy, destroying any who get in their way.

For armor soldier Roland Shaw, the call to put down the Ibarra mutiny is a bitter task as he and the Iron Dragoons come face to face with the Ibarras in order to discover if they are truly their friends or their most deadly foe.