Rhona followed closely behind her brother, pulling her dress up over her ankles to avoid tripping as they descended the stairs. This was foolish, she knew, but she had to admit that her curiosity was piqued. On top of that, they had the warlock locked up, so what could go wrong?

The stairs led to the servants’ hallways, many of whom were sticking their heads out in curiosity at the sound of fighting above.

“Return to your rooms,” Alastar commanded, storming past.

Rhona did her best to keep up, but her dress made it hard to move swiftly, and more, the servants weren’t listening to Alastar’s command. Instead, they crowded into the hall with questions about what was happening, hindering their progress.

At the end of the hall, stairways led to the dungeon—a result of transforming this former basement from an old Church ruins into the dungeon.

Rhona turned and shouted, “We’re under attack! Get to your rooms and lock up if you want to live!”

That got their attention, and soon the hallway was empty.

Alastar looked back at her and laughed. “Couldn’t you have done that before we walked through them all?”

They descended the stairs as an explosion of flames burst from the far end of the dungeons below, casting a yellow glow their way.

Alastar held a hand up for her to keep back, then crept forward and ducked down to look around. With a nod, he stepped forward and was gone from sight. Whatever awaited them couldn’t be as bad as the terror of sitting here in this dark stairwell, heart thumping in anticipation.

She took the last couple of steps as one, nearly tripping over her dress, only to find Alastar crouching, sword held at the ready. Dungeon cells surrounded them, several with warlocks inside. A guard stood at the ready, club in hand. He wore boiled leather over his tunic, and was certainly no paladin. Another blast came their way, but it was from one of the stairwells that led down—the fight had yet to meet them.

The scream that followed sent a horrible chill up Rhona’s spine, and she found she was hugging herself.

Alastar clutched the sword, adjusting his grip and glancing at the cell that held the warlock he had captured. The warlock clutched the bars, eyes wide with excitement.

“Is all this for you?” he shouted.

The warlock gave him a wicked smile and said, “I damn well hope so.”

“What do you know of the Sword of Light?”

“Enough to know it won’t matter if we’re all dead.”

Alastar didn’t like that answer, apparently, because he stomped over to the cell and kicked at the bars. “You pull on your flames, and I’ll have your head.”

He motioned to the guard. “Key, now. I’m taking him out the back way. They must not get their hands on this one.”

“If they break in here, and by the sounds of it, they will at any minute,” Alastar pointed out, “all that stands between them and this man is you. But if I take him to the paladin’s quarters, we can pray to the Saint for our protection, and there won’t be a chance of them leaving here with him.”

“Hide behind bars, pretend you’re a prisoner. They won’t touch you.”

The guard contemplated this, then nodded and began fumbling with the keys to get the cell open.

Another blast sounded from the passage above, and Rhona shouted, “Hurry!”

Finally, she elbowed the guy aside, took the keys, and fitted them in the lock. They turned with a click, and the door opened, leaving her face to face with the dark warlock. A dull glow from Alastar’s sword, left over from the High Paladin’s blessing, was the only light. It cast an eerie glow on the warlock’s face.

She gulped, anticipating flames to burst forth from his hands at any moment, but it never happened.

Instead, he shouted, “Down here!”

“You maggot,” Alastar said, grabbing him by the hair and pulling him from the cell.

A burst of light filled the dungeon and a clatter sounded. They all turned to see a torch roll across the ground, still lit.

“Oh… shite,” the warlock said, and then he tried to run, but Alastar’s grip was too strong. “Get behind cover!”

A moment’s hesitation nearly cost them their lives, but then Rhona ran, pulling at her brother, snapping him out of it. With the guard, they all ducked into the cell as a woman in thick robes, her face covered, appeared at the base of the stairs with arms raised. Flames erupted from the torch, like a thousand fiery serpents leaping for their prey. A great sizzle sounded as they hit the walls, which Rhona and the rest were hiding behind, and then the lady was in the dungeon.

“Come out, maggot,” she said with a raspy, humored voice. “It’s time to join the winning team.”

Rhona glanced over at the warlock at that, and wasn’t surprised to see confusion on his face. He didn’t know this lady, and that was a sign of something, though she didn’t know what, yet.

Then she noticed the glow of Alastar’s sword, falling across the dungeon floor as the flames died out.

“There you are,” the lady said, and a moment later she was standing before them, on the other side of the bars. Her teeth were pointed, and she wore white paint that seemed to make her face glow, and her eyes had a fiery spark to them.

She raised her hands, palms out, and the smile grew.

FROM JUSTIN >>> As I mentioned, I skipped a tiny bit (a bit more from the last chapter, and a section from the Warlock’s POV. You’ll see them when you read the book 🙂  But here’s the arrival of the baddies, and you get to meet one of them. More arrive shortly!

Guess what? We’re on schedule to submit the book to Amazon! It should be available 5/20/2017 at the latest, I would think. Fingers crossed! Come on Amazon!

Also, you know how I always talk about author PT Hylton? Well, he released his first snippet in his Age of Magic book! (If you don’t know, this book of mine is an Age of Magic book – check out the cool logo on the cover image above).

Check out his snippet HERE, for his new book STORM RAIDERS. 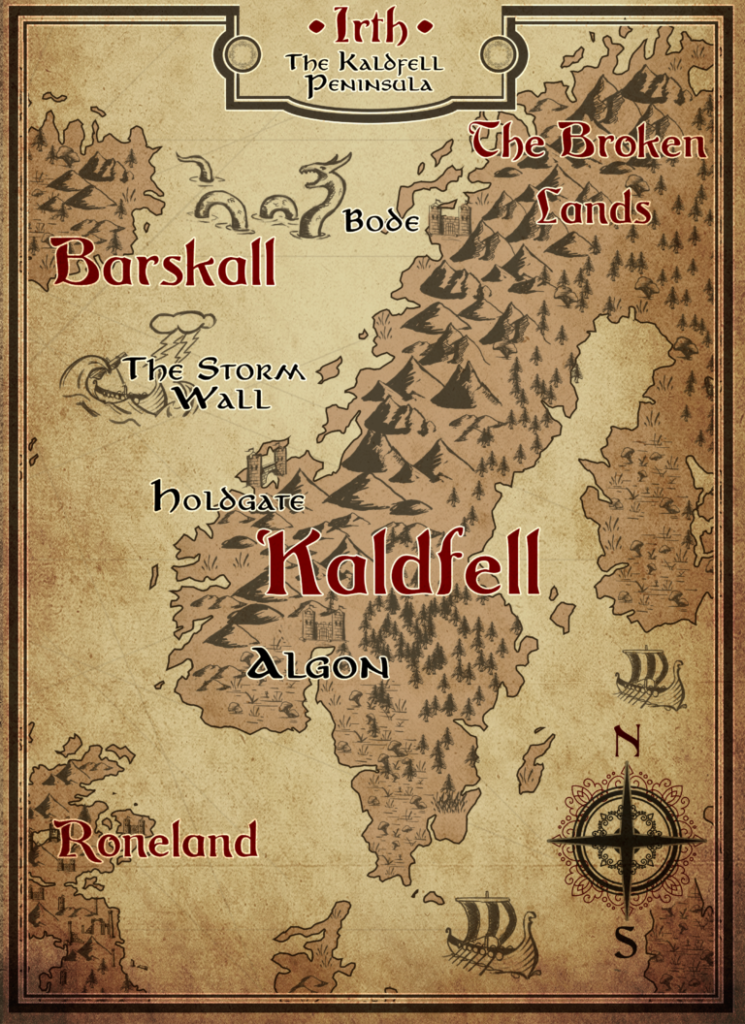