“My records indicate we’ll not find them in, or even around, the cities. Here, from what I’m told, the people scattered, avoiding the cities and turmoil, holding their own in the mountains on the one hand, or creating great fortresses in the lowlands.”

“There,” Volney said, eyes glazing over for a moment as he mentally reached out, sensing life. He pointed to a cluster of trees on a far hill. “Not more than a couple dozen, though.”

“The clans are like that here.” Larick pulled out his parchment, checking his notes. “Yes, small groups, though we’ll probably find some larger ones as well, and it seems they’ve come together in the lowlands.”

“Rudimentary at best, I’d imagine. No one was able to give me more than that, but since they’ve had no one to teach them until now, I can only assume it’s a wild practice. Boys and girls discovering hints of magic, but unable to control it.”

“Or even if they can control it, such powers may be unlike anything we’ve ever seen.”

“Again, rudimentary at most.”

Volney motioned to their right. The wind at the edge of a cliff was looking up at them, oddly enough. It shifted, then danced as it materialized further into the form of a small, translucent woman. She moved with the wind, circling them, and then came to a stop a foot from Larick’s face, tilting her head to look at him.

“No, allow me.” Larick put away his parchment and closed his eyes, focusing his inner eye, searching for the source of this spell. Oddly, he found only one presence nearby, that of a child. With a gentle soothing, he opened his eyes to see the wind spirit return to the air, flowing half-way down the hill. There, waiting, was a pair of wide, surprised eyes. A small girl, wearing nothing but brown rags.

Larick mentally projected himself forward, so that he appeared in front of her, though in fact he hadn’t moved at all, and he said, “There’s nothing to be afraid of, child. Not from us.”

With a giggle, the young girl ran off, soon disappearing into a clump of trees below.

“Rudimentary?” Volney laughed. “I have a feeling we’ll learn as much as we will teach, brother.”

Larick nodded in agreement. He had to admit, he hadn’t been expecting this. They were in for one hell of an adventure.

FROM JUSTIN >>> So… I’m going to wait and say more next time when it’s not the prologue. This is to set up the world, and these characters WILL appear in the story, but aren’t the main characters. I hope it intrigues you at least a bit! Let me know 🙂   And next time (tomorrow maybe?) we’ll get to meet the characters who are on the cover! YAY!

There you have it! But I always like to spread the word about books I like and though I’ve done this one before, it 100% relates, so I have to make sure you all know about the Rise of Magic books, which start with RESTRICTION, by CM Raymond, Le Barbant, and Michael Anderle. 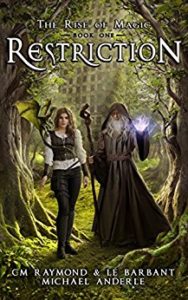 She didn’t mean to use magic

She didn’t even know she HAD magic

She just wanted to save her brother, who was dying in her arms.

Accused of using illegal magic, and sentenced to a cruel death at the hands of the city’s guards, Hannah has no choice but to trust in the aid of a strange old man who wields unimaginable power.

The Founder has returned to correct the wrongs of unjust. But to do that, he needs Hannah, a young woman from the city slums. She has a key to unlocking a power even greater than his own–if she can only learn to trust herself and the magic flowing within her blood.

Restriction is a fantasy set in the far future, where magic and monsters ravage the land of Irth and only the strong survive.

Set on the foundation laid by the Kurtherian Gambit Series, Restriction tells an entirely new story in the Age of Magic–and of the heroes and villains who battle for control of its destiny.

Read now and Enter the Age of Magic…

Get the Rise of Magic books 🙂