Not quite sure she had seen what she thought she had, she inched forward on her elbows and peeked around the rock again.

Sure enough, in the center of the valley was a group of remnant. Their clothes hung in rags from their scarred and beaten bodies. Their eyes glowed red in a way that was especially creepy in the early morning light.

One of them stood over the dead body of another as the others took sides. At first she couldn’t see why, but then she caught sight of a clansman tied up, beaten and bloody, on the ground nearby. He looked to be unconscious, and from the snippets of conversation she could overhear, they were fighting over him.

For a long moment she laid there wondering how she could save the man without being caught. It was humorous, she thought, how saving him wasn’t even a doubt in her mind. There was no way she’d let him be their prisoner or dinner or whatever they had in mind.

One of the remnant grunted and turned, and it seemed like they had reached a truce.

Not if she could help it.

An idea hit her and she wanted to laugh, but decided to first see if it would work. Focusing her energy, she moved her left hand in a way that helped her concentrate on the one who had his back turned, and then made a slight spark hit the sensitive part of his neck just under the left ear.

He spun on the other remnant, furious, and knocked him to the ground with a punch.

“Couldn’t be done with it?” the first remnant shouted as he kicked the other.

The second growled in pain at the kick, then rose and pushed him back. “Wasn’t me, you piece of rat shite. Wasn’t me!”

“Ah, slag off,” the second remnant said, turning back to the clansman. “Agreement sticks.”

Now Kia wasn’t going to play around. She aimed again, then sent a quick scorcher to ignite the second remnant’s crotch. Nothing big, just enough to flare up and cause pain before dying off.

He roared and spun, then drew his hatchet and ran for the first.

Now I can laugh, Kia thought, as more of the remnant moved in to join the fight.

But she couldn’t linger. The man had started to move, noticing what was happening, and she needed to get him out of there before he was trampled or they turned their blood lust on him.

In a mad dash she ran down the side of the valley, trying to stay low in case wandering eyes spotted her. She slid the last bit, darted over to the man, and helped him to stand.

A loud roar came from behind her and she saw that one of the remnant had spotted her.

“Can you run?” she asked the clansman as she sent a small flame to the ropes between his legs—just enough to burn through them. A sensation like being kicked in the head hit her, but she knew it was just from using her magic in such a focused way.

“Go!” she shouted, pointing back the way she had come. He frowned and took off to the northeast instead.

She cursed, sent a fireball at the remnant charging her, and then ran after the man.

“I have a whole camp up the hill!” she told him, able to catch up in spite of the exhaustion of magic use, likely because his state from having been tied up.

“And there’re more of us this way,” he replied, pointing to a group of trees along the valley. “Just past there it opens up into a plain, and that was where we were to regroup.”

Kia cursed. The other remnant had noticed the fireball and were now recovered from their infighting and starting to give chase instead. They blocked the way she had come, so her choices were to turn back and face them all or keep running.

“How’d you get yourself caught, anyway?” she demanded, running alongside him.

“What’re you doing charging into a group of remnant to save someone you don’t know?”

“I know you,” she said, realizing it from way he frowned. “I mean, not exactly, but we were at this village with water mages, a lady named—”

“Leila,” he finished, glancing over and recognition showed on his face. “You’re Donnon’s girl?”

“That explains a lot.” He glanced back and cursed. “We need to get close to water so I can get them off our trail.”

“Casting a spell on them would damn well help right now.”

She gave him a raised eyebrow, turned and cut the air with her hand—the effect was a wall of flames that rose up and hit the closest remnant full-on.

“I-I’d heard rumors,” he managed, nearly stopping as he stared at her in amazement.

“Keep moving!” she replied, pulling him along. “I thought we’d done a good job of keeping it secret, but I think we’re beyond caring about that shite.”

They reached the trees, dodged through them, and soon came out the other side. They emerged to find the level ground covered in short brown grass.

“You can do it too, you know,” she said, glancing back to see forms of the remnant moving through the trees. “Cast magic without the source. Without the element nearby, I mean.”

“The wind mages I travel with, sure. The wind is everywhere.” He glanced at her skeptically. “But me, a water mage? No, I can’t.”

“Not with an attitude like that,” she replied, and then debated her next move. “Listen, I’m not about to run into a camp of strange men and leave my people to wonder what happened to me.”

She scoffed. “Don’t forget I’m the one who saved you. You want to stop me? Give it a try.”

His eyes took on a doubtful look, and she nodded. “I thought so. Listen, we have a large group up there, I’ll rouse them and bring them this way. You do what you can to hold the remnant off.”

A man had spotted already them from the far side of the plain and was shouting as he ran over. More men appeared behind him.

“Thank you,” the man said, and started toward them.

“I know. The name’s Farrel, when you find us, you’ll want to speak with Laird Lokane.”

Kia knew that name well enough, and it almost made her halt in her steps. She quickly recovered and was practically flying up the hill, then realized one of the men below had cast a wind spell that was giving her the needed boost. Farrel was at his side saying something and pointing her way.

Another had reached those two, and was now sending debris with the other mage’s gusts of wind at the pursuing remnant.

When Kia reached the top of the hill she waved her thanks and saw them take off for their encampment, wherever that was. The remnant started to emerge from the tree line.

Another blast of magic wouldn’t kill her, she figured, and slowing down the remnant could help her new friend.

Ducking down to be out of sight, she threw a spark into the brown grass, which a moment later had ignited into a blaze, catching dead trees and scattered twigs alight. It wouldn’t be enough to stop them, as they could quickly stomp it out, but it would be enough of a delay that it could mean the difference between Lokane’s fighters being caught unawares or not.

With that she darted back to her encampment, ready to sound the alarm.

FROM JUSTIN >>> The second snippet is here on the same day that PT Hylton’s 3rd book launches! I’m sure you’re all as excited as I am. His books are amazing. Today’s a slow writing day because first the kids have a dentist visit, then so do I. Followed by lunch with my wife in SF, then a podcast. Jeesh! Good thing I finished Shades of Glory, right? Now working on finishing Reclaiming Honor 8 🙂  Finishing a series is always a weird feeling – joy, sorrow, etc, but the good news is that Valerie will continue on, just in a new series.

As for Rhona, Alastar, and all the others (KIA!), they only have one more book after this, but then… who knows? If you all love them, there’s no reason to not have either more of their books or have them show up in other Age of Magic books. Of course, that wouldn’t work if we just killed them off – aren’t you glad I’m not George RR Martin? Lol.

And for today’s recommendation… I started reading this book below, and love it. Very Glynn Stewart and, I think… me 🙂 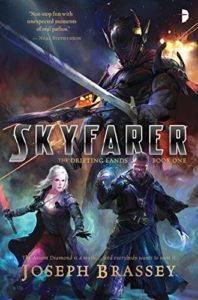 The Axiom Diamond is a mythical relic, with the power to show its bearer any truth they desire. Men have sought for it across many continents for centuries, but in vain. When trainee sorceress Aimee de Laurent’s first ever portal-casting goes awry, she and her mentor are thrown into the race to find the gem, on the skyship Elysium. Opposing them are the infamous magic-wielding knights of the Eternal Order and their ruthless commander, Lord Azrael, who will destroy everything in their path…

Grab it on Amazon.