Rhona sat at the edge of the water, staring west and wondering if they could ever truly be prepared to set foot on an island rumored to be covered in remnant and ghosts.

It was bad enough that she’d be leaving Donnon and Kia behind, given that the remnant were starting to cause trouble even here. Then there was the invading force Master Irdin had told them about: a dark, secret society that meant to conquer these lands, as best they could figure. Oh, and they were powerful sorcerers, too.

At least the land would be in good hands, since Donnon and his daughter had the ability to control fire.

None of that would matter, though, if she and her brother could retrieve the Sword of Light from Sair Talam and return to unite the lands. For too long they had been at war, the paladins and the clans. For too long the King of Gulanri had left them to their own devices.

Now all of that would come to an end, if only they could achieve their goal quickly.

“So eager to be gone?” Donnon asked, stepping up behind her.

She imagined him wrapping his arms around her, holding her and staring out at the setting sun with his lips gently pressed against her neck. The look in his eyes told her he had a similar idea, but they had agreed not to tempt themselves; not when she had to leave and he had to stay to unite the clans in the land’s defense.

Neither wanted to be so emotionally attached that they would put their missions at risk, so she simply nodded with a forced smile while he licked his lips nervously.

“When we return, everything will be different,” she finally said.

“Aye, of course.” He nodded to the city walls. “Kia has fed the horses, and there is food in your packs.”

“Thank you.” She got lost in his eyes for a moment, then turned, blushing. “If the sorcerers return while we’re gone—”

“We’ll hold them off. I’ve sent riders to the nearest clans with messages for them and to pass on to the outlying clans. If nothing else, they’ll be ready. Best case scenario, we’ll hold our own with the paladins and stand united, even if we’re in hiding when the sorcerers arrive.”

“Those damned paladins,” Rhona replied, shaking her head in frustration. “If they’d just listen to reason…”

“A sentiment we’ve expressed for many years.”

“Well…” Rhona sighed at the thought of the warrior order her brother had once belonged to; that she too, in some ways, had once belonged to. Taland and his wicked tongue—and she meant that in more ways than one—had spread his poison widely within the Order of Rodrick. As far as she was concerned, they were as much an enemy as the remnant at this point.

“Leila was asking about that brother of yours. He seems to have run off.”

Rhona chuckled. “Alastar is like a child who has never been to a bakery before. Suddenly he has access to cakes and tarts whenever he wants them, and can’t get enough.”

“I’d say Estair is definitely more tart than cake, but yeah, I get your meaning.” Donnon flushed, and his eyes darted across her body before he looked away.

She hadn’t meant the words to make him feel awkward, but if they were looking for Alastar, it was true that he was probably rolling in the clover near the river, likely somewhere hidden by the trees.

Donnon nodded, his eyes on the ground. “I’ll check on the provisions one last time.”

He turned to go, but Rhona took him by the hand. Their fingers lingered, just barely touching each other, but with a heat that screamed for them to do so much more.

“Be careful,” she said at last.

“You too.” He paused, then lifted her hand and kissed the back of it before walking back to the village.

Her heart was about to tear itself out of her chest, so she focused on those damned paladins and the sorcerers, and what a mess they had caused. Taland’s annoying, cocky smile flashed across her mind and she wanted to reach out and slap him, or better yet, unleash her nails across his face and scar his perfect skin.

She found herself breathing heavily, and she realized that a purple light had begun to glow around her fingertips, causing shadows to move through the grass toward her.

Happy thoughts, she told herself, trying to push the darkness away. If it weren’t for all of this, she never would have met Donnon, right? Or his daughter, Kia, whom she had only just gotten to know and already loved like a little sister, or maybe a daughter, though Rhona wasn’t nearly old enough for that.

She remembered the moment they defeated the witch and sent Master Irdin into retreat, the moment she knew Kia was safe, and flushed with joy.

When she looked again, the purple light was gone and the shadows had retreated. Shaking her head to clear it, she stood up and headed toward the trees to find Alastar, hoping she wouldn’t see anything that would scar her for life.

FROM JUSTIN >>> Wow, these snippets are coming at you fast, huh? I just did four days in a row of BORN INTO FLAMES (Reclaiming Honor Book 5), and it just released. Now I’m getting you the snippets for SHADES OF DARK (The Hidden Magic Chronicles Book 2) because it’s coming out very soon as well. This writing journey is full of excitement and never lets us rest, but who would want to? It’s too much fun!

I’ve already started receiving great feedback on this one – people are enjoying it more than book 1, it seems. Not that they didn’t like book 1, but this one has a lot more of my humor and all that in it, because book 1 had to carry the burden of setting up the story and characters. Now they’re established, so let’s get to the sex jokes! Haha. I might be getting older, but my mind still apparently resides in a similar space as it did when I was fifteen — or maybe it’s the characters? Yeah, I’ll blame the characters, because we all know they have a life of their own.

Stay tuned, because the next snippet goes into Alastar’s POV, and we have some fun bad guy POV stuff in this book too. OOOH! And it starts connecting more with PT Hylton’s book, STORM RAIDERS. His second book is coming out very soon too, so yeah, stay tuned for that.

In the meantime, let’s get you a book recommendation. How about JT Williams’ — 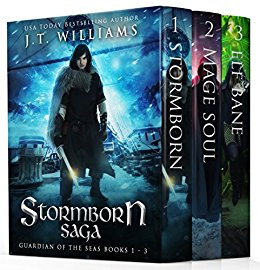 Orphaned at birth. Chosen by the Ascended. Destined for Darkness.

Valrin was born of the sea. Raised by his adopted elven aunt on a small fishing island he knows nothing of his past and wonders of his future…. until the unexpected arrival of a mysterious ship changes everything.

Joining a misfit crew running from a dangerous dwarven empire, Valrin learns quickly what it means to be Stormborn. In this epic three book set, you will meet the strangest of the strange. From men forbidden to die to cannibalistic shadow elves and a dwarven necromancer. Embark upon the cold, dark Glacial Seas and unlock the power of an ancient lost race.

Embrace this epic fantasy adventure and discover that sometimes the most dangerous enemy can be your own dark desires.