For a moment his lips twitched as if he wanted to argue, but finally he nodded. “Please don’t mess this up.”

“Believe me, I don’t want to be at the bottom of the ocean any more than you do.”

She got a running start, then leaped and grabbed of one of the ropes that led to their quickly deflating balloon. She put all of her power into shimmying up the side as fast as possible.

Gusts of wind blew and the ships shook, causing her to lose her footing more than once, but she held on tight with her right hand, refusing to give in. Whatever higher power was out there knew it wasn’t her time, whether that was gods, Michael, or simply herself. She shouted and pulled against the wind, clenching the rope with her other hand and then her legs. Rain pelted her as the storm started to catch them again.

“Hurry!” a voice shouted, carrying distantly in the wind.

Lightning flashed in the nearby clouds, lighting the dark sky, and for a split-second her mind went back to nights training with the Duke. Stormy nights, just like this, where he would have his closest few, his chosen, climbing buildings, shinnying across electrical wires that had long ago been removed from use, and crawling through mud. In part it had been to test them and train them for what was to come, but Valerie had always known that the larger part of his purpose was reminding them of their places beneath him.

Now she was at the top, in a sense; the most powerful being she knew besides Michael and Akio. Yet there she was, climbing some damn rope in the middle of a lightning storm over the Atlantic. She had to shake her head at the thought, wondering what sort of idiot got herself into such a predicament.

She finally reached the rain-drenched balloon at the top of their airship. It was losing air fast, though still maintaining its bearing, to a degree.

If it had been fully inflated, she wasn’t sure this would have been possible. With all her power, she thrust herself up and out, losing connection completely, and in that moment she could imagine simply floating away, never to be seen again.

Then she connected, grabbing the balloon, nails digging into it. Her muscles bulged as she pulled herself up over the edge until she reached the point where she could run along the top. It caved in slightly with each bounding step, and each time she imagined the next one would simply pull her into its folds.

Not ten paces ahead she saw the other ship. She could even could make out Cammie at its helm shouting orders, and then saw two sailors being lowered over the edge, preparing to cut her ship loose.

“HOLD!” Valerie shouted, her voice projecting over the storm. They looked up in shock, and one nearly had a heart attack. He slipped, the wind and rain doing their worst, and slid off toward the edge of the balloon.

Valerie threw herself forward, catching him with one hand as her free hand’s nails dug into the balloon to keep them both from sliding off.

With a heave, she had him back on his feet and they joined the other sailor.

“Not yet,” she told them when they were secure, then shinnied up one of the ropes they had left dangling over the side of their ship.

Cammie met her at the top, hand out to pull her up. Valerie took the hand, and was soon on the solid deck.

“What the hell do we do now?” Cammie demanded. “This is a complete shit-kerfuffle!”

“Too easy, so no. But what’s not easy is figuring out how to get us out of this mess.”

“I got this,” Valerie told her, darting toward the control room. “You just tell your men to cut us free on my mark.”

Cammie gave her a skeptical look.

“Have I ever messed up something like this?” Valerie asked.

“Not for me.” Valerie reached the door and threw it open, then shouted back. “Get them ready!”

She waited to see that Cammie was conveying the order, then stepped in and closed the door behind her.

Judging by Captain William’s wide, confused eyes, she must’ve been quite a sight. Wind-swept, drenched hair going in all directions, she imagined. If she let her eyes glow red, she would probably have looked like some storm god.

Her ears adjusted to the relative silence, and she stepped forward. “Time for some quality bonding time. And by that I mean, do exactly what the hell I say. Got it?”

“Good.” She gestured to the wheel. “Hard left when you feel us lurch, then I’m going to need you to bring us around so that we’re nearly even with my ship.”

His eyes lit up. “You meant to mount me!”

“Yes, same thing.” He blushed, turning back to the wheel. She knew he’d just realized what he’d said, and had to chuckle despite the annoyance at how her clothes were clinging to her. A glance down, and she completely understood why his mind would have gone there.

Opening the door, she waved to Cammie. “NOW!” She nodded to William, and then it all happened in a blur. The ship jolted free, then practically nosedived, turning as she went. After a moment she leveled out.

Men and women shouted, then another jolt was felt as hooks met the side of the ship.

Valerie came back out on deck, watching as the ship, with her awesome carved skull and the new map she’d been working on in the captain’s quarters, began to drop away.

“QUICKLY!” Eyes scanning the ship, she watched her men and women shinny over the rails. There was River, working to ensure that Martha was on a rope, but it wasn’t looking good for him personally.

She turned, looking for a hook and rope. There wasn’t time to act rationally, so she did the next best thing—she acted like a maniac desperate to save someone. She snatched up the rope and ran, swinging the hook as she did so, and jumped.

As she fell, she threw the hook so that it caught on the side of the ship, then held on tight as she swung down. With one arm, she scooped up River as her ship lurched onto its side.

Had someone not been on a rope at that point, they would have certainly fallen to their death.

Valerie jolted as the rope came to the end of its swing, but she held on tightly to both rope and boy, and then, as the started to swing back, she hefted him up.

“Hold on,” she shouted, glad to see that he did. “Everyone up, before the next gust gets us!”

When they were all safely aboard she followed, falling to the deck after she topped the rail. She was keenly aware of the inch of water she was lying in, but she was already so soaked at that point that she didn’t care.

“Will someone tell the captain to get us the fuck out of this storm?” she said, not bothering to raise her voice now. She knew they would be on it.

FROM JUSTIN >>> As we move into the final days of our pre-book 7 lives, I’m happy to bring you another snippet from the book to tide you over. There are some cool connections in this book to others in the KGU… did you notice any yet? Or guess at what might be coming? I think this is the most fun about writing in a shared universe – the cross-promotion and little “Easter eggs” we can place in the stories for you all to find.

And on that note, I know this isn’t an INDIE book (which I normally share), but I had a friend ask about it the other day and I couldn’t believe he hadn’t read it! So, my recommendation for the day is: 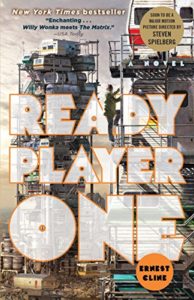 The bestselling cult classic—soon to be a major motion picture directed by Steven Spielberg.

Like most of humanity, Wade Watts escapes his grim surroundings by spending his waking hours jacked into the OASIS, a sprawling virtual utopia that lets you be anything you want to be, a place where you can live and play and fall in love on any of ten thousand planets.

And like most of humanity, Wade dreams of being the one to discover the ultimate lottery ticket that lies concealed within this virtual world. For somewhere inside this giant networked playground, OASIS creator James Halliday has hidden a series of fiendish puzzles that will yield massive fortune—and remarkable power—to whoever can unlock them.

For years, millions have struggled fruitlessly to attain this prize, knowing only that Halliday’s riddles are based in the pop culture he loved—that of the late twentieth century. And for years, millions have found in this quest another means of escape, retreating into happy, obsessive study of Halliday’s icons. Like many of his contemporaries, Wade is as comfortable debating the finer points of John Hughes’s oeuvre, playing Pac-Man, or reciting Devo lyrics as he is scrounging power to run his OASIS rig.

And then Wade stumbles upon the first puzzle.

Suddenly the whole world is watching, and thousands of competitors join the hunt—among them certain powerful players who are willing to commit very real murder to beat Wade to this prize. Now the only way for Wade to survive and preserve everything he knows is to win. But to do so, he may have to leave behind his oh-so-perfect virtual existence and face up to life—and love—in the real world he’s always been so desperate to escape.

A world at stake.
A quest for the ultimate prize.
Are you ready?