She planned on returning in time, but it wasn’t exactly like she could rely on plans in this crazy world.

Now she had the captain’s quarters, as Captain Reems had insisted. Cammie and Royland had come along, and were taking care of the boy, Kristof, in the only other room, leaving the captain to bunk with the rest of the crew.

He was still welcome, of course, and at the moment was sitting at the desk while Valerie sketched a map into the bulkhead with her vampire nails. She could have used a blade, sure, but it would have dulled the blade. With Michael’s power surging through her, those nails were damn powerful.

“So you’re saying we go north of the island?” the captain said, pointing to the section she had just carved.

She took a step back, looking it over. Basically, she had created a map that showed the coast of America and Canada, with her best estimate of where New York, Prince Edward Island, and the Golden City were. She also made little marks farther to the left, to indicate Cleveland and then Chicago, but didn’t bother making the distance to scale.

Then there was the ocean. She remembered how they had sailed from France, and Reems had made a couple of journeys to Spain in his time, so together they had been able to piece that together.

But everything north of there was conjecture. They knew there was land north of the path their journey from France took, because they had seen it on their way. It wasn’t like she hadn’t met people who had made their way across the water, immigrants from England, Scotland, and Ireland, so she assumed that had to be that. She wrote those three on the landmass, but had no idea how large it was.

They were currently over a landmass that she thought was likely either Iceland or some unknown islands north of Scotland. So far the journey had taken them two days—two days of smooth sailing through the skies, two days of sailors telling stories, singing songs, and even a bit of dancing one evening.

She had been quite surprised at the pipes on the one named William, but that boy loved to sing. It was nice, because that wasn’t something they seemed to get much of. She certainly hadn’t back with the vampires of Old France, except for one night she remembered going out and watching a family and wishing she had that.

Then Sandra had come along and, in a way, she had her family.

“The island could be small or damn huge, I’m not sure.” She took her pointer nail and made a large X to the northeast of the island. “And our destination is somewhere up here, to my understanding. In a land once called Norway.”

A knock sounded from the door.

Martha came in, her face pale. Considering the fact that she had been a pirate of sorts, sailing and working in the open air, which gave her skin a tanned, leathery quality, pale was saying something.

“The hell’s going on out there that’d make you look like a ghost?” Valerie asked.

Valerie turned to him now too. “Isn’t it your job to steer us clear of storms?”

“My job is to get us to X on that map.” He stood, putting on his leather vest and then a broad captain’s hat. “The crew needs to warn me of storms before it’s too late, so that I can then get us through. I hope that’s what is happening here?”

Martha gave him an apologetic shrug. “Seems the crew isn’t exactly used to the skies this far east. I mean, really the best crews, the ones that went out this way, they were all with the Prince, and likely died with the prince. We’re sailing with the best we’ve got, and that ain’t saying much.”

“Spare me the excuses,” Reems said, moving for the door. He paused, looking over his shoulder. “I imagine we’ll need all the help we can get it, if it’s bad enough to give Martha here the shakes.”

Martha rolled her eyes, but sure enough, her hands were shaking. She quickly hid them behind her back.

“You weren’t ever really much of a sailor, were you?” Valerie said, grabbing up her own hat and strapping on a sword, just in case. For all she knew, they might find air ships out there with pirates waiting for the attack. Maybe Europe had evolved with pirates who controlled the storms just for this purpose, for all she knew.

“There were those of us on the island who sailed, and those who ran things,” Martha replied, following them out through the door and up the darkly-lit stairwell. “Since the running side of things required less killing and all that, guess which I chose.”

“Good for you then,” Valerie said. “Bad for us right now though.”

“If I could travel through time, I’d be sure to go kill a bunch of innocents for our better chance of survival right now.”

“Hmm,” Valerie paused at the top step, looking back with a smile. “Better to use it to go back a few seconds and decide against snark, so I don’t have to teach you a lesson.”

“Joking,” Valerie said with a laugh. “The day I start hurting people for speaking their mind is the day I’m no better than those I’m out here to put down.”

“Good for me, because right now I’m feeling a lot of snark.”

“Right now I’m feeling you two need to shut up and follow me,” Reems shouted, opening up the set of doors that led to the deck.

Valerie nodded in mock submission and followed with a quick glance to Martha like, You made daddy upset.

When she saw the storm, however, all the humor vanished.

She might have been a damn powerful vampire, able to heal from most wounds, able to walk in the sunlight, and even kind of able to read minds. Well, she could sense emotions, anyway, and right now a hell of a lot of fear was floating her way.

The fear made sense. A bit of it might have even been originating with her. Hell, if this ship went down or she was blown overboard, she imagined she would be able to swim for a long time, but the freezing waters would be damn uncomfortable.

And there was a chance, she thought, that she might not make it. It wasn’t like she had ever tested herself to that extent.

On deck, men and women were securing barrels of food that had been out for consumption, bringing them below deck or securing what they had to with rope. Many were heading into their sleeping quarters, while two stood at the helm with their arms spread, hollering into the wind.

Her voice must’ve carried over the harsh wind, because Reems stuck his head out and said, “Yes?”

“See to it that those idiots don’t go flying overboard.”

“You got it!” he shouted, voice barely audible, and then ran over to see to his men.

Valerie supposed it had to have happened sooner or later, considering what good luck they’d had so far.

The captain had just course-corrected and they were steering clear of the storm when a loud CRACK came from behind and they spun to see what had hit them.

Oh, no. In the chaos to control their own ship, they hadn’t been paying enough attention to where Captain William’s ship was, with Cammie and the others.

No more confusion about where it was anymore, because it hull had just struck their balloon, rending a massive tear in it.

“ALL HANDS!” Captain Reems shouted, pointing to the hooks and ropes used for boarding other ships in their pirate days. “Abandon ship!”

FROM JUSTIN >>> I can’t believe I have seven books going already! The real fun starts once they are on the ground, but… we’re not there yet 🙂 Hey, good news – nobody tried to steal my computer this time around! It has been a relatively calm writing period, unless you count those sleepless nights from kids waking up way too much. I think they can sense the new baby coming and are trying to remind us that sleep is a luxury we don’t always get. Sigh.

I have some really cool art work coming for my new scifi solo series coming in September, so I can’t wait to bring that to you all. It’s going to be a hectic couple of months though, so if you find me passed out at some cafe or on a street corner, just toss a quarter in the hat and tell me to get back to writing, haha.

Also, JN Chaney has a new release! Check out… 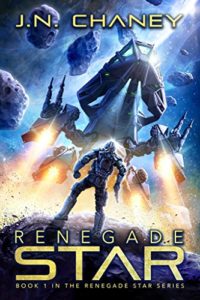 Jace Hughes is a Renegade.

That means taking almost any job that comes his way, no matter the situation. So long as he can keep his ship floating, he’s free to live the life he wants.

But that all changes when he meets Abigail Pryar, a nun looking for safe passage out of the system.
Too bad there’s something off about the cargo she’s carrying.

Jace knows he shouldn’t ask too many questions, but when strange sounds start coming from inside the large, metal box, he can’t help but check it out.

To make matters worse, he’s being pursued by unknown ships—people who want that cargo. Does Jace give up the goods and hand over the nun…or does he risk it all for an even bigger payout?

Experience the beginning of a sprawling galactic tale in this first entry to The Renegade Star series. If you’re a fan of Firefly, Battlestar Galactica, or Leviathan Wakes, you’ll love this epic, space opera thriller.

Warning: This book contains action, cussing, and general badassery. Read at your own risk.

GRAB IT ON AMAZON