Valerie took her first step into HQ in what felt like years, but really it hadn’t been more than a couple of months or so. How odd it felt, knowing that this building had once been home to her enemies. She had led a siege against Commander Strake and his Enforcers, then hunted him and the CEOs behind him down. The building had become her home after that, but now felt like such a strange, foreign place.

This sensation confirmed something she had been thinking about for a while now—that she didn’t belong here. But where did she belong? In space?

With a glance at the skies, she wondered what sort of battles were going on in space right now. Was it possible something could go wrong and it would all be over without her even getting a chance to fight?

Considering the fact that it was Bethany Ann up there fighting for their survival, she was hopeful.

Several men and women in black uniforms passed by, eyes wide at the sight of her. They all knew her, apparently, though she didn’t know them. She wondered if they had thought she was dead, or if that ruse had even stuck. Knowing the way information moved around this city, she wouldn’t be surprised if it hadn’t.

The elevator dinged and there was Sandra, her belly certainly leaving no doubt that the woman was moving along in her pregnancy. Otherwise, she looked the exact same.

Her eyes met Valerie’s and the two women ran forward, wrapping their arms around each other and laughing.

“How can such a short amount of time feel like an eternity?” Sandra asked.

“That’s a bit melodramatic,” Valerie replied, winking to show she was joking. “I see we’re not under attack yet?”

“Tell me we can afford not to be and I’ll gladly head over to your café for a bottle of wine. No? I didn’t think so.”

“Diego, Davies, and the rest are upstairs.” Sandra led the way back to the elevator and, once Valerie was in, she pressed the button.”

“The rest being all but Cammie and Royland?”

“And Sergeant Garcia. He was there the last time, so he went to show them the way. Cammie and Royland aren’t really part of the council anymore. Not at this point, anyway. It’s like they’ve moved on.”

“I know the feeling,” Valerie replied, staring at the wall as she lost herself in the events in Norway. She still regretted the loss of the sweet airship with her symbol carved into its side, but life was full of loss. Better a ship than a loved one.

“I haven’t changed so much,” Valerie commented. “You don’t have to look at me like I’m a stranger.”

“What’s that supposed to mean?”

Sandra shrugged. “It’s like, I see a different look in your eyes, you know? Like you’re ready to say good bye to us all.”

Valerie bit her lip. That was somewhat accurate, after all. “Not until I know you’re all safe. Not until I’ve taught these assholes a lesson and sent a message so loud the whole world will hear it.”

Sandra blinked as if she was holding back something she really wanted to say, but then just nodded. After a few minutes, she said, “I’ll be sad when that day comes.”

The elevator dinged, and she walked out before Valerie had a chance to respond. Upon opening the doors to the colonel’s office, Valerie was pleased to see Diego in there.

He smiled, but the first thing he said was, “I’m coming with you.”

“No!” Sandra stepped into the room, shoving him. “Don’t you start that, not again. I’m not watching you run out to your possible death while you leave me here again!”

“Can we start with a ‘Hey, Val, how’s it going’ maybe?” Valerie asked, glancing around to see Davies sitting at the table. The office was otherwise unoccupied.

She smiled. “Thank you, that wasn’t so hard. Peachy, Davies. A couple of my friends went off into the lion’s den without me, and now Sandra here is stalling.”

“I wanted to have Diego draw you a map, show you how to get to El Diablo, but instead he apparently wants to do is act like an ass.”

“Our ability to tell her where to go might get her lost, putting Cammie and the others in danger if Valerie arrives too late.”

“He has a point,” Davies agreed. “It’s not like you can just wander out there and find what you’re looking for just because you really want to. This is the real wor—”

“Enough out of you,” Sandra snapped. “Val, talk some sense into them! You can find the place; you’re great with direction. You found your way back from Norway, after all.”

Valerie nodded slowly. “I didn’t get out of the airship. I thought I’d want to, but when I was there, I just…didn’t feel the need. It’s in the past, not a part of me I need to explore anymore.”

“All about the next step now, huh?”

Valerie nodded. “That’s right. And right now, as much as I want to side with you, Diego has a point.”

“Take Davies!” Sandra countered. “He was there.”

Sandra looked desperately at Davies, but he shook his head.

“Call me a coward,” he stated, “that’s fine. But me going back out there? Not very likely unless I’m ordered to, and then it better be alongside a damn army.”

“Valerie’s better than an army!”

“True, but… Am I being ordered?” He looked at each of them, though none of them were in his chain of command. “If not, I’ll have to side with Diego on this. He really is the only option.”

“Dammit.” Sandra pulled out a chair and sat, arms crossed. She took a deep breath. “Okay, that’s decided. I’m over it. Plan?”

Valerie hesitated, but then cleared her throat. “Can we bring everyone back here to New York and then take a strike team out to deal with the enemy?”

“That’s one strategy we’ve been mulling over,” Davies replied. “Problem is, some of the people don’t want to leave their homes.”

“Then we make them.”

Diego chuckled. “Yes, that’s an option. A very Valerie option, which is why you’re in the ‘kicking ass’ business instead of the ‘making friends’ business. There’s an old man in El Diablo—Pops. He won’t go easily, and the folk who live there aren’t keen on forcing him.”

“There might be other villages too, and other situations like Pops’,” Sandra offered. “We can’t go around the world making everyone pile into New York. The city would burst.”

“So what do you recommend?” Valerie asked.

“We simply have to destroy our enemies,” Sandra answered. “Set up in these different towns if we must. Defend and destroy, that’s our motto. D and D.”

“D and D… I like that. Or the Double Ds.” Valerie pursed her lips in thought. “Okay, so if it’s all about the Double Ds from now on, why are we sitting around here pulling an SOOA all day?”

“’Sitting on our assessment.’ Let’s get moving.”

“For the record, Val,” Sandra commented, “acronyms don’t work for everything. Let’s leave that to me. Also, don’t you let Diego get hurt or you’ll be answering to me.”

“All about the threats these days,” Valerie replied with a laugh. “’Don’t let my man get hurt, don’t miss the baby.’ I get it.”

“I’m damn serious about both of those.”

Valerie nodded, then held her friend by the shoulders. “I know you are, and I promise to do my best on both accounts.”

Then she gave her friend a quick kiss on the forehead. Sandra wiped it off with a confused look, but laughed. “Whatever, just go kick their asses.”

“Who said I need looking after?” Diego muttered as he started to follow Valerie toward the hanger bay where they kept the Pods.

He paused to give Sandra a more thorough farewell and convince her he would come back in one piece, leaving Valerie to linger in the hall. She spent the time assessing the places where they had tried to cover up and repaint the holes where bullets had hit the walls. In a sense, this building was as much a member of the team as any of them, she thought.

When they were ready, they made their way to the Pods and soon flew out, watching New York grow small beneath them as they rose, then disappear in the rear display.

“She will come after you, you know,” Valerie stated. “If you die, I mean. She’ll go into the afterlife and pull you right back here so she can unleash her own version of hell on you.”

Diego chuckled, glancing back at the city. “I don’t doubt it.”

“Then we’ll just have to make sure you don’t take any shit, right?”

“Hey, any plan that involves me not getting hurt sounds good to me.” He thought about it, then added, “Or rather, not getting hurt beyond the point of healing. We have to defeat these sons of bitches, and I mean to do my part. Just…if you see any grenades about to take off my head, give me a shout. Deal?”

He leaned forward to assess the ground behind them, and pointed out the direction to steer. Soon they were well on their way.

FROM JUSTIN >>> That’s the last snippet before publication! Hope you like being with our old friends again, and want to see what they get up to next.

I’ve been sick these last few days, trying to write while my head spins. But no complaining, because I’m living the dream! (Except that I just tried to rent the new King Arthur movie and got some knock off instead. About Red Box, I will complain).

Mostly I’ve been able to enjoy these lsat few days, not feeling guilty about missing work, and able to write, take a break when I need to, etc. It works out well when you are your own boss.

And tomorrow I move on to kicking butt on the 4th book in my Hidden Magic Chronicles… coming soon!

To share a nice book today, here’s one I think you’ll enjoy by Luke R Mitchell. 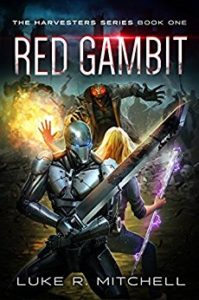 In a world overrun by space vampires, he’s the one who’s out for blood…

Amidst harrowing famine and deadly aliens who hunt humans and turn them into scaly mutants, Jarek is having a pretty good day. He survived Earth’s invasion, he still has his ship, and his prized exosuit with a built-in AI-companion is safe and sound. But when his weaponized suit is stolen, he’ll stop at nothing to get it back. Even if he has to break into the alien king’s stronghold to do it…

On the way to spring his imprisoned informant, an energy-slinging arcanist named Rachel lays claim to the same captive. When he sees her throwing around grown men with telekinetic powers, Jarek has no room to argue. After all, teaming up may be the only way to get out of the king’s stronghold alive…

After the partnership sends Jarek headlong into a world of trouble, he realizes he can no longer turn his back on Earth’s problems. Especially when every alien with a pulse wants him and the rest of humanity dead…

Red Gambit is the first book in an irreverent post-apocalyptic sci-fi series. If you like wise-cracking dialogue, galactic vampires, and endearing, gun-toting outcasts, then you’ll love Luke R. Mitchell’s powder keg of an adventure.

(Find it on Amazon)