Cammie glanced around the desert landscape and the town known as El Diablo. It was pressed up against a small hill with dead trees at the top that resembled devil horns, which looked especially ominous silhouetted against the night.

The first thing she had done was come to New York looking for Valerie. When she learned that Sandra had been in touch with her and that Valerie was heading for New York, her first instinct had been to stay there and wait. But the more she heard about the situation, the upcoming predicament, the more she realized that they had to get ahead of this war situation.

So here she was, with Sergeant Garcia and Royland. They had told the others that anyone who wanted to return to the island up north could take off that day. The rest would stay in New York to help fight.

It still amazed her that she had gone from the Badlands to this, and what a journey it had been. Now she had Royland at her side, and a group of close friends at her back. While she had felt like quite the badass before, now she stood tall, looking around this land as if nothing could touch her. Like she was on top of the world.

A crunch of rocks on hard dirt sounded behind her and she looked around to see Garcia stepping up next to her. His broad shoulders gave him an imposing silhouette, but he was just one more of her new friends, one more fighter who was with her to kick ass and not bother with the names. Garcia was the only one of the small group to travel out here today who had been here with Diego.

“That’s Micky,” Garcia pointed out the large man in a leather jacket walking toward them.

“And he’s on our side?” Royland asked to be sure.

“This place smells like the devil’s butt crack,” Cammie noted, scrunching her nose as a gust of wind carried sand and more of that smell. “They should’ve called the city that instead. El Diablo’s Butt Crack.”

Garcia shook his head at Royland for chuckling. “Don’t laugh at her jokes just ‘cause she’s your girl, first of all. Second, don’t say that kind of shit in front of them, and third…that’s not how you say butt crack in Spanish.”

She turned to him, waiting, but he didn’t offer the translation.

The large man nodded, then climbed up to the ledge where they stood. “What, too chicken-shit to just walk into town and see if you get shot or not?”

“Damn.” Garcia laughed. “After our welcome last time, I thought maybe you’d want to try to fight Cammie here before deciding if you trust her.”

Micky scoffed, but looked at her from the corner of his eye.

“Try me,” she said, smiling and revealing teeth that grew sharp as he watched.

“Diego got a sex change?” Mickey looked her up and down, ignoring the growl that came from Royland.

Cammie laughed. “I like this big dude, Garcia. Where’d you find him?”

“Tried to crack my skull open, that’s where.” Garcia replied.

“And we’ve been best friends ever since,” Micky added. “Well, ever since you soundly kicked my butt, right?”

“Trust me,” Garcia leaned in, conspiratorially, “if I could take you, you wouldn’t stand a chance against either of these two. So we can skip that whole challenge part, right?”

The man had a hungry look in his eyes, but nodded. “I’ll take your word for it. Where is Diego, though?”

“His woman wouldn’t let him come back out to play,” Garcia answered with a sneer.

“Sounds like a smart woman. He still wearing my vest?”

“No troubles yet?” Cammie asked.

Micky shook his head. “A couple of skirmishes—scouts, I think. And…we might be being watched. But those shit-lickers show their ugly mugs around here, we’re ready.”

“So, there’s no chance of you all simply coming back with us to New York?” Royland asked, although they had been over this in the airship on the way over more than once.

They had brought the airship so that they could ferry people if needed, versus a Pod that would only fit a few of them. The way they figured it, at some point the people might change their minds, especially if the fighting got really bad.

“Wish I could say there was,” Micky replied. “These people are loyal to their homes. Many don’t even think we have anything to worry about. Way they see it, we’ve survived out here this long, we’ll survive a little longer.”

“Damn hubris,” Royland muttered, but said no more after a glance from Cammie.

“Well, mister,” she nodded toward the town, “I suppose we’d better see this place that’s so very precious.”

Micky laughed. “I’m sure it will live up to your expectations. Come on.”

He led the way past some huts to another large man who introduced himself as Arturo. A redhead poked her head out of a doorway and blew a kiss to Micky, then waved to Garcia before ducking back in. Cammie saw as the door closed that she’d only been in a towel.

“At least you still take baths out here,” Cammie noted.

“Ha. Only in our enemy’s blood.” Micky winked, and Arturo laughed.

They turned a corner as Micky explained to his buddy who Cammie and Royland were, and then a man came charging up and plowed into Arturo. Fists started flying and more of the townsfolk emerged, some rubbing their eyes. They had already gone to bed, apparently, but everyone wanted to see what the commotion was.

FROM JUSTIN >>> Just a little teaser here, to show you what Cammie and Royland are up to 🙂 Today is a good day, I feel it. It’s the day I have to finish writing this book! I already wrote the ending, which was an emotional roller coaster, but I love it. Everyone I’ve showed it to loves it. I hope you will too!

Next for me is jumping right into the final Hidden Magic Chronicles book, Shades of Justice. Stay tuned 🙂

As for today’s share, I have to warn you – if you don’t like seeing a woman’s rear end on a cover, look away! Haha, but seriously, Andrew is awesome. A lot of you already read his books, and you’re definitely familiar with his cover work if you read in the KGU. So here it is, Andrew Dobell’s… 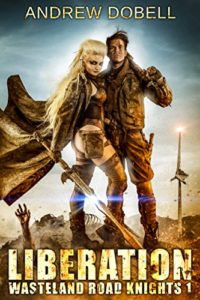 The Road Knight of the Wastelands brings justice to the Apocalypse.

After the firestorms of the Cataclysm twenty years ago, the world is an unforgiving endless desert filled with undead Zombies, powerful Daemons and cruel warlords.

Travelling the wasteland in his V8 charger, wandering badass Nero travels between the remnants of humanity, fighting zombies and offering his services as a warrior in return for food, supplies, and ladies of the night. After all, what’s he got to look forward to, a comfortable retirement?

Arriving at the fortress known as the Watchtower, Nero meets the slave girl Nyx, a beautiful young woman, skilled in the use of a sword, held captive by the Watchtowers ruler.

After a Daemon attack, events begin to spiral out of control and Nero discovers the secret Nyx has been hiding from her master. Now he must choose between the life he knows alone in the wastes, or helping the fascinating but vulnerable Nyx, and changing his life forever.

That’s okay though, after all, you know what they say, if at first you don’t succeed, shoot it again!

GRAB IT ON AMAZON