Alice and Scorpio passed an opening where the hall led into a larger chamber, light falling down on them. The SCIF was hidden in the inner workings of the space station, one of many secretly carved out rooms in this subsection. As they continued along the corridor, several guards stood at their posts, pretending to be working on repairs if asked by outsiders.

Alice greeted each of them with a nod, stopping to hand a few metal chips to an especially large one they called the Bull. They exited their hall to find the section with the head and another hall that led to their private chambers.

“Don’t have to remind me,” he said, eyes finally abandoning that hard look he so often wore, turning to her with compassion. “We’ll get those bastards, and we’ll learn the truth.”

“Is there ever a moment when you, I don’t know, wonder why we’re doing it?”

He frowned. “I thought I just said… the reason.”

“That’s not what I mean. My conviction is as strong as any, but why? Why is it necessary? What the hell kind of world do we live in where a corporation has this kind of power? It didn’t use to be like this.”

“And the new kids don’t know the difference,” Scorpio said, nodding. “I remember a time—”

“Hold up. How old do you think you are?” she laughed, in spite of the gloom hanging over her. “You can’t be a day older than me, and I’m… well, you don’t need to know how old I am.”

“Pretty sure you don’t have any secrets from me at this point. Point is, the why is because some piece of slime back on Earth approved it, that’s why. If you give the politicians power, they’re gonna abuse it. How it’s always been.”

He assessed her, then coughed. “Didn’t you say you had to hit the head?”

“Yeah, yeah.” She did feel herself starting to get a tad squirmy. Soon it would turn into a full-on dance. “Pull what you can, we’ll go over it in your room.”

“Roger that,” he replied, turning to the halls beyond and going on his way. Others were filling the area now, either passing to their rooms or using this walkway as a shortcut to their jobs. It was one of the many that were considered off-limits, but nobody actually followed that. And since pissing off the entire population of a space station wasn’t the best move on the part of the corporations that relied on them for a workforce, they hadn’t made much of a fuss.

Now that Alice’s team had attacked the corporation, she wondered how long the status quo would last. Right now, though, she had to take the Niagara Falls of pisses.

Making a beeline for the bathroom, she found herself a stall and, for the billionth time, wished to God they had bathrooms up here like she remembered from Earth. As a high-ranking civilian, she’d had access to the bathroom on the top floor of New Origins’s Earth building. Plush couches, floor to ceiling mirrors, even warm towels and complimentary perfume.

Here? Here she had a metal bowl, a metal seat, and a plywood stall. Not the worst, but since importing toilet paper was a bitch, they had to rely on the station’s recycling for that, and it was rough as fine sandpaper.

All the technology in the galaxy, and they couldn’t fix that.

If her husband’s supposed death wasn’t grounds for going after them, the toilet paper might have been.

She was about to stand, when she heard two women gossiping about the hit on the PD forces. She lingered instead as one mentioned the explosion and hack surrounding it, and said something about a clue left behind.

“What do you mean?” the other lady asked.

A glance down showed their feet—fancy red heels on one, so clearly not one of the workers, and sneakers on the other. Maybe on her way to the station’s fitness facility. Either the higher echelon, or easy money.

“Just what I said. A clue… rumor is there’s some trace, that PD has a lead.”

“Damn, you mean they might catch them this time?”

“Doubt it, but…” A pause came in the conversation, the sound of someone else entering, and then the two ladies leaving.

That wasn’t much, but it was enough to make Alice wonder if it were true. What sign could her team have possibly left behind? Unless, maybe, there was some sort of tracer built into the software. Some new form of leech, as they called them, waiting there for her team’s presence to be felt so that it could grab hold and trace them back. Damn, if that was true… She needed to check in on the team.

She moved cautiously, in case there was a chance someone was aware of her and the conversation itself had been a plant. Maybe she was being paranoid, but in a situation like this, she found paranoia always the best mindset to be in.

Nothing odd on the way back. A roar of hundreds of people walking and talking filled the halls now, and she quickly made her way to Scorpio’s room. Out here he was known as Cleat—not a bad name, but she could see why he didn’t want the rest of the team knowing it.

At the entry to the rooms, she nodded to the short doorman, said Cleat’s name, and was pointed to the hall on the left. She’d been here enough times to know where to go and for the doorman to know that she knew, but he had his job to do, so she let him.

The action gave her pause as she wondered about some of the other members of her team. She knew the general direction Intrepid headed off each night, but not more than that. Norwal always seemed to be with Swinger, so her room’s location was a mystery, too. A common moral dilemma for Alice, in that. How much should she follow them, spy on them, and know everything about her team?

In this line of work, trusting everyone didn’t seem the smartest course of action.

Stairs led to the next level up, and for a moment she was jolted as the station’s rotational ribs must’ve hit a glitch. But then all was good and she was moving again. It was always a worry that something would go wrong and they’d have to live with zero gravity until the technicians fixed it, but so far that had only happened three times in the year that she had lived here.

“Psst,” Scorpio hissed at her, from the opposite direction of his room. She saw him in the shadow of an area that, she was pretty sure, normally had a sheet metal wall. Sure enough, as soon as she joined him he put the wall back and held out his wrist for light. He wore a bracelet with a screen on it, which he used to pull up a map of where they were at that moment.

She wasn’t aware he had that, and from the look of it, was pretty sure it was a hack from the security system.

“I know all of your secrets, doesn’t mean you know all of mine.” He winked, then held up the screen for her to see. Next, he pulled out the screen from their SCIF. Holding them together, he waited for her reaction.

“Ah, hell.” She took the second screen, placing it over the first to ensure she was right. Sure enough, the map showed his room as well as Swinger’s and her own. They were all blinking with a red X. There were more, and she guessed a couple of those were Norwal’s and Intrepid’s rooms.

“I heard something,” Alice said. “It’s all over, apparently. Two ladies in the head even knew. Check it out—they said a clue was left behind.”

She nodded. “Not a chance in hell. We would’ve spotted it. We’re too smart for that… unless someone did it on purpose.”

“Don’t say that.” He put the screen away, but left his wristband screen on so that they could see by its light. Not that she needed to see his face to know that his mind was already racing with questions as he contemplated the idea of who could’ve betrayed them.

“We have to be quick,” she said, already leading him out of there.

“You want to put our necks on the line for a traitor? I say we bail.”

That wasn’t even worth a response, but she gave it to him anyway, never breaking stride. “If we have a mole, it’s not everyone here. I won’t let the others be taken.”

He mumbled something that she didn’t hear and was glad to ignore. This was her team, her responsibility. No way was she abandoning a single one of them.

FROM JUSTIN >>> As you saw from the note at the top, I submitted the book to Amazon today (for a Feb 20th release date). Also, if you’re liking this, good news time – I just finished writing book two! It was a lot of fun, and I have some hot new set pieces. Other good news? I’m going to release it only five days after the first book! That’s the plan, anyways. Fingers crossed.

I’m also finishing up a penname book, so might reward myself with a bear 🙂

As for other books you should know about, did you all see that George’s second Mech Command (in the Seppukarian Universe) is out? People are loving it! 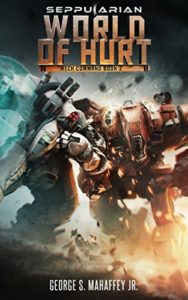 TIME TO TAKE OUT THE GALACTIC TRASH

Danny came, he competed, and he conquered.

Now a member of the Icarus Project’s elite mech operations team, Danny is tossed out of the frying pan and into the fire in WORLD OF HURT: MECH COMMAND BOOK 2.

Not only does he battle bands of rogue aliens and ginormous extraterrestrial fighting mechs in the desert and out on the ice, but he also uncovers evidence that forces him to question everything he thought he knew about the man who brought him into the shadowy Icarus Project, former billionaire technologist Jonas Xavier Vidmark.

Oh, and if that wasn’t enough, Danny also finds himself snared in a love triangle, while discovering that another alien invasion is likely just around the corner.

WORLD OF HURT: MECH COMMAND BOOK 2, the adrenaline-fueled sequel to NEW WORLD DISORDER, MECH COMMAND BOOK 1, ramps up the action as Danny struggles to survive in a world turned upside down while discovering that all may not be fair in love (and war) and friendship.