“Hang in there,” Bryant shouted. This was his Zen, in other circumstances. With the augments and enhancements the armor brought, fighting was the most natural thing he could do. But when another SEAL was hurting or in trouble, the thrill turned to concern and his actions went from instinct to carefully planned strategy.

He eyed the bug and realized that this was one of the Redan classes of the Wadunai, the official term for the bugs. Wadunai ranged in shape and size. Although many of them were about twice the size of a grown man, the praying-mantis type was the most familiar. The Redan were rare, only spotted via drone imagery. That meant they were close to the core, the final showdown. And if Bryant could get past this son of a bitch, his SEAL team would have a real chance at putting an end to this battle.

“AGGHHH!” Moldoon growled, and only then did Bryant see his hand gesturing. The slicer had pierced his shoulder through his armor, and his blood stained the ground. Bryant had to move fast.

Sliding in between the Redan’s additional slicer and the ground, Bryant did his best to interpret his teammate’s hand signal and rolled to his back as he pushed up with his thrusters. The move was dangerous, exposing himself like that, but he shot through while sending a barrage of bullets directly into the spot where the slicer met the creature’s armor. Sure enough, two shots sent black goo flying, and the slicer pulled out of Moldoon, dropping him to the ground.

That slicer reached for Bryant, but his momentum had taken him out of its range. He hit a rock and went spinning, tumbling across the ground to land at the edge of a cliff. A glance down showed the glowing stones below, and the massive core stone that shone with a brighter, unnatural light coming from its center. There was nothing magical about it, but scientifically speaking, Earther scientists were curious, to say the least.

Bryant wasn’t about to die here, so close to finishing the job. He spun as a shadow hinted at another attack. The rock where he’d been splintered a split-second later under the Redan’s slicer.

Then Moldoon was on the beast, growling and slamming a grenade into the opening Bryant’s shots had created.

“Back!” Moldoon shouted, but didn’t let go. He held tight to the creature’s carapace, then told it, “See you in hell.”

The explosion sounded, its blast sending Moldoon to fly off and over the cliff. Smoke billowed from the Redan’s wound and a second later, the bug collapsed. Nearby Wadunai saw what had happened and became panic-stricken. One of their strongest had fallen! Many fled, while others entered a frenzy of shooting their acidic saliva and striking as one, taking out a good number of the Marines that made up a majority of the force.

Bryant’s team came in close around him, though, and formed an outward-facing semicircle against the edge of the cliff. Their joint attack kept the bugs off them, while Bryant prepared to do his duty.

He had lost a man, and that stung.

“Got you,” Petty Officer Green called and knelt beside her, shooting one-handed while handing over a couple of magazines full of ammo. “Don’t spend it all in one place.”

“Forget that.” She slammed a mag in and chambered a round. “I’m going on a spending spree.”

More rounds and shots, and all around them the Marines were routing the enemy. Bryant drew a deep breath, steeled his nerves, and turned to the pit. One flip of his fingers gave him access to the switch. A quick flick across it activated the beacon. A shrill sound rose from the device in his hand, and as one, half of the enemy forces turned on him. Their silver backs started to glow, then they charged.

“Hold!” Bryant shouted as he did his best to push his rising excitement back down—his thrill at knowing that this could be the escape he so often longed for. If he simply let it happen and took no action, they could still win this thing and he wouldn’t have to face another day.

Instead, he shouted, “NOW!” and exploded into action. While he might not have anyone back home to care one way or another if he survived, his team depended on him. They had lost Moldoon that day, and Bryant wasn’t about to make them lose two teammates.

His team pushed outward, shooting the Silverback stragglers that were too close and therefore likely to blow up before the mass arrived, possibly causing problems. Marines all around were on the move, clearing the area as ordered to let the SEALs do their job.

Bravo Team charged in. They would be carrying among them an intercept device that would turn the tide of this war.

Of course, that all depended on his ability to see his mission through. He wouldn’t know whether the other team succeeded until he was back up top. If they failed, he would never know because he would be dead.

“This is your moment,” Bryant said through the comms and jumped over the edge of the cliff, taking the beacon with him.

>> And this will be in the same universe as PRIMAL LINK. It’s kind of a prequel, actually. 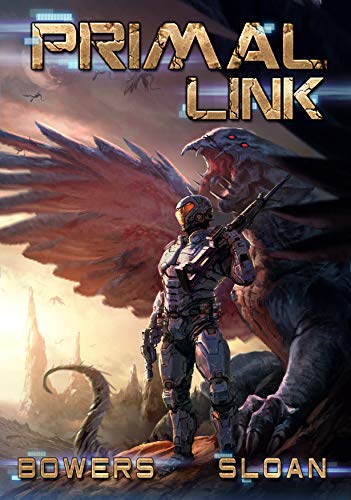