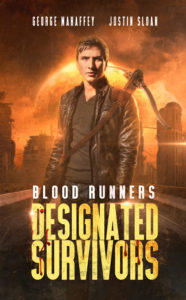 Each agonizing step caused waves of pain to flood Marisol’s body, but she pushed on, brushing aside the helping hands of the others, doing her best to keep up with Elias. There was no questioning his ability to run, he’d escaped her and the other Apes, after all.

But this wasn’t normal. Her breaths were coming in quick bursts and she felt the sensation of the earth convulsing beneath her feet, even though she knew it wasn’t. She stumbled, catching herself, holding her ribs where the pain of breathing told her she was at least still alive.

Wait, no, not pain of breathing, she realized as her fingers touched liquid. Her hand, she saw as she pulled it back in front of her eyes, was dark and shiny, sticky with her blood. For a moment she could almost feel the bullet, still burning, still boring through her flesh.

Thinking back to the flight from the wall, it all became clear. It was one of Longman’s men. He’d fired his gun and even though she’d ducked, something had slammed into her chest and stolen her breath. It must have been the shock from when they’d escaped the Thresher, that’s what had masked the pain. But now that she knew what had happened, agony gripped her body like a vice. Her limbs shook, her voice quivered and she did the only thing she could think to do: she called out for Elias.

Elias wasn’t sure he’d heard anything at all, but when he glanced back, he noticed Marisol wasn’t directly behind him as she’d been only a few moments earlier. She’d told the others that she was fine, that she could make it on her own, even though he suspected that was a lie.

Indeed,  she was fifty feet back now, staring at him with wide, terrified eyes, blood dripping from her hand. Her face was the color of chalk and she wobbled, struggling to maintain her balance. Elias doubled back, arriving just in time to catch her.

“We have to keep moving,” he said, turning to see the others hadn’t stopped, one arm wrapped around her as he looked at the wound. “The bastards shot you, Marisol.”

“I’m not an expert or anything, but I’m pretty sure it’s never good when you’re shot.”

He felt a spasm pass through her body and her eyes rolled back for a second. “We’ve gotta keep moving,” he whispered.

She tripped and he hefted her up, one arm around her with her arm over his shoulders, and together they pushed on.

The blood spritzed like a pin-holed pipe, misting Elias’s hands as he helped carry her over a path that ran through the middle of the alligator grass.

He could barely make out the faces of those ahead as they turned now, finally waiting for them to catch up. They were all oversized and presumably male but hard to tell under their gas masks. Judging by their looks and the flamethrowers and other guns in their hands, they could handle anything unlucky enough to spring upon them in the gloom. They didn’t stop, spinning instead, making for the coast.

Soon they were all running again, with muttered curses from the group ahead every time they looked back at Elias and Marisol. Elias was surprised the others hadn’t abandoned him and Marisol yet.

They passed rusted out cars, buildings with crumbling walls, ivy spidering over it all.

Pipes had burst from the ground, exposing underground plumbing, and the stench of old socks and moldy bread mixed with the cool night air.

As the moonlight escaped from behind a cloud, the procession stopped at a clearing near the edge of a spit of land. It rose over an estuary that curled out into one of the Great Lakes.

Several forms emerged from the shadows here, taking in the new arrivals with caution. Elias held Marisol close, eyeing each of them individually, refusing to show fright in his expression. First he took in an older, bullet-faced white man, then two younger girls with epicene features and sad eyes, and finally a striking woman with an excellent nose and high cheekbones who wore a vest studded with pockets that appeared to be overflowing with little tools and gadgets.

“Jessup,” the woman said, stepping forward cautiously, hand on a gun at her side. “What is this?”

The big man in the lead, the muscle-quilted one with a chaotic mane of thick, oiled hair, fully removed and tossed aside his gas mask, glaring at the two as his flamethrower fell to his side.

“We found ‘em back a ways,” he said. “They were alone out there, cornered by the Serks. Looked like they were running from that wall.” He motioned toward the wall, still tall and imposing from this far away, its spikes and concertina-like folds sparkling where the wall-mounted spotlights shone.

“Jesus, Jessup,” the woman said as she moved to Marisol’s side and helped Elias support her. “She’s bleeding.”

Taking the young woman from Elias, she gave Jessup a reproachful look.

“Brought her as fast as I could,” Jessup said.

The woman glared at him. “Dammit, this wound needed immediate pressure. What have I been telling you?”

“I’m doing the best I can here, Liza. Don’t grief me. I’m not a friggin’ nurse and none of us noticed ’til now!”

The woman, Liza, scowled, then said to Elias, “Down. PUT HER DOWN!”

Together, they lowered Marisol to the ground. A single bubble of blood oozed from the corner of her mouth, and she groaned, eyes turning up in her head. Elias thought, for an instant, that this could be her last breath.

The other men removed their masks and, as Elias looked around, searching for any sign that all of this was going to be okay, he noted the various ages and ethnicities: a black man, a heavily-inked Hispanic, a few off the assembly-line whites (including one who was pale and drawn), all peering down at Marisol’s seemingly lifeless body.

Suddenly hands were on him, and he spun to see the large man, Jessup, frisking him.

“Carrying anything I should know about?” Jessup asked, continuing to pat Elias down. “If you are and you don’t tell me, I’ll snatch the light from your eyes, kid.”

Elias shook his head. Jessup clenched his shoulder and repositioned him so that Elias was staring into Jessup’s fiery mug.

“Who the hell are you?” Jessup hissed, nearly spitting the words out.

Elias didn’t back down an inch. He stood his ground and returned Jessup’s icy look. “Who’s asking?”

“Kinda like to know who it is I’m most likely

about to dirt nap.”

The hair bristled on Elias’s neck as he made a

quick read of the situation. His hand instinctively slid down to where he normally kept a thin, shanking blade, but there was nothing there.

Jessup held up the blade and smiled darkly. “Looking for this?”

“Marisol,” Elias muttered in reply, betraying nothing in reference to the blade, “that’s her name.”

Jessup deposited the shank in a hip pocket. “You two thought, what? That you’d go out for a stroll in the tall grass where those butchers live?”

“The ones back there. With the white eyes. They’re called ‘Thresher.’”

“Pet names are a dime a dozen. We call ‘em ‘Serks’ on account of how they’re like the Berserkers that used to be around back in the olden times, although none of it explains why you were out here.”

“The ones from inside the wall.”

“That is strictly need to know, mister.”

“I’m the one holding all the cards, Elias. I need to know.”

Before Elias could respond, he heard Marisol groan and swiveled to see Liza on her haunches over Marisol.

Liza swung swiftly into action. She dropped to the ground and stooped over Marisol. She grabbed a plastic box with snap handles from a rucksack and threw it open. Elias could see the inside was filled with trays containing dozens of pills and tapes and things wrapped in plastic and paper. She removed several of the small tools from her vest and went to work.

Liza’s hands and eyes were a blur as she simultaneously examined the exit wound and did a quick assessment, checking for cyanosis (a bluish hue) in the young girl’s mouth, face, gums. She’d been an LPN, a licensed practical nurse before (a semester shy of becoming a registered nurse when the world ended), working for nine years on a med-surg floor of an inner city hospital. She was intimately familiar with gunshot wounds, and all manner of disturbances to the flesh caused by bullet and blade. Seeing the girl lying in the weeds, her life dripping away, brought back a rush of bad memories.

Removing a small stethoscope from a rubber pouch, Liza measured Marisol’s asymmetric chest movements, then placed two fingers on various points of her body to study her rapid pulse, decreased blood pressure, and distended neck veins. If this was back in the hospital, Liza would be clamoring to call a code, because Marisol was slipping. Liza gestured to Jessup who slid a knife under a tiny butane torch to sterilize it and then handed it to her as she slit a portion of Marisol’s outer garments and applied pressure to the wound.

Liza pulled out a bottle of amber disinfectant which she used to douse the wound. She peered into the black and red hole and inched the tip of the knife in until it nicked a harder object lodged inside. Luck upon luck. The bullet had been slowed by the girl’s body-armor, then apparently had jackhammered into a nubbin of bone and come to a stop. Not a very deep wound and probably not life threatening, but that was always a subjective call at the outset.

Twisting the knife, she delicately pried loose the slug, then dressed the wound carefully with non-porous surgical dressing which she affixed with horizontal bandings of tape. The dressing instantly splotched red, but Liza kept pressure on the wound and re-dressed it twice. Finally, the blood flow subsided and Liza breathed a sigh of relief.

FROM JUSTIN >>> George and I have been hard at work to get you all book 2 within 10 days of book 1 – because we know a lot of you read faster than we can write! Don’t worry, we didn’t rush it. The book has been done for a couple months or more now, but we’ve been editing it and making some sweet revisions. Hope it works for you!

Early on there was a comment that something in the book was too gruesome… We’ve dialed it back a bit, but would love to hear your thoughts on how it reads now, when it releases. This is just a section of book 1, but we’ll try to get 2-3 more snippets out by Friday (our hopeful launch day of book 2!).
Enjoy!
As always, I like to spread the word about another author in the genre, so today how about a book that Zach Bohanan and J Thorn’s baby…
D 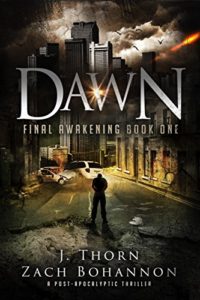 It’s always darkest before the Dawn.

When the Blackout arrives, Dax Harper finds himself alone and fighting for survival on the chaotic streets of New Orleans. He is on the run, desperately searching for his estranged sister as the riots intensify. An unexpected encounter with his ex-girlfriend thrusts Dax into a leadership position—one he’s not sure he can accept. As the hours pass, the city floods, pitting Dax in an epic battle against time and a mysterious new enemy threatening the future of humankind.

Grab it now if you’re into post-apoc series!