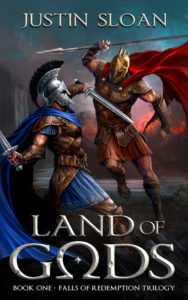 At long last, I’m happy to reveal my cover for LAND OF GODS! If you’re confused because this book was already published, here’s the deal – iterate and optimize, as the SPP guys say (Sean Platt et al). That was a place holder cover, as is the cover for book 2, RETRIBUTION CALLS.

Check it out and let me know what you think! Have ideas for book 2? Let me know – the artist is at work!

Want to buy it or read it free on KU?

Following the death of his father, Narcel longs to escape the ongoing violence and wars of the land of Braze. It doesn’t help that his mother is mayor of Valhia and his older brother the top advocate for war. Another point against Narcel is his devious cousin, and the fact that they both love the same girl.

His world is thrown upside down when first his brother goes missing, and then Narcel’s taken by the warrior Mawtu and made to become one of their slaves and fighters.

At first he’s all alone, caught between his will to live and his hatred for these people. But soon allegiances form and the legends of the gods begin to tempt him and his brothers. If he can survive through training and establish himself in these warrior ranks, Narcel may be able to bring this land and its people to the peace he believes it deserves.

When his two worlds collide, the warrior brothers he’s trained with and learned to love, and the village of his youth, Narcel is forced to make a choice that will inevitably bring Braze to levels of war it has never seen. 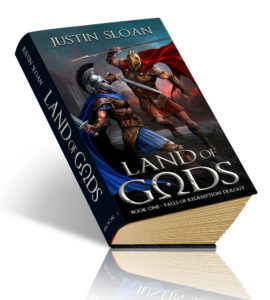