He blushed, giving it away—she’d guessed right. Those looks were the type lovers shared.

“I wasn’t entirely surprised when I found out about you,” he said. “Let’s just leave it at that.”

She smiled, now understanding the little piece of information that had been bugging her. Her style wasn’t to ask about such things though, figuring they’d come out eventually. And in this case, it just had.

“Very well.” She turned to Peterson. “What do you think we should tell them?”

“Well, ma’am….” He was more reserved than the other two, pulling at the edge of his pocket as if wanting to put his hands in there but knowing it’d be rude. “I suppose the wacko story would hold up during the day too, even though they’re known to mostly go out at night. Something about the drugs and how it hurts their eyes during the day.”

“But… I’d go with something stronger, to get the people in a defense mode mindset, in case something really does go down.”

“Interesting, and a good idea” She nodded her approval. “Tell them a nomad group, larger than any ever seen before, is moving this way. If we’re attacked, the people will assume that’s what is happening and be up in arms to defend their city.”

She turned to Sandra and tilted her head, waiting.

“It’s smart,” Sandra admitted. “I wish we could just tell the people the truth, but—”

“No.” Valerie shook her head, irritated. They’d already been over this. “The UnknownWorld must stay hidden! Of this, I’m certain Michael agrees. I’m his Justice Enforcer, and I’ll see that this city is running smoothly and ready for his return. We won’t have that if we have panic and riots and people looking in the shadows for monsters.”

“I have to agree with Valerie,” Wallace chimed in. “Imagine the mass panic in the streets if everyone knew.”

“But the Enforcers knew,” Ella said. “Strake knew, that’s for damn sure.”

“And look how they turned on my kind,” Valerie said. “Hunting us for our blood, killing us off when they were done with us. Those are not the type of conditions I’ll allow.”

No one had a response to that. The issue was settled, as far as Valerie was concerned, so she moved on.

“That being the case….” She looked to Wallace, taking one last moment to assess the man. They’d lucked out, coming across this cop when they’d first arrived. He was loyal and honest, as far as she could tell. At least so far, he’d proven himself. “Commander Wallace—”

“Not anymore,” she replied with a smile. “You’re getting a promotion.”

“I—I don’t know what to say.” He glanced at the other two, then back at her, sheepishly. “Are you certain?”

“There’s no one I trust more, and I need a regular human in the job, not someone a Were or vampire could sniff out. You’ll take charge of the police force, and there will only be the police force. I am the Enforcer, no others. Restore order, quell all talk of the UnknownWorld, and get us back in shape—no, scratch that—get us in better shape than we were before. We need the people ready to defend their lives and this city when the time comes.”

“You can count on me.” He stood a little taller, beaming.

“I know I can because I trust you.” She took turns looking each of them in the eye. “I trust each of you, and that’s why I’m counting on you three to weed out any bad cops. Find the ones that might have been on the take, or were considering it.”

“And what, toss ‘em from the roof?” Ella scoffed. “You’re no better than Strake.”

“Watch it,” Valerie warned. “First of all, you ever compare me to him again, and I might see if you can fly. Second, no, that’s not what I was going to say. Ella, you have experience in the matter. I want you to try and convince everyone you can, see if they’ll serve us loyally, and if not… what would you suggest?”

Ella went from pissed to intrigued in a matter of seconds, and Valerie knew this tactic was the right direction to take with this woman. Clearly, Ella wanted authority. Whatever she lacked in judgment, having gone over to the side of Commander Strake, she made up for in ambition and her willingness to stand beside her brother, Peterson, and her apparent lover, Wallace.

For a long moment, Ella jutted out her chin and considered Valerie, and then smiled. “Separate them out with cells alongside the ones who seem eager to join our ranks. The price of joining will be an extra day or two to act as if they haven’t made up their mind yet, but in reality be working to convince the others.”

“Ooh, I like that.” Valerie laughed. “Peterson, why didn’t you tell me you had such a smart sister?”

“The whole being on the other side at first kinda occupied most of my mind,” he replied.

“Make it happen,” Valerie said, then turned back to look out the window. There was no sign of Cammie or Diego now, but she’d have to trust they’d make it out of the city. Of course, getting out was the easy part. It was them having to go through the Fallen Lands that worried her.

FROM JUSTIN >>> This is one of the less action-packed scenes (I know, rare for me, right?), but I hope you still enjoy it! It all commences from here, and in our next snippet we’ll see what happens when Cammie and Diego get into some trouble. I actually think they’re quite fun as a dynamic duo – hope you will too!

And, for today’s other book recommendation, check out K.A. Salidas’ book…

Dissension (Chronicles of the Uprising Book 1) 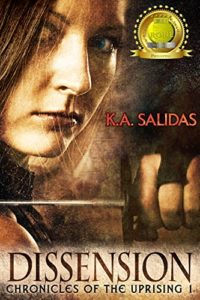 Everyone joked about the end of the world, but when it finally happened no one was laughing.

The great cataclysm wiped almost all life from the face of planet Earth, but tiny pockets of survivors crawled from the ashes, with only one thought: survival, at any cost.

But not all of those survivors were human.

In the dark, militant society that rose up in the aftermath, immortal creatures once thought to be mythical, have been discovered, assimilated, and enslaved. Used for blood sport in the gladiatorial arena, their lives are allowed to continue only for the entertainment of the human masses.

And there is no greater gladiator than Mira: undefeated, uncompromising…and seemingly unbreakable. A proven warrior with a blade as sharp as her tongue, she’s driven to survive by hope the humans have yet to beat out of her.
Escape.
Freedom.
Peace.

Now, after thirty years of servitude as a killer behind the Iron Gate, finally she has a chance to break free. But to do so will send her right into the path of Lucian Stavros, the city’s Regent, a human, and the man directly responsible for her people’s enslavement.

Stay tuned by following the Facebook page for the Reclaiming Honor series!