The entrance to Enforcer HQ was swarming with civilians, men and women asking questions about the night before. One woman shouted questions, wanting to know about the noise and explosions. A man claimed his neighbor swore he saw someone running around with red, glowing eyes.

“What in the world is happening?” An elderly man, carrying what must have been his granddaughter on his shoulders, asked. “We want to know what’s going on in our city!”

“We have nothing to tell you at the moment,” one of the police personnel guarding Enforcer HQ said. “You don’t like it, you can leave!”

Valerie, slightly out of breath, was watching this and not liking it one bit. Others continued to shout about destruction and missing friends or family members. She found that last part intriguing, since as far as she had seen, most of the fighting had taken place outside of the city walls. Out there where only the drugged out ones seemed to live. Somehow it hadn’t occurred to her that those druggies had families too, that every one of them was someone’s daughter, son, brother or sister.

Guilt pulled at the lining of her stomach, much as it had that day in France when everything had changed, and she’d left her vampire family behind.

“There you are,” Wallace said, running over from his police pod, which still hovered off the ground near the side entrance to HQ. “Sandra already went inside looking for you.”

“We have to put this to bed,” she said, glancing around at the crowd. When she looked back at Wallace, he had wide eyes and looked like he was about to vomit. “I don’t mean anything violent. God!”

“Oh!” His eyes closed tight. “That’s a relief.” He smiled, shaking his head. “The last person who ran this place…”

“Never connect me in any sort of manner to that ass-munch.” She looked at him and bit her lip, considering.

“What?” He wiped his cheek. “Got something on me?”

“Only my respect.” She laughed. “Okay, that was stupid, but you know what I mean. It’s just, I think you could play a larger role in this new city cleanup initiative I have in mind for us.”

He paused a moment, thinking it over, “I’d be happy to, but… in what way?”

She smiled playfully. “Let me mull it over a bit more and get back to you. Suffice it to say; I may want you to be the headstone for this place.”

Wallace’s brow furrowed in a nervous way. “You mean figurehead?”

“Of course, what’d I say?” Valerie was looking about, distractedly, because she’d just seen Rico and a team of his Weres inside the building, pacing angrily behind the large, glass doors.

“Yeah, headstone,” she agreed. Then, she started walking towards the building’s entrance, only halfway there realizing what she’d said and the difference between headstone and figurehead. However, she was a bit too distracted to laugh at her own choice of words. With a glance over her shoulder, but not breaking stride, she asked, “You coming?”

Wallace started jogging to catch up to her, and she heard him mutter something about being willing to die for the cause, but preferring not to be the symbolic headstone.

That time she did laugh.

“Something funny?” Rico asked, holding the door open for her from the inside.

“Haven’t lost your chivalry?” She quipped as she walked past and waited for the door to close behind Wallace. “How’s that chivalry stack up with the talk of backstabbing I hear is going on?”

Rico glared at her, and it was clear he wanted to turn to the room and eye each of them until one of them confessed to ratting him out, but to his credit he kept staring forward.

“Here’s the deal,” he said, leaning in, menacingly. “We’ve been talking. We don’t mean to undermine you or anything, but there are bigger pieces at play here.”

She held her ground, raising an eyebrow, “You’re afraid of Commander Strake coming back?”

He stayed silent a moment, “Not so much him coming back as the power of the three CEOs. These organizations and the armies they have under their thumbs…”

She interrupted, “So you’d hand the city back over to him?” Scoffing, she asked, “I thought Weres were supposed to be tough. And here you are planning to simply tuck your tail and roll over.”

His effort to intimidate her failing miserably, he moved back a little. “Tuck our tails and run, actually.” He looked around at the group of Weres on one side of the lobby. “Thing is, we’re not worried about running, if it means we live longer.”

Valerie decided to try and win him over. “We just defeated my brother. You have to realize…”

“No.” He backed up another step at the fierce look she gave him for interrupting her effort. “Thing is, we’ve never seen the chaos your brother was capable of, but we’ve seen these people. We’ve seen what happens to cities that fall into the hands of the Corporations, and we’d rather not be here when that happens.”

She cocked her head, “Then why’d you help me in the first place?”

“To defend the city against your brother. How were we supposed to know you meant to take control of the whole city when you were done?”

“I….” She had a fist raised, chest heaving, and then realized she had no answer for that. If she were in their shoes, the whole situation would appear rather odd. They didn’t know her, aside from the fact that she’d just saved them all, which was based on her word alone since most of the city hadn’t known they were in trouble, to begin with.

“They want to go to the Golden City,” Diego said, stepping up beside Valerie. She hadn’t even noticed where he’d come from. Damn, she was either really distracted, or this whole sunlight thing was throwing her off her game a bit. Maybe it just needed some getting used to.

“We call it Old Jersey, but actually it’s….” Rico looked around, realizing there were others aside from them listening. “Best not say anymore here. But yes, that’s the plan.” He waited, and she realized he was waiting for her.

“You want my blessing?” She scoffed. “My permission or something?”

“That won’t be necessary, but… some of the boys want to make sure you’re not going to stop us, or kill us for abandoning you.”

“Kill you for… what?” She threw her hands up and laughed, more out of exasperation than humor. “Do I like it? No! But the whole point I’m trying to make here, the example I’m trying to set, it goes against the idea of killing you simply because you don’t want to be a part of it.”

Several of the Weres breathed out sighs of relief, and even Rico looked like he’d just been granted a stay of execution.

He nodded to the door and was about to leave when Valerie called out, “Wait!”

They all froze, fists clenching.

“Just, can you go out the side door?” she asked. “If we have any enemies in the streets who see former Bloodhounds abandoning us, think of the image that’d send.”

“Right, sorry,” Rico agreed and the men shuffled off to her left.

As they departed, Valerie turned to Diego and shook her head. “Are we screwed here?”

“Maybe we should regroup in your office,” he said. “Sandra’s there, along with Cammie and Royland.”

She pursed her lips, but nodded in Diego’s direction. Looking around, there were, thankfully, some Weres and a few cops. Raising her voice, she called out, “Wallace?” The officer turned in her direction and she she made a motion with her hand to signal him over. He said a couple of words to the two he was with and jogged over to where she was.

When he was close, she leaned in and lowered her voice. “Listen, I need you to take charge down here. Please, set up teams led by men and women you can trust. Will you do that for me?” she asked.

“Wait, what?” he asked, eyes wide with worry. “I’m a good cop, but I’m not super good with leadership.”

“Hey, you’re trustworthy, far as I can tell.” She looked around the room, unsure what to think about the rest of them. “That’s more than I can say for most people in this city. Therefore, you’re in charge for me. We’re going to need someone like you to help weed out the rotten ones.”

He swallowed, but nodded his understanding.

“Good.” She turned to the room and held up a hand for silence. Everyone waiting stopped. “From now on, when I’m not here, Sergeant Wallace is in command. He’ll be giving orders, helping to fix this situation,” she motioned to the crowd outside, “so that the UnknownWorld stays secret. If you don’t listen to him, you will answer to me. And I have to warn you; I do bite.”

As she was talking she moved in front of the door, so those outside could not see her display. Those still in the room were treated to the spectre of her eyes turning red. Her fangs showing added extra meaning to the I do bite warning.

“You’re up,” she said to Wallace, then strode to the elevator with Diego close behind.

FROM JUSTIN >>> Ah, I had to cut this chapter in half, which is too bad because the second half is where it starts telling you more about where this is going. So stay tuned!

In he meantime, here’s a cool book to share with you by my buddy HJ LAWSON… 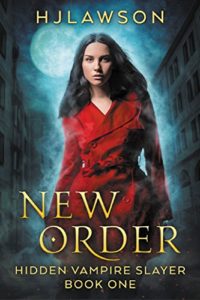 They were born to fight.
Created to win.
But the question remains…
Who’s the real enemy?

When Sadie heads out for the night, she hardly expects to witness a murder–much less a murder committed by a dangerous vampire with a thirst for vengeance and destruction. Within a few hours, Sadie and her boyfriend Aaron are pulled into a violent vampire world. Searching for a way to survive, they know they must fight, but this might be a battle they just can’t win.

Stay tuned by following the Facebook page for the Reclaiming Honor series! 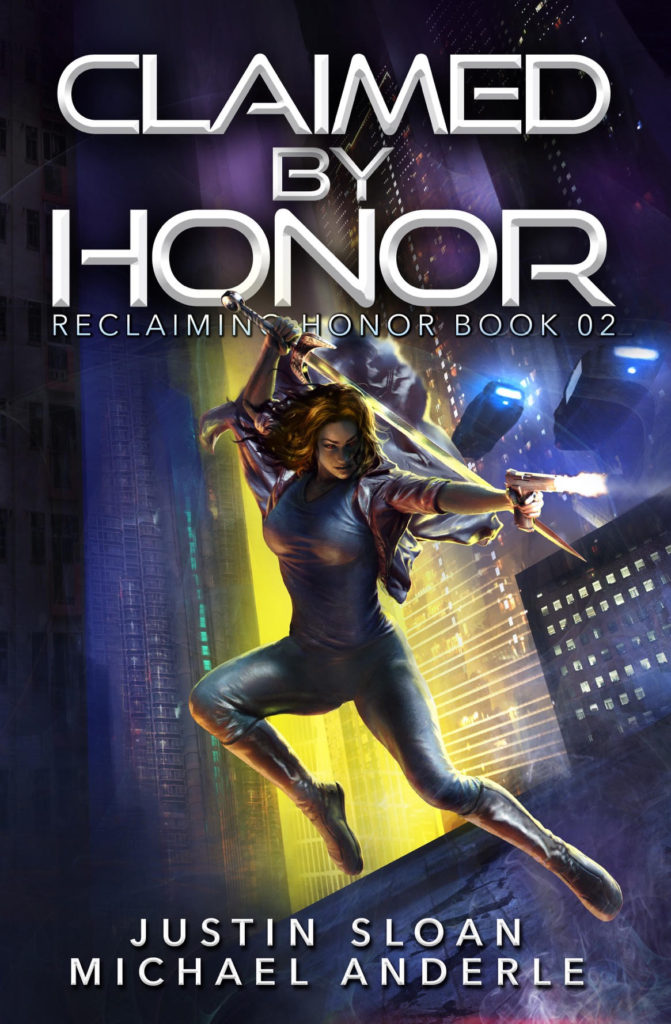