Valerie dressed, almost failing to notice the pirate blimp passing in the distance as she glanced back at Robin stepping out of the river. Moonlight cast shadows across the younger woman’s bare skin, shimmering in the droplets of water as they trickled down her breasts and thighs.

Had the blimp gone unnoticed, would Robin have not seen Valerie staring? Valerie bit her lip and turned away, embarrassed to be caught staring, and then froze as a different type of excitement took hold—there, on the horizon and traveling northeast, a dark shape moved slowly along the coastline. There was no doubt it was a blimp, and if it was up here, there was very little doubt that it was operated by pirates.

“It’s the wrong way,” Robin said, stepping up beside Valerie and picking up her clothes. She scrunched her nose and glanced back at the water.

“We don’t have time to wash them, too,” Valerie said, staring after the blimp, but very aware of the pale, nude form of Robin beside her.

“But we want to be heading inland.”

Robin pulled her shirt on with some difficulty as the fabric clung to her wet skin, so Valerie turned to her and helped. When the shirt moved down past Robin’s face, the two stood staring into each other’s eyes.

“You… looked like you needed help.” Valerie realized her hands were still holding the shirt, and that the insides of her hands were touching warm, smooth skin.

“My pants, please?” Robin’s expression was somewhere between annoyed and amused.

Valerie sighed, wondering what was coming over her, and turned to pick up the black pants. Kneeling, she turned to offer her friend the pants, only then realizing what an awkward position this was. She quickly stood and looked away. She thought it odd that a vampire should ever blush, but here she was, blushing like a ripe tomato about to burst.

“When’s that not been the case?”

Robin laughed. “Someone takes your family away and forces you to become a vampire and assassin, you stop worrying about beating around the bush. And on the topic of bush…”

“My God, I was seriously just handing you your pants.” Valerie said with a hand over her mouth. “I didn’t mean to look.”

Hmmm. Maybe that was true. Shit, everything was so confusing. She pursed her lips and glanced over her shoulder at the young woman. “Is there a point to this, or can we get back to pursuing the damn pirates so we can tear their throats out?”

Robin shrugged. “I figure if there’s something here that might distract you, we need to be clear about it.”

“I’m not distracted.” Fuck, she was distracted, she realized as the words left her mouth. She looked back at the blimp disappearing over the horizon and frowned. When she turned back to Robin, the woman had turned away and was pulling her pants up, the contrast between the moonlight on her pale rear and the dark pants made Valerie stare again, and then shake her head to clear it. “Okay, I’m totally distracted. I mean, but isn’t that good? We’ve been walking and walking, and if I don’t have something else to think about besides another day walking, or watching those fucking pebbles and the orange dirt, I’ll rip out my own damn throat.”

Robin pulled her pants up the rest of the way, zipped them, and then turned to Valerie with a smile. “Good. At least that’s out there. Now, I’m freezing and wet, and not in that special way right now, because we just saw a pirate blimp, right? So, let’s get on it.”

Valerie stared, dumbfounded, as Robin started walking. She was so used to being the one that called the shots, or used to Sandra making plays but in a way that still made her feel in control, that this was a completely new experience. Jackson had been a leader, but there had always been a hint of something in his eyes that reminded her he was an unaltered human while she was a vampire.

Here was a young woman calling the shots and telling it like it is, and Valerie found herself enjoying it.

She caught up with Robin and decided to join her in focusing on the pirates and not the other thoughts that, even with this new distraction, she couldn’t seem to keep down.

“We have no idea where it really is, except somewhere north of the lakes.” Robin gestured to their left where, through the darkness, they could make out vast stretches of land that, even with their vampire eyesight, seemed to stretch on forever. “As you said when we took off, we wouldn’t have a clue where to start.”

“So, we take them down along the coast, get our answers, and then move inland.” Valerie waited for the younger woman to nod in agreement, then added, “Great. I’m glad you’re seeing it my way.”

Robin sighed. “I don’t like it, but it makes sense.”

Valerie nodded. She had an obligation to the people of Old Manhattan, and that didn’t include wandering the areas of what was once Canada, searching randomly. She needed to stop the pirates from interrupting trade between Europe and Old Manhattan and had sworn to help Robin track down the slavers that had taken her parents. If they were lucky, the parents would be there waiting… But Valerie was doing her best not to get her hopes up.

FROM JUSTIN >>> Just a real quick one today, but I’m going to keep the snippets coming fast! This is the 5th Reclaiming Honor book, but you might be wondering why the cover looks different. Well, we’re going for something new! The plan is to redo earlier ones too, but I think we’ll start with this and the next.

Story wise, what’s happening here? The last book left off with these two ladies heading north, so here you go 🙂  And as you know, they were going to confront pirates. (Hence the cover. You’ll see).

And for this week’s other novel, let’s share Jason Anspach and Nick Cole’s … 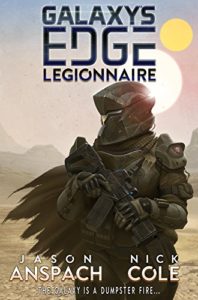 The Galaxy is a Dumpster Fire
A hot, stinking, dumpster fire. And most days I don’t know if the legionnaires are putting out the flames, or fanning them into an inferno.
A hostile force ambushes Victory Company during a reconnaissance-in-force deep inside enemy territory. Stranded behind enemy lines, a sergeant must lead a band of survivors against merciless insurgents on a deadly alien world somewhere along the galaxy’s edge. With no room for error, the Republic’s elite fighting force must struggle to survive under siege while waiting on a rescue that might never come.

When you think you’ve surrounded the Legion… you’ve just made your last mistake.