Valerie walked along a small ridge, looking out toward the water in the distance, an endless spread of darkness, wondering how far they would have to go before reaching the point where the blimp had landed. She was certain it would be along the coast, so it was only a matter of time.

With sunrise coming soon, however, she knew time was a luxury best not wasted. Unlike her, with the ability to walk in the sunlight and not needing blood for energy, Robin was a young vampire. If they hadn’t reached their destination and found shelter by sunrise, they could either set up camp, or cover the younger woman in the assassin clothes that protected her from the sun but made her look like a ninja.

Although Robin wouldn’t say so, Valerie was fairly certain the woman didn’t like wearing those clothes one bit. They had been what she was forced to wear by the vampires who made her, those same vampires that forced her to fight, although she had refused to kill innocents.

“How is it you avoided killing anyone, yet still had enough blood?” Valerie asked as Robin joined her and they continued on.

For a moment they walked in silence, their vampire sight helping them to see where they were going in the darkness.

When the first signs of red touched the sky over the water, Robin made a grunting sound, and then said, “It was Brad. He did it, pretended like I had so that I wouldn’t get into trouble.”

Robin scoffed. “I’m sure he would’ve liked that. But no.”

It wasn’t the first time Valerie had confirmed this, but she wanted to be sure. Robin couldn’t give her full attention to the fight and search for her parents if even half of her heart was back there in Old Manhattan. That’s where this Brad character now was, along with the rest of the surviving assassin vampires who had pledged their loyalty.

She knew that feeling all too well, and still laughed at the thoughts of when she’d gone after the blood hunters and sellers at the Bazaar. She had been so intent on killing them, while knowing Jackson was waiting for her, that she had even had thoughts of him in the middle of fights, flashing across her mind just long enough to be distracted.

It wasn’t that she was worried about losing, or death. She wasn’t worried at all, but she was concerned that distractions could lead to not accomplishing missions.

They paused for Robin to take a bite of jerky. She offered it to Valerie, who shook her head.

“We need to ensure we have enough for you, first,” Valerie said.

Robin chewed, glancing over at her, then swallowed. “If we find them, my parents, what then?”

“I don’t understand the question.”

Robin pocketed the jerky and stayed there, hands in her pockets. “They’ll be either dead, or part of a large slave community, I’d think. So…”

“We set them all free,” Valerie said, frowning as she wondered why this wasn’t obvious. “The people, vampires or not, responsible for making them slaves will face justice, and pay the price of such a crime with their lives.”

“Justice this, justice that.” Robin chuckled. “Can’t you just say we’ll tear their heads off and spit down their throats? We’ll gouge out their eyes with our claws, disembowel them with a fucking spoon, or tear off their genitals with a rusty hoe?”

“Fuuu—uck.” Valerie stared at her, wide eyed. “I could say all that, but then I’d have to sit in a corner, rocking myself to sleep in hopes that I could drive the images from my mind.”

“Just seems more appropriate, is all.”

“Do you ever wonder if the Black Plague vampires got to you more than you’d like to admit?”

“Fuck you,” Robin said, continuing the walk. “I have a vivid imagination. I’d like to see those vivid acts of horrible meanness inflicted upon the people who enslaved my parents. I can’t think of anything more natural and pure.”

Valerie caught up, bit her lip, and nodded. “You’re right. Of course you are.”

“You’re going to make me say it?” Valerie rolled her eyes. “We’ll snap their shins in half, then pull the bone from their flesh and use it to impale their hearts. Is that good?”

Robin thought about it for a moment, then smiled. “It sounds grosser when coming out of someone else’s mouth.”

“But we’re still going to do all those things, right?” Robin turned to her, eyes pleading.

“Damn, you look like a girl asking for a pony for Christmas,” Valerie replied. “Of course. We’ll do each of those things, even make a checklist and not rest until that checklist is filled with little, vampire scrawl check marks. Deal?”

They turned back, a smile on Valerie’s lips, when she froze. “Do you see that?”

“I’d place money on the latter,” Valerie replied, “and on one of them being the one we were following.”

They crouch-ran along the hill, until they were at a closer point where it was very clear that what they had seen was the blimps, and that there was a small outpost just beyond them. Valerie ducked now, not wanting to be seen, and motioned for Robin to do the same.

Next, she shimmied forward, pulling herself along by her elbows and staying low to avoid being spotted in the moonlight by the pirate outpost below. She wanted to see what they were dealing with before charging in, guns blazing and sword swinging.

Orange dirt covered her arms and clothes now, but she didn’t care. It was just one more layer of grime added to the yuck of walking for so long. Both were eager to move on and find their targets—the pirates disrupting Old Manhattan trade, in Valerie’s case, and for Robin, those responsible for possibly enslaving her parents.

Valerie watched the movement in the night, a small outpost by the looks of it. Lights bobbed around like fireflies, but in reality, she knew they were men and women with lanterns.

The lights moved around the large blimp closer to them, showing something was being unloaded.

“These are the fuck-stick jerks who took our stuff,” Valerie said.

“And the nose-bleeding dick sacks who will know where my parents are.”

Robin scrunched her nose, and shrugged. “Excuse me for not knowing something I don’t care about. We didn’t exactly have class on the stuff.”

Valerie shook her head. “A topic for another night. And… wow.” She sat there, watching for a moment longer, then asked, “Did you swear this much when we first met?”

“It’s an acquired taste,” Robin said. “And it tastes better and better the closer we get to these pirates.”

She was glad they had gone this way. Originally, they had meant to head northwest, having heard stories of piracy due north of the lakes where they had encountered the vampire, Gerard, and his followers. But there was something to be said about following the water, as the pirates at least started there and would provide a route from which to find the pirate haven referred to as Toro.

A ruffling sounded beside Valerie, and she looked over to see Robin, face-mask of her all-black assassin outfit pulled down as it often wasn’t night.

“You don’t have to dress the part,” she said.

Robin’s eyes narrowed. “It makes me feel better about taking a life… pirate or no.”

Valerie was about to stand up and lead the charge, when she put a hand out. “Maybe… we should proceed with caution?”

“I mean, because we need to ensure someone’s alive to tell us where to go from here.” Valerie gestured toward the hills and vast darkness around them, only a hint of red from the rising sun kissing the tops of the hills in the distance. “We need someone to tell us.”

Robin nodded, looking like she was about to say something, when—

“The hell was that?” Valerie asked, moving up to a kneeling position to get a better look.

Again the sound came, and there was no questioning that it was gunshots. A small fire went off from a muzzle below, then more, and then someone screamed as a dark form moved among them.

Valerie and Robin turned to each other with wide eyes.

“We gotta stop them from killing everyone,” Robin said, and then she led the charge down to the pirate camp.

FROM JUSTIN >>> This is the last snippet before the book goes out! So no more snippets, but my second Age of Magic book is going live soon too, so stay tuned from snippets from that and… 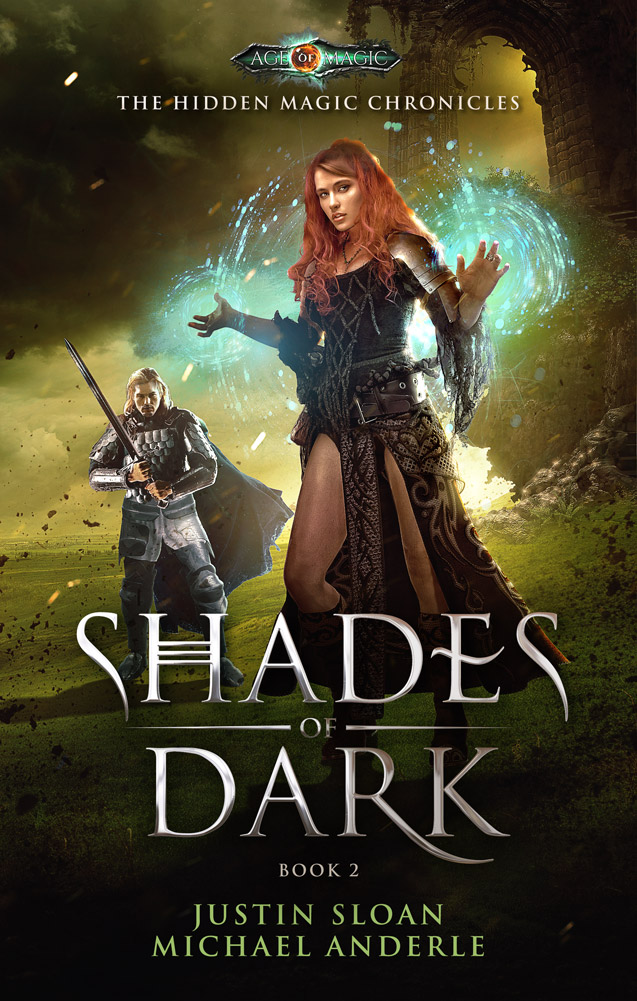 It’s the second book in my series that falls under the Age of Magic books, starting with the ones by CM Raymond and LE Barbant. Hope you get to check them out!