Sandra rolled over in bed, the nausea of early pregnancy already making her want to punch Diego for making this her reality. Not that she’d trade it for a second—she wasn’t some vampire set on dealing out justice. She was just a woman trying to survive in this crazy world, and in approximately eight months, a mom trying to keep a family safe in it.

That meant she had less than eight months to do everything in her power to ensure her world, or at least the world that could touch them, was as safe as possible.

Holding her own hair back over the toilet didn’t exactly help her in that goal, but at the moment seemed a necessary evil. She dry heaved twice, then heard a pounding of footsteps behind her.

“Dear?” Diego said, kneeling beside her and holding back her hair. “Is this… normal?”

“Haven’t known many pregnant women, huh?” The words came out with more of a bite than she had meant, but what the hell, she was pregnant. It was late at night, and she was in pain. He could deal with a little grouchiness.

“Honestly, none that I can remember,” he replied.

She nodded, knowing that made sense. In times like these, people weren’t eager to bring new life into the world. It happened, but even when people tried, it wasn’t exactly easy anymore. During talks with Diego at the small vineyard he had made for her, they had decided it likely had to do with the fallout of the collapse of civilization. Whatever had caused that had probably left lasting effects that meant childbirth either wasn’t for everyone, or just made it harder to conceive.

They had laughed about it, and that night laughed some more while they joked about how they could go at it like rabbits and not have to worry about repercussions. And damn, could he bring it. She wasn’t sure if that was the Were in him, or just him—not that it mattered, because him being a Were was part of who he was—but she couldn’t believe the levels of ecstasy he’d brought her to.

And now, as another shudder of pain and nausea swept over her, she just wanted to slap him for even considering touching her.

The way he held her hair back with one hand and caressed her back with the other was certainly helping alleviate that feeling, though. She sighed, closed her eyes, and then pulled herself together.

Diego helped her up and squinted, apparently unsure what he should do here.

“I’m not gonna bite,” she said, washing her hands, since they’d been on the bathroom floor and edge of the toilet. “That’s your job.”

“Are you… coming back to bed?”

She turned off the water and dried her hands, then wrapped her arms around him and gave him a loving kiss. With a smile, she took his hand and walked with him to the main room and the window that looked out over Old Manhattan.

The city was mostly dark but for the glow of moonlight and, in the direction of Capital Square, yellow and blue from neon lights. The view from their new home even showed Enforcer HQ, towering over them, its blue strip along the side lit up like a beacon of law.

They had been staying there before their journey with Valerie to Chicago, but since their return, they figured it was best to be out of the target area. Since dealing with the outside forces, the unruly of Old Manhattan had one main target, and that was Enforcer HQ. Not exactly the type of place you want to be when you’re dealing with pregnancy and figuring out how to raise a family.

“Where do you think they are?” she asked, breaking the silence.

He wrapped his arms around her, creating the perfect picture of a soon-to-be family in the reflection of the window. “You worry about Valerie so much. Will it ever stop?”

“Yeah, yeah. I know, she’s the most powerful woman around.” Sandra leaned her head back so it rested against Diego’s. He was on the shorter side, otherwise she would have been resting her head on his chest. Not that it mattered—he had certainly proven himself over and over, and shown that height had nothing to do with being a man or being able to protect your loved ones.

“The most powerful woman?” Diego laughed. “She’s a day-walking vampire who doesn’t need blood anymore to rejuvenate. That should scare you, not worry you.”

“People with power tend to put themselves in dangerous positions. She’s not invincible.”

“But she has that assassin chika with her,” Diego protested. “From what I saw, that girl could hold her own nearly as well as Valerie.”

“You were watching?” Sandra bit her lip and rolled her eyes at herself. “Sorry, pregnancy brain. I promise, I’m not jealous or anything like that.”

Diego rubbed her belly and kissed her cheek. “You’d never have any reason to be.”

She pulled back, looking from him to their reflection. “Are we really as sappy as everyone says we are?”

“Tell me who said that,” Diego replied. “I’ll tear out their eyes so they don’t ever have to watch us again.”

“Or ears so they don’t have to listen?” Sandra shook her head with a chuckle. “No, I don’t think that’s necessary. Let them talk if that’s what they need to do to get over the fact that they don’t have someone to love.”

Diego squinted, looking her up and down. “Speaking of loving…”

“Are you serious, you just held my hair back, while I nearly puked my guts out.”

“But nothing came up…”

“Yuck, man.” She laughed, squeezed his hand, and then moved to the bathroom while he lay back in bed. She turned on the shower. As she undressed and steam fogged the mirror, she assessed her belly, wishing she could see more of a bump. She couldn’t wait for it to stick way out, or for the days when she would be able to see the baby moving and kicking in there.

“Yeah?” he called from the other room.

“If our baby is a Were, he won’t like… try to claw his way out of me or something?”

“Dear, I promise that’s not something to worry about.”

“But if it was, you wouldn’t tell me anyway, would you?”

Silence. That’s what she thought.

It didn’t do any good to stand here thinking about it, though, so she slid back the shower door and stepped in. When she first felt the warm water cleanse her skin, all sickness and dreariness was washed away.

“Diego?” she called out.

“Don’t go to sleep just yet,” she said with a playful sing-song voice.

FROM JUSTIN >>> The second snippet! I hope you’re as excited as I am. Guess who will be in the snippet tomorrow? No really, guess? Some of my favorites (okay, they’re all my favorites, haha.).

I’m not going to write too much here, because I’m focusing on getting the book out. But to promote another book, here’s Natalie Grey’s … 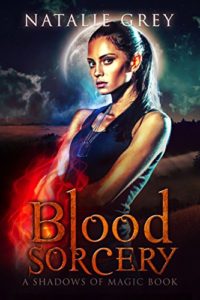 You know that awkward moment when one of your mortal enemies hires you to kill another mortal enemy?

They say the enemy of your enemy is your friend, but I’m not sure that’s true.

In fact, I’m not quite sure why I took the job.

Neither is Daiman. Apparently, druids don’t like being hit men. Who knew?

I don’t like making hits on people, either, but this might be the only way to find out the truth about my past…

…and stop Philip before he figures out how to turn me back into the crazy, mass-murdering bitch I used to be.