Sandra wanted everything to be perfect for the surprise party. She had arranged her best wine, one that dated back to the first post-collapse, from the vineyards of France, or at least so the captain who had sold it to her claimed.

Cheese was spread out with freshly baked bread, along with special meats she had imported as well. It wasn’t as much as she would have liked, given the interruptions to the imports from overseas. If Cammie and Royland really could come up with a way of dealing with them before she came back, she would be ecstatic.

If not, she was going to seriously consider bringing the wine making here. Cheese too would be tough, as everything they got now was from farms in Portugal and Spain, if the captains were to be believed. Sometimes she thought they were just saying it to make the goods sound more exotic.

Either way, she hadn’t noticed any farms near Old Manhattan, that was for sure. Grapes could grow in limited supply, but that wouldn’t do to meet the demand she was already faced with.

Even in this torn up world, New Yorkers loved whatever bits of decadence they could get.

“Need help with anything?” Diego asked, stepping up behind her and wrapping his arms around her, then purring seductively in her ear.

“Yeah, I need help controlling my boyfriend,” she replied. “He seems distracted.”

He pulled back and leaned against a wooden chopping block. “Everyone’s ready. She late?”

Sandra frowned, too worried about getting everything perfect to even think about what time it was.

“Now that you mention it.”

“Wait, the trays!” she said as she went back for the cheese and nodded for him to grab some wine.

They carried them out through the curtains, and then joined the other cops, Weres, and vampires. Curtains covered the windows and glass door, with a sign that said closed on the outside.

Cammie was supposed to bring Valerie back here to show Sandra her new outfits, and that was when the surprise would come.

“I think you should show her the green top first,” Cammie’s voice said, muffled from the back room along with the sound of two people entering.

“SURPRISE!” everyone shouted as the two walked in under the curtain.

“And I love you in green,” Sandra said, to a room full of laughter. “It’s blue I never liked. Too depressing.”

“But I almost always wear blue!” Valerie protested, hands on her hips as she looked around the room, taking everyone in. “This is too much, guys!”

Sandra beamed, but then noticed the slightly guilty look on Cammie’s face. Using the excuse of handing out cheese while Valerie took turns saying ‘hi’ to everyone, Sandra whispered to Cammie, “You let it slip.”

“Hey, I’m a werewolf, not a damned safe deposit box. You want secrets, don’t come to me.”

“Strange,” Sandra said, eyes narrowed, “how yesterday I distinctly remember you saying something along the lines of Weres being the best secret holders.”

“We’re also great at adapting to our surroundings, and right now, my surroundings include people looking to drink and be merry. So…” She gave Sandra a shrug and quickly side-stepped out, then maneuvered to the other side of the room.

Oh well, no use being upset when it was already done. Valerie did seem pleased, regardless of how surprised she was.

Sandra scrunched her nose at a lingering scent that seemed to have come from Cammie, but then it was gone. Like stale water, or rotten eggs.

All of the guests were trying to get their time with Valerie, though they hadn’t all been told the specifics. Just that the three would be going on a trip. Those that were in the know, like Wallace, knew to keep their mouths shut, while others had stayed at Enforcer HQ to keep up the defenses, or patrol the streets. Security had been doubled around the square and within a one-mile radius of the café.

That didn’t stop Sandra from glancing around with worry. Passersby were bound to hear all the chatter, and maybe catch a glimpse of light past the curtains. Private parties were incredibly rare around here, so she told herself there was nothing to worry about.

“This is some get together you’ve put on here,” Royland said, and she turned to see him sipping on a glass of red—the merlot, she guessed, knowing his tastes. “If we got hit right now, this city would be doomed.”

“You have people on the lookout?”

“Then I’m not too worried.”

They both turned to watch Valerie working the crowd, laughing and slapping shoulders.

“It’s fake, you know,” Sandra said. At a glance from him she added, “All of that, it’s not her. She has always been better off by herself, or with one or two good friends. I think it’s why she tried going into the shadows, before. She learned that it’s good to have others nearby who you can rely on, but I think she’d be happiest out there kicking bad guys in their throats.”

Royland chuckled and massaged his throat. “I’m certainly glad I’m on the right side then.”

“Not exactly, no. Depending on how you define good and bad. Was I striving for a higher place? No. In fact, I cared only for survival. Survival of my people, and to achieve that I allowed the unthinkable to happen.”

He looked troubled, a darkness taking over his eyes, so she put a hand on his arm and said, “Your past isn’t important here. We’ve all done bad things to save those we love.”

She stared at him a moment longer, wondering if he was going to tell her what was bothering him, but then Cammie came by, wearing her cowboy boots and a broad smile, and swept him away.

The man had some secrets, maybe a dark side to him still, Sandra thought.

An opening finally came and Sandra squeezed in. She didn’t want to occupy Valerie’s time, but just give her a hug and say, “Happy going away!”

Valerie laughed. “You’re coming with me.”

“I know… but I wanted to make sure you understood how much everyone here loves you. For some reason, I get the feeling you don’t see this place like home quite like I do.”

“Could it be because, until recently, they hunted vampires for their blood?” Valerie whispered. “Or maybe the fact that half the city still seems to want me dead… that might be it.”

“But… friends.” Even as Sandra said it, she understood Valerie’s point. It was hard to feel you belong even when a few people really want you there. It had been that way for her among the vampires under The Duke, when most vampires saw her as food or fuel for the next mission, and only Valerie truly treated her as a friend, albeit like a slave at times.

Valerie saw the look in her eyes, and Sandra knew the woman was doing that mind-reading thing, or whatever it was she sometimes did. It kinda creeped her out, but she smiled, trying to convey joy and excitement.

With a laugh, Valerie said, “Even without my weird creepy powers, I know you better than that.”

Sandra blushed and gave her a friendly push. “Go play with your friends, I’ve got to open another bottle the way Royland’s drinking.”

Before Sandra could go, Valerie grabbed her arm. “Thank you, I mean it.”

She nodded, and this time the smile was genuine.

As Sandra retreated to the kitchen, she gave Diego a wink and noticed the heavy way his eyes moved over her. Great, he was already a bit tipsy. Normally she wouldn’t mind, especially since he got a bit handsy when he had something to drink, and she liked the extra attention. But she had hoped he would help her clean this place up tonight.

Oh well, there was always tomorrow… or maybe she could pay someone else to do it.

At the curtains, Presley stumbled into her path, then paused and looked up at her with wide, captivating eyes.

“This vampire lady, what’s she always keeping you around for?”

Sandra frowned. Was this Were for real?

“Can’t you see,” Esmerelda said, stepping up behind Sandra. She lifted Sandra’s wrist, where scar marks from teeth still remained, though faint. “This one’s just food.” She leaned in and sniffed, then added, “I sure would like a taste.”

“Since I’m not sure if you’re hitting on me or threatening me,” Sandra said as she pulled away, “let’s just call it neither and say I got something to do.”

Esmerelda shrugged and put her arm around Presley, so that the two watched Sandra as she ducked into the back room.

Maybe she wouldn’t miss this city as much as she had been starting to think. No, this was her new home. The city where she and Diego had come together, and it would always hold that for her. As soon as this mission was over, she’d be right back with him.

She found one of the less special bottles, figuring the taste wasn’t as important the more bottles they all drank, and was winding the cork when the first gun shots sounded.

FROM JUSTIN >>> This is another snippet out of order, but I thought it made sense for similar reasons as the last one 🙂 We know Valerie is preparing for two things — to die (haha), and to go off and kill those bastard CEOs. Oh yeah! Exciting. So here I thought it would just be fun to show you some of the less action-packed stuff because (I swear) some of you like that stuff! Yes, some readers even say they want more. Here you go.

Guess what? The book is VERY close to launching. Stay tuned (I mean like, in the next day or so).

Last post I featured some reviews, but this week I wanted to get back to featuring other books. Did you see that Chris and Lee had their second Age of Magic release? And what’s crazy is that their first book is STILL kicking butt.

So, since you all already read that – here’s another one of their books! 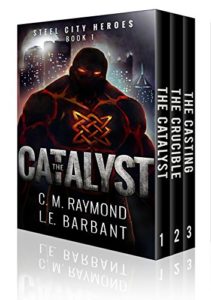 The Steel City is in desperate need of a hero.

When Sean Moretti’s powers manifested themselves, a lifetime of comic books taught him what to do. Already struggling to make it as a normal college student, his new found ability to sense energy in those around him did nothing to simplify his life. As destructive forces descend upon Steel City, he must learn to channel his potential, or die trying.

Willa Weil has a secret—she comes from a long line of magicians trained to unlock the power hidden within poetry. This skill requires discipline and the Guild demands obedience. Willa has long kept her power to herself, but when a molten metal creature threatens to consume her friends, she can no longer remain on the sidelines.

History professor Elijah Branton moved to Pittsburgh for the job of a lifetime, researching the family history of one of the nation’s wealthiest and most attractive CEOs. But not everything is as it seems in the Steel City. The historian soon unearths a deadly conspiracy that threatens to unravel his world.

Can they save their city, or will they lose themselves in the process?