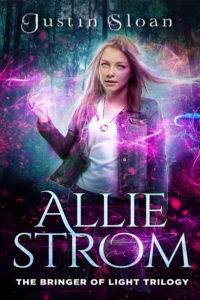 My urban fantasy Allie Strom: The Bringer of Light Trilogy book is now out and has a cool new cover!

Allie is starting seventh grade in a new school, and just wants to fit in. Little does she know, she’s about to discover it’s up to her to save her missing mom, confront evil, and find missing ancient relics they’ll need to defeat Samyaza and his fallen angels once and for all.

ALLIE STROM AND THE RING OF SOLOMON (Book 1)

Allie thinks she’s a normal kid with normal problems on her first day of seventh grade. She hopes for a fresh start despite her mom being overseas with the Army, again. But none of that matters when she discovers that her mom has gone missing.

On the same day of her mom’s disappearance, Allie finds the necklace her mom was never without. When the necklace magically teleports her new friend Daniel and her to Central Asia, she learns her necklace contains an ancient magic; the power of the ring of Solomon, which she must use to fight off an army of darkness and a giant with eyes of fire.

Most important of all, the necklace appears to be the key to finding her mom.

ALLIE STROM AND THE SWORD OF THE SPIRIT (Book 2)

In the second book of the Bringer of Light trilogy, Allie Strom returns to school only to find out a normal life may never be her thing.

Instead she finds herself in intense training to fulfill her destiny of becoming the Tenth Worthy and stopping the dark forces led by Samyaza, and finds herself questioning how involved she’s ready to be.

Will she pull herself together in time to stop the evil forces and rescue the missing kids from book 1? Will she find Samyaza in time to stop him from taking the power of the Tenth Worthy for himself? Read on to find out for yourself.

In the final book of the trilogy, Allie Strom has become a true superhero as her war against evil takes her to Japan, a spiritual plane, and the underworld. She must face her destiny of becoming the Tenth Worthy, go to war with the fallen angels that have risen to power after the fall of Samyaza, and once and for all save the world.