Early the next morning, Marisol’s head still hurt from where the guy had sucker-punched her the night before, and it was made worse by the bumping of the biofuel-belching tactical vehicle as it made its way down the pot-hole covered street.

The Apes often hunted at dusk, or in the blue light of pre-dawn, though this time she had hoped for a bit of rest before being woken up and told to grab her gear. But like the good Ape she was, she had pulled herself together and here she was just like the rest of them, clad in molded Nomex gear, strike helmets, poly-fiber boots, and lugging their well-lubricated assault rifles.

She was at work and the operations always began the same way.

An alarm would sound overhead, a teeth-chattering howl from a metal box bolted to a spit of thick wood, and the Apes would be roused from their bunks and on the move, gathering up their equipment, rations and weapons, before heading out of what passed for barracks, to their rides.

Marisol was always on point, the team’s tracker. She was the one who’d been blessed with the power to smell, and to discern and to notice the small things that others missed. Nothing super-human, but a heightened awareness like many had found themselves with after the world had collapsed around them. Some found it affected their sight, others strength, but for Marisol, it was a keen sense of smell.

Sometimes, especially when stuck in a vehicle with the other Apes, she thought it was more a curse than a blessing. But when it helped her in the hunt, she wouldn’t trade her sense of smell for all the muscles or speed in the world.

“Staying alert up there, Sling?” a large, mercurial man named Harrigan bellowed. The nickname “Sling,” was given her by some of the Olders on account of the nylon strap wreathed around her rifle that she wore at all times. That was fine by her. Hell, she’d been called worse in the past.

“I’m always alert enough to smell your stench,” she replied.

“Yeah, well, you ever think of cleaning your pits before coming on a run?”

He laughed. “Wouldn’t wanna deprive the world of my natural body odor.”

“Gotta admit, Sling,” Farrow said, “Harrigan’s funk is so bad, we can’t help but know where the man is at all times. Group accountability is a plus.”

“The silver lining, huh?” Marisol laughed. “I don’t know how you always see it.”

“I was born to a family of love, Sling. Is it my fault all of ya’all’s lives were depressing as shit?”

She laughed, though the reference to family stung. Her family… well, she had no idea where the hell they were. No real idea anyway. They were most likely dead, but she’d never been given definitive proof. In actuality, they’d gone off one day to fight for the dictator when she was only a child, and hadn’t been heard from since.

She struggled to think of something else and kept coming back to her place amongst the Apes. She was a year beyond her eighteenth birthday, a young woman in a world full of dour-faced, knuckle-dragging men. One of only two female Apes, those that hunted, the Olders looked upon her with equal parts of lust and contempt. She had skills that they would never know, and it pained them to acknowledge that her aptitude lay in the things which they could not do well, particularly the catching of the prey scent, that change in the air which indicated the closeness of those they pursued, the Runners.

A scent of Farrow caught her attention—heavy but smooth, like fresh cut pine—and she found herself smiling. He was the only one really that was ever there for her. He wasn’t blood, but he was the only thing that passed for family now.

Some of the other Apes had a habit of mocking her, sometimes because of her sex or age, but mostly because of her heritage. They teased her, saying her innate sense of smell had to be the result of being born of laborers, those who worked and trawled the earth, their noses in the fruit that they undoubtedly plucked as illegals down south on the other side of another mighty wall that had been constructed before the world ended.

She called the male Apes “Olders” or “Grizz” because they were grizzled and hanky and smelled of rot and sweat and things that she could not place.

To a man, her colleagues had lived by the way of the gun before First Light; that is, each had survived in an occupation that required a firearm. Some, like Farrow, had been cops, others general purpose soldiers or security guards and the like. All of them now labored in the service of the man who ran the Codex Guild, the Guild of Guilds: Longman, the king of kings and lord of hosts and the unquestioned ruler of New Chicago.

She shuddered at the thought of Longman.

Before she was taken with some of the others into the Q-Zone (the land on the other side of the wall wedged between New Chicago and the domain of the Thresher), her mother had told her that Longman was like a figure in a long-forgotten book scribed for little ones: a book detailing the journey of a lost girl and her dog to see a strange man who pulled strings from behind a curtain in an emerald city.

New Chicago was no emerald city.

It was a hardscrabble little outpost of civilization plopped down amidst fields whitened with alkali, and peopled by the oppressed and those beholden to Longman.

The entire city was built on the back of the ruby-tipped plants that Longman’s men cultivated inside what was once a mighty sporting arena.

The plants, and the drugs that could be produced from them, kept the machines humming and Longman in power.

In turn, Longman being in power kept the system of law and order called Absolution in place.

Borrowed from a period that existed in a time before memory called the Middle Ages, Absolution was the method by which crimes and wrongs committed by the offspring of the powerful were resolved.

While not clean or bloodless or without controversy, Absolution resulted in something much prized in the days after First Light: certainty, closure, no chance for endless appeals or investigations, no manipulation of evidence or words of the accused by high-minded judges, or honey-tongued expert witnesses, or interpreters of the law.

For a not-insignificant fee, the wrongs done by the scions of the powerful, the members of the Guilds, were figuratively placed upon younger men and women called Runners that had been trained from a young age to run and hide and evade capture from those who would hunt them down in the name of the Guilds.

In a way, she could almost understand it, and feel like she was making a difference in this world. Carrying out justice.

For Marisol was one of these, an Ape: a hunter whose job it was to stalk and bring down the Runners, to mete out justice, to do what was right on behalf of those that had been wronged. For all she knew, Absolution was the way now, and the way was right.

The tac vehicle bucked and fussed as it clipped through downtown New Chicago. Marisol pressed her face to a cracked cube of glass wedged over a gun-slot.

She stared outside and watched a decaying bridge of metal and stone as it whipped past. Beyond this, she observed the Mudders who labored retrieving grainy sludge from the river in buckets to be stacked like ice blocks in igloos to form low-density dwellings. Working alongside them were Scrappers, hearty men who hiked to the outer reaches of the city to strip the remaining fragments from the corpse of the old world.

One of the Mudders, a boy as thin as a strand of hair, gestured, and Marisol offered an indifferent wave in return. She’d heard Farrow and the other Apes mention the times before, when there was a growing movement by the well-heeled to utilize all things local.

She watched the laborers through the window, wondering what their lives were like as they plied all they could from what remained of the past.

She smiled wistfully, realizing that it was all local now.

No more commerce between states, no more globalization or international diplomacy.

No more war, really. Not with other countries anyway.

Everything around them, everything they knew and could see, that was it. She could see her whole world from the front stoop of the barracks.

“You’re obsessed with the old days, Sling,” said Farrow, who wedged himself into a position on Marisol’s right. Her gaze ratcheted to the big man, who was busy feeding copper-jacketed metal projectiles, or slugs as they were called, into an ammo magazine that dangled from the bandolier that wreathed his midsection.

Farrow registered this and shook his head. “The only time that matters is right here and now.”

Marisol scrunched her nose at the lie, then quickly masked her emotions. It was a lie and she knew it, but to acknowledge that it had been better before would be to diminish their belief that somehow the present was something other than a slick of bare gruel barely worth fighting for.

She couldn’t blame him though. Farrow had lost his own child and wife in the months when the world went to hell …when the power went out and the cities fell and the looting began and precious word slipped out about abominations being committed on the high plains.

FROM JUSTIN >>> This is the final snippet! Yay! I just got back from Disneyland and am EXHAUSTED, so… help spread the word if you like the book, so I can sleep for a week or so 🙂 Just joking, I have too much writing to do! Thanks to George for pulling this book together, and wish our launch luck!

And if you liked this, check out the new book by John L. Monk: 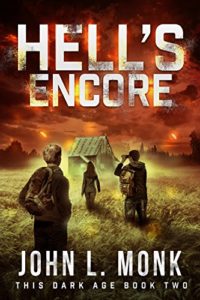