The thought of the dead-eyed monsters was enough to send a chill up her spine, so she wrapped her arms around herself and hunkered down, eyes on the gravel path before her. That’s when she saw the purple glow of light reflecting on damp cement ahead. Marisol looked up and smiled.

“The Fallen Hero,” she said, reading the name of a local bar with a smile. “My only friend.”

As if in welcome, the bar’s sign blinked off for a moment before flashing back on with a spark, and she laughed. “It’s good to see you too. Now give me a goddamn damn drink, you asshole.”

Each step felt a little lighter now, excitement boiling up inside her.

A hissing sound came from nearby and she passed the corner of the building to see a man standing there, pissing. He turned to face her, not bothering to cover himself or even to stop urinating.

“Come on, man,” she said, shielding her eyes as he shook. She kept walking, but heard a zip and then footsteps. She stopped. She could hear the man advancing on her and so she warned him, “Walk away, dickhead.”

She turned and he pointed at her.

“Hey, you got a problem with me? You’re not better than me, you’re a piece of shit!”

She paused, watching trickles of piss running down the front of his worker pants. The guy was sloshed.

“I’m just here for a drink” she said.

“My son was a Runner. Keyword, was. He was gunned down by one of your people.”

“Then he did his duty for the survival of society,” she said, and nodded. She tried to turn, but the man closed the distance between them quickly and she found his thick hand on her shoulder. On instinct, she turned with a fist forming and then clocked him across the jaw.

He fell to the ground with a yelp, and sat there staring up at her with fury.

“I’m sorry for your loss,” she said. “I really am. But that doesn’t give you the right to touch me. Now get the hell out of here.”

She walked off, relieved to hear he wasn’t following. The last thing she needed right now was to have to beat the hell out of him and get in some serious trouble. Double doors soon opened to the smell of fermented bread and potatoes, sweat-slicked men and women, and—she sniffed and cringed—yes, that was definitely vomit. Sometimes having an enhanced sense of smell wasn’t a good thing.

Sitting in the corner, by himself in the shadows, was Farrow. Clad in a tactical vest and black pants, Farrow was just turning the corner on forty, a broad-shouldered, hulking bruiser with a surprisingly soft side. A broad grin splashed across her face.

“The hell are you doing here?” he said when he looked up to see her standing over his table. “Stalking me, I see.”

“Something like that. Or, maybe the world just doesn’t revolve around that gigantic head of yours. Besides, a lady can get herself a drink every now and again, right?”

She gave him a look and a wink and he laughed, then motioned for the bartender to bring another glass of the only drink they served–a mixture of fermented bread and potatoes, which explained the stench.

“Have mine while we wait,” he said, sliding it over. “It’s my second anyway.”

“Aw, you sweetheart.” She took a swig and had to suppress her gag reflex, then swallowed. She soon took another slug of the liquid that tasted like a combination of mouth-wash and battery acid.

Farrow laughed. “You should see your face every time you take a drink.”

“Imagine a donkey. Now imagine that donkey getting rammed by an elephant, while someone screams in one ear and someone else sticks dead rat guts up its nose,” Farrow said, laughing. “That’s you, girl!”

She wasn’t sure whether she wanted to laugh or vomit at the thought of that. Instead she just took another swig, trying her best to control her expression this time.

He laughed, and nodded his thanks to the bartender for bringing the second drink. She waited for him to drink, and made a tsking sound as he swallowed, straight faced.

He smiled, but looked down at his black suit, then over to hers. His finger reached out and traced the red line of her sleeve, then pulled back for another gulp. “Drink enough of these, it’s like second nature.”

She nodded, wondering if he was still talking about the drinks.

“The other guys… they treating you well?” he asked. “Nothing I need to worry about?”

The levity drained from her face.

“I can take care of myself, Farrow.”

He nodded. “Yeah, but that doesn’t mean you should have to. I got your back, any time, any place.”

The blood rushed to her head, and she wasn’t sure if she was blushing or feeling the effects of the alcohol. “To my valiant hero,” she said, mockingly, raising her glass.

“To the most badass chika I’ve ever known,” he said in response, his own glass raised. They clinked glasses and each took long swigs.

“You realize this stuff is nasty, right?” she asked.

He laughed. “The worst. But, there’s nothing else, so it’s also the best.”

She smiled and gave a nod of acknowledgement. The window showed her reflection, and for a moment she stared at the red lines running along the side of her black suit, then sighed.

“Does it ever get easier?” she asked.

“I assume we’re not talking about the drink, huh?”

She shook her head.

“No, not really. But it’s like taking a shit. Sometimes it hurts, sometimes it stings like a bitch, but it’s something you gotta do if you want to eat … and live, for that matter.”

She cringed. “That was wildly gross and, yet, a perfectly accurate simile.”

“That’s what I do,” he said with a final gulp of his drink. “Help you survive, while educating you on the ways of the world.”

She finished her drink and stood, then pretended to dodge left, then right, hands up as if boxing. “You want to teach me something, come try me in the ring and see what happens.”

“After what you did to Lefty last time? No way in hell. I prefer my nuts to work, should I ever need them.”

He deserved what he got.

The laugh was cut-short by an image outside, something just past her reflection. The guy who had accosted her outside stood glaring on the other side of the window.

“Is this a problem?” Farrow asked, glancing over his shoulder.

“Just a little pest,” she said, ignoring it, until the douchebag slammed his hand against the glass, glaring at her.

Farrow stood, and the guy flipped him off.

“Yeah, okay,” Marisol said at that, and the two went for the door.

The guy was waiting, a wicked smile making his face look even uglier, if that was possible. As soon as Marisol and Farrow stepped away from the door, three of this guy’s buddies stepped out from the shadows, all looking tough and pissed.

“This is the bitch I told you about,” the man said.

“Go sit on this,” the man said, pulling a knife from where he’d been concealing it behind his back.

Farrow moved in a blur, and a moment later Marisol was cursing and moving in for the fight too. The man had his cohorts to back him up, but that didn’t help him given the speed with which Farrow moved.

The knife was swung and Farrow blocked it, latching a hand onto the attacker’s wrist and snapping the man’s arm so that he fell to the ground with a shriek, his arm hanging at an unnatural, sickening angle.

The largest of the other attackers swung for Marisol.

The man’s fist caught her jaw, sending her to the ground. Pissed that she’d been struck, she pushed herself up and ducked under his second swing, and came in with a punch of her own to the man’s now-exposed ribs. Farrow was there a moment later, kicking the man’s knee out, so that Marisol was able to turn to the other two attackers.

She held up her hands and said, “You two can still run away.”

When the one with the beard charged, she swept him aside with her hands in an alternate half-moon sweep, then caught him by the back of his head and slammed him hard onto an apron of concrete.

A kick nearly caught her head, but she dodged under it, felt a rush of dizziness as the alcohol hit her, and then grabbed the foot and twisted, sending the final attacker to the ground. Not so easy, she thought as she stood and twisted on the ankle again. It snapped and the man screamed, his foot dangling limply.

Farrow was on him, stomping at the man’s face, until his cries became guttural moans and then nothing.

“We gave them a chance to run.”

A quick glance around showed they had done their fair share of damage, but the screams had drawn attention, and Farrow motioned her to follow, close.

“Speaking of running. If someone finds out we did this, we’re screwed.”

“Don’t have to tell me twice,” she said, and took off into the night.

FROM JUSTIN >>> I’m posting this now because I’ll be in Disneyland this week, returning the DAY BEFORE LAUNCH day. Crazy. I might be able to get one more snippet out but… we’ll see.

So I hope you enjoy what you have here enough to be interested in buying the book!

As you saw at the top, it’s on preorder 🙂

And if you’re looking for more fiction like this, check out the work of BOYD CRAVEN. 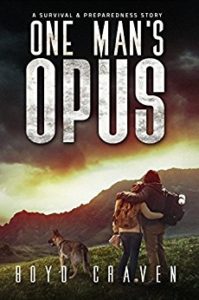