Marisol, or “Sling,” as some of the Olders called her, held her rifle at shoulder level to peer through the scope, searching, hunting. The dark blue skies of pre-dawn cast a blue hue across New Chicago, and then she saw him, saw the man in the window, always staring out from that skyrise, one of the few that remained, gazing in her direction.

Well, not her specifically, but to the barracks inhabited by the hunters, the area where she and the other so-called “Apes” lived.

Their predecessors, cops and national guardsmen and the like, had worked to restore law and order after First Light (the local euphemism for the Unraveling, the purported solar storm that ended the old ways) and the populace, upon seeing them arrive for the first time in their militarized, then-shimmering black gear and body armor, had nicknamed them Apes.

The name stuck and the youngest of the Apes, Marisol, took some small measure of satisfaction from seeing images in the basin of the long-dead creatures with their muscle-quilted bodies and silver backs and faces seemingly screwed up in perpetual disgust. They were strong and powerful, and so was she.

Even though she had no idea who the man watching her was, she wanted to pull the trigger and watch him fall. Anyone who peered in the direction of the Apes often had to have sins enough worth dying for. An infatuation with their trade meant a love of death.

But she couldn’t give him that gift today. It wasn’t her place, and honestly, the rifle wouldn’t shoot that far. She and the other Apes were segregated, kept far enough away from the populace, from what was left of the great unwashed masses.

Life in the barracks could be cold and cruel, but it was still better than being outside of the city. Out there, beyond the New Chicago’s great wall was darkness and the horrible things that toiled there… the Threshers. She’d never seen one personally, but she had heard stories. Rumors mostly … creatures that survivors only whispered about. Nightmarish, rapacious, brain-cleansed beasts. Humanoid animals, long-limbed abominations with skin as white as mushrooms and burned-out eyes that hid a demonic madness.

Yeah, she’d take this ostracized lifestyle any day over being cast out to deal with them.

She turned to her duty of the night, picking up the blood stained knife and shirt, and moving to the bathtub to scrub them. As often as possible, she kept her distance in a hunt. However, more often than she liked to admit, she had to move in for the kill, feeling the life drain out around her hand as she sunk her blade into flesh.

It disgusted her, but it also filled her with wonder. Wonder at the delicate nature of existence.

The blood washed from the knife easily enough, but not so the shirt. Disgusted and drained, she stripped bare and stepped into the tub, scrubbing at herself now, fighting to get clean. No matter how long she lived as a Hunter, the sensation of feeling somehow unclean would never truly go away, she imagined.

That’s what Farrow told her, anyway. When they had gone on their first hunt together, he saw the look in her eyes and said, “Embrace the darkness. Let that feeling become one with you. Better to embrace it than spend a lifetime fighting in futility.”

And embrace it she had, she thought as she toweled off and stepped from the tub. There wasn’t another Hunter alive now that could keep up with her. She had smoked them all, and meant to keep it coming too. Being the best kept her alive, and it kept her in the need.

Born several summers before First Light, she was nearly six feet tall, with a wave of copper-colored hair knotted on top, the tiniest piercing on the right side of her nose, and arms and legs that were sinewy and limber after years of successful hunts.

And because of her success during the hunts, she received the assurance that none of the other Hunters would ever touch her. That they would allegedly defend her to their last breath if needed. Yeah, she’d say that was worth training her ass off all day every day.

Standing there with the toasty, dry air of her room warming her still slightly damp skin, she considered her bed and the panties and t-shirt she had put out for the night. But it was early still, and in spite of her rule that she train harder than everyone else, she believed wholeheartedly that rewards had to be part of one’s routine.

Another successful hunt deserved another successful trip into the city for a drink. Shit, she might even have two or three. They might help wash away those last dying groans and whimpers that she never could quite block out without the help of some good, old-school basement hooch. Honestly, the underground spirits were horrible stuff, but after the senior Apes had basically forced it down her throat one night to jeers and hollers, she learned to almost enjoy the stuff. She liked it enough to return for it on nights like this, anyway.

She dressed, putting on one of seven black outfits she wore, all made of some repurposed compression material that was the required wear for her and the other Apes. It clung tight to her body like a second skin, with red lines like blood running up each side. If they were caught out in the city not wearing the sign of the Hunters, the punishment could be severe. And if they engaged in a brawl or spilled civilian blood without the outfit to let the opponent know they were Hunters, well, they might as well throw themselves to the Threshers.

Ducking out a rear entrance and sneaking around the barracks, not that she wasn’t allowed, but because she really preferred to be alone right now and so didn’t want to be spotted, she crouched and ran for the gateway. She was relieved to reach it without anyone challenging her, and then angled sideways, away from it toward a wall that she gingerly hopped over.

Marisol paused on the other side of the wall, crouching, waiting to see if footsteps or shouting followed her. Nothing. All clear.

The grass was moist from a late afternoon drizzle, but not so slippery that it impeded her descent.

She made her way across a depression in the earth, then turned to follow the canal that zigzagged along toward the heart of the city and that damned tower with the silhouette of the man who’d earlier been staring at her, still visible in the window.

Alone in her thoughts, Marisol massaged her neck and wondered what life was like for the elite in their fancy towers and skyscrapers that crowned the ground near the horizon. After the sky had fallen and that first seemingly endless night smothered the land, an America that had been slowly sipping at perdition finally took a knee.

The people that survived what came after the end of the machines, the riots, looting, fire-bombings, convulsions, and generally trying times, hunkered down in fortified keeps in the interior of cities like Chicago, which became a sort of permanent Gaza Strip/flea-market meld inhabited by the terrified and downtrodden, of which Marisol was one before she’d found her place among the Hunters.

Not all had been so lucky though, as the ghettos of the city showed.

To protect the populace, the decision had been made after the world ended to build a wall around everything, an incongruity of metal and wood that stood on the other side of what was once the South Branch of the Chicago River.

Over the last several years, the wall was strengthened with lengths of stout wood, cinderblock, metal beams, and whatever could be pried loose from the city’s industrial past. Checkpoints were added and haphazardly built turrets constructed over low points, the wall soon dividing “New Chicago” from the Q-Zone, the quarantine zone, and all the mysteries that lay beyond.

In spite of the wall (or perhaps because of it), the buildings littered around the center of New Chicago had soon started to sag, the pipes throughout the city burst apart, with thick grass and foliage sprouting up in great abundance through nearly every inch of buckled asphalt and cement.

The living kept to themselves and shared “leftover logs”—lists with the names of survivors who’d lived through the Unraveling—along with vegetables and other goods they managed to scavenge and grow in greenhouses and small plots of green up on the tops of towering, soot-stained buildings that rose out of the smudged sky like the horns on the head of some great beast.

The survivors kept vigil behind boarded-up windows and bolted doors and lived for the light. In the early years after the Unraveling, they’d ceded the night and the streets and all the lands beyond them to the misshapen things that moved under cover of darkness.

Marisol preferred not to think of this though, instead turning to look out beyond the city limits and over the sinuous banks of a wide river that curled through the center of town. Out there and beyond the wall, nature had long ago reclaimed much of what it had given up in the prior decades. Vast prairie-fields that had been denuded in the rush for farmland and acreage for corn and soy biofuels sprang up once again. Illimitable vegetation took hold in the prairie-fields, along with other things, creatures that survivors only whispered about at first.

FROM JUSTIN >>> This book loosely ties into our Syndicate Wars book, though you won’t see how for a bit! So in the meantime, hope you enjoy the first three books (Already done!)

Thanks for checking it out – warning, it’s definitely a bit darker than some of our normal books, because it’s post-apoc.

And to share a friend’s book, check out anything by J. Thorn. He’s awesome. Especially BARREN: 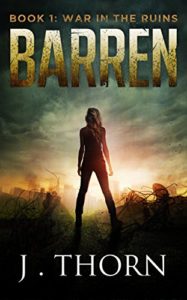