Check out the first anthology in the Seppukarian Universe! SHIFTING DIMENSIONS:

Whisked away through time loops that distort reality, a group of Space Marines explore different worlds and shifting dimensions as they combat an alien invasion. The edge-of-your-seat adventures in these alternative realities form the backbone of this anthology, which is full of exciting stories from debut and best-selling authors in the science fiction genre. Come aboard and experience exhilarating battles against mechs, drones, alien warriors with biotech armor, and tales of future combat that will blow your mind.

Featuring a Foreword by Nick Cole

Our first series following the anthology was by me, Justin. It’s called Shadow Corps, and is basically Black Ops in Space. With some science fantasy going on. Fun times! 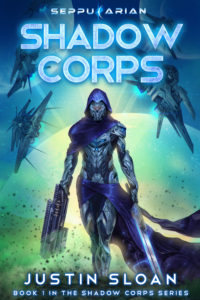 A Seppukarian Universe Series for fans of DESTINY and WARHAMMER 40K.

Jonathan Yanez and I put out a fun romp story with Marines in Space, dragons, mechs, and more in the War Wolves series.

Because the universe can’t save itself.

When others run from danger, Riot runs toward it.

When others throw up, she throws down.

And when there’s a brawl in a bar, well … she’s probably the one who caused it.

But now, the person voted least likely not to blow stuff up by her unit has been given another mission: explore the universe and forge bonds with new alien races in order to save Earth from another invasion.

Backed by her ride or die crew – the only guys she’d trust on a mission such as this – and a scientist, because, well, science, Riot blasts off in a spaceship headed to distant galaxies, the fate of the planet resting on her shoulders.

Bring the thunder is a fantastical space marine adventure with rollercoaster-like action and the kind of snarky humor you’ve come to love in movies like guardians of the galaxy.

If you like the whiplash action of The Ember War and the ridiculousness of We Are Legion (We Are Bob), then you’ll be obsessed with the War Wolves series.

George released his first book, all about awesome MECHS! Check out MECH COMMAND: 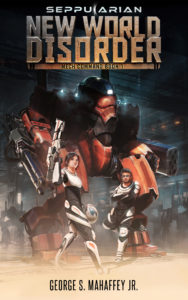 MECH COMMAND: WHEN IT ABSOLUTELY, POSITIVELY, HAS TO BE DESTROYED OVERNIGHT

Once upon a time, the Earth had protectors.

They’re all gone now, vaporized during an alien invasion that has only recently ended.

What’s left behind is a small group of survivors led by a former scavenger named Danny Deus, who’ve been selected to compete for a spot as operators in the Mech Command, a global mechanized fighting force dedicated to defending the Earth, kicking the crap out of wannabe alien invaders, and looping back through time every now and again.

What most would consider a lifetime’s worth of work—battling extraterrestrial bad guys and saving the universe—Danny and the operators call a busy Tuesday.

If you enjoy over-the-top sci-fi action, cool mechs, and smartass characters, saddle up with the Mech Command and enjoy a series that’s been described as READY PLAYER ONE meets PACIFIC RIM.

And the original series, or the prequel to all these spinoffs, has over 100 reviews now! Check out SYNDICATE WARS: 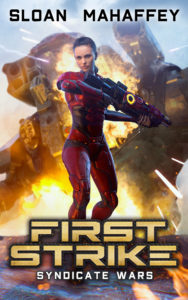 Earth may have just became the universe’s toilet, but Marines don’t get shat on without a fight.

“A must read for all science fiction fans who like their characters three dimensional, the action exciting and the story unexpected.”

With an alien invasion and survival of the human race at stake, service in the Marines was no longer simply about honor and duty, it was a matter of life and death.

This was especially true for Quinn, a Marine sergeant who was hell-bent on ensuring that her young daughter had a world to grow up in. No one stands a chance, but the invasion isn’t what it seems. The others don’t see this, but one thing separates Quinn from the others:

And as the aliens will learn, it’s tough to keep a good woman down.

“A space opera with heart, great characters, and neverending action, the set-up will suck you in and the characters and story, including a very cool time-travel hook, will keep you wanting more.”