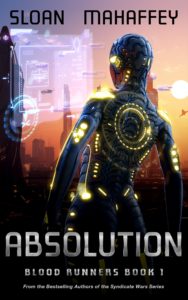 You might have seen our upcoming Blood Runners release. If you’re interested, stay tuned – the books are coming out shortly! Below is a little snippet from the book, to give you a taste of what we’re going for.

In a futuristic New Chicago where justice is meted out via a barbaric system called Absolution, you can either level up or check out.

Nobody knows this better than Marisol, a super-powered tracker whose job involves hunting down “Runners,” people who’ve been paid bounties to become suspects in crimes committed by the wealthy.

On the verge of becoming the city’s premier Hunter, she stumbles upon a young Runner who holds the key to a conspiracy that could topple New Chicago’s dictator–and threatens everything she’s ever believed in.

She toweled off and stepped from the tub. She was only level three but had been smart about where to assign points and lucked out once or twice with the type of blood she’d earned. There wasn’t another Hunter alive now who could keep up with her. While not as high of a level as most, her powers meant she’d smoked them all. She meant to keep it coming, too. Hell, that had been before her upgrade and the sense of smell and other benefits it brought.

Being the best kept her alive, and the others saw her value. It wasn’t just her blood upgrade, either. She was a natural badass. Born several summers before First Light, she was nearly six feet tall, with a wave of copper-colored hair knotted on top, the tiniest piercing on the right side of her nose, and arms and legs that were sinewy and limber after years of successful hunts.

And because of her success, she received the assurance that none of the other Hunters would ever touch her. She was to be cultivated, and her blood was now special. That they would allegedly defend her to their last breath if needed. But she had to prove herself, continue to earn her spot, if she wanted their devotion. And that devotion was worth training her ass off all day, every day.