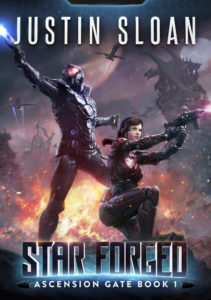 My Ascension Gate series is live! Grab books 1-4 now, and the first two in audio. If you like Space Marines in crazy battles, this is for you.

A gateway to the stars. A colonization mission gone wrong.

The Marines hold the fate of our universe in their hands.

It was supposed to be a peaceful exploration, Earth’s first step in expanding to the stars. But, no plan survives first contact. Thrown into a battle for survival against the deadliest threats imaginable, the Marines must contend with ice and desert planets with mysterious creatures, along with a history of turmoil that threatens to spill over to Earth if not checked.

Meanwhile, a genetically-engineered threat rises on Earth—one that holds the secret to this intergalactic war.

Will our heroes in space survive long enough to make a difference? Can Earth’s forces solve the mystery and put the pieces together in time?

They damn well better hurry, or an ancient, long-forgotten enemy will gain an unassailable foothold in their control of the universe and all within.

The first book in the Ascension Gate series. Fans of Stargate, Pern, Battlestar Galactica, and Mass Effect will fall for these military space fantasy books.

⭐⭐⭐⭐⭐ “The marines were hardcore and great! The mysteries were intriguing. The fights left me wanting to jump in and help. And the end made me want to start book 2.” – Tenkey, Amazon Reviewer

⭐⭐⭐⭐⭐   “The start of tales involving DNA, weapons, magic (higher tech), sex, space, etc what more do you need like I said ha the makings of an outstanding space opera thanks Mr Sloan.” – Amazon Customer D.M.

⭐⭐⭐⭐⭐ “If you like your characters believable, your action intense and adrenaline-inducing, your space dragons unexpected, and your sci-fi blended with reality in a way that makes you go “what if…?” then this is the story you’re looking for.” – Leo Roars, Amazon Reviewer

⭐⭐⭐⭐⭐ “Told in a super-fast double-narrative style, as the action moves breathtakingly between Trent’s from the Krastion Galaxy and Shrina’s on Earth, this book – #1 in the Ascension Gate series – is an absolute sure-fire 5-star winner, that should be speeding its way to your eager eyes as soon as your bookstore opens. Grab a copy today – and tell all your friends!”  –
Rosemary56, Amazon Reviewer

(Find it on Amazon and Kindle Unlimited)