“I must die,” Valerie said.

Neither Sandra nor Jackson seemed to hear her, as Sandra was too busy arranging a cheese and wine sampler that some of her customers had ordered, while Jackson stood at the entryway to the backroom where they were all huddled. He kept pulling the curtain aside and nervously glancing out.

Valerie looked over her shoulder at Diego, going through one of the crates of supplies that had recently been delivered via blimp from Europe.

“Thank God this shipment made it through,” he said, closing the lid and turning to them with a smile. “All accounted for.”

“Good.” Sandra sliced chunks of cheese from a block, but this one she held as if she was going to take a bite. But right when it was close to her mouth she pulled it back to say, “One more damn shipment intercepted by those pirates, and I swear to god I’ll figure out how to become a vampire and go after them myself.”

“What?” Sandra asked. She looked at the others, who looked equally confused. “Did we miss something?” END_OF_DOCUMENT_TOKEN_TO_BE_REPLACED

Sandra glanced over her shoulder through a window, wondering if she’d really just seen Valerie running across a rooftop and then disappearing over its side.

No, she had to have imagined it.

“What is it?” Diego said, moving to the window beside her and gazing out. He shrugged and smiled back at her. “Looking to see shapes in the clouds? That one looks kind of like a snake, right?”

“Huh?” she glanced back out and saw what he was talking about. Though, if you considered the sunlight at its tip, she could almost see it as something more humorous, and laughed.

Then he saw it too, and rolled his eyes. “Let’s stick with snake.”

“Call them whatever you want,” she said. “That one’s pissing sunlight all over us.”

“You know, you’ve gotten weirder lately.” He made his move by sliding a little wooden play piece across the board, and smiled. “Usually I like it.”

“Just not when it involves clouds that look like man-parts?”

He laughed. “No, I guess even then, too. Your turn.” END_OF_DOCUMENT_TOKEN_TO_BE_REPLACED 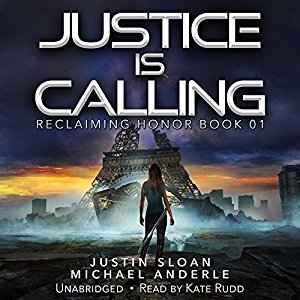 Have you been waiting anxiously for the Justice is Calling AUDIOBOOK? Your wait is over!

And OH. MY. GOD. Kate Rudd is the most amazing narrator ever, and she agreed to do this one. I am giddy, haha. You might know her from The Fault in Our Stars by John Green, TimeBound by Rysa Walker, The Queen’s Prisoner by Jeff Wheeler, and A Shade of Vampire, by Bella Forrest. WOW, right?

The daughter of a vampire and sister of a devil walking, Valerie finds out she has something neither her brother nor her father possesses: she has honor.

Now, she needs to flee a brother who leaves her for dead. Because, if there is one thing Valerie understands it’s that justice doesn’t turn the other cheek.

One hundred fifty years after a near apocalypse, the world is rebuilding. Survival has become the only rule, and justice is in short supply. Now, justice has come calling.

Justice Is Calling is part of The Kurtherian Gambit Universe.

For a free copy, you can do a trial on Audible HERE, or you can head over to the Reclaiming Honor Facebook page to see if you’re one of the first to comment and get a review copy. Be sure to like the page regardless, for updates on the book 2 audiobook and upcoming book 3 ebook.  END_OF_DOCUMENT_TOKEN_TO_BE_REPLACED